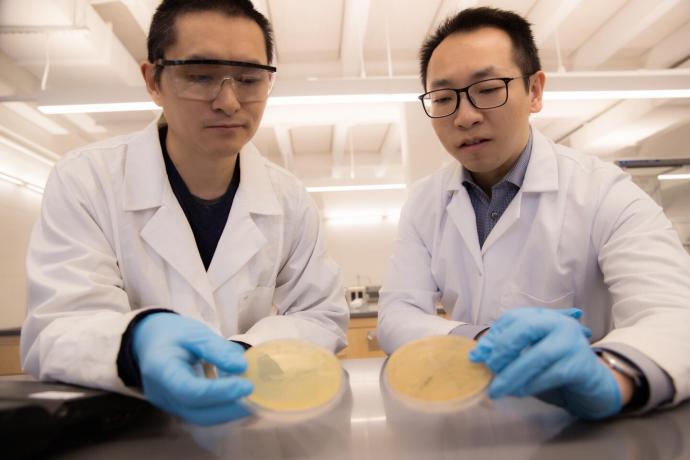 NJIT researchers find “catalyst” behind a rare bacteria’s ability to feed on and remove the contaminant 1,4-dioxane from impacted groundwater and drinking water.

While not featured on most product ingredient labels, the organic chemical stabilizer and manufacturing byproduct, 1,4-dioxane, can be found in countless everyday household items — from shampoos and cosmetics to laundry detergents and antifreeze.

Partly due to its widespread use over many decades, the chemical has now been implicated by the Environmental Protection Agency (EPA) as an “emerging contaminant of concern” at groundwater and drinking water sites across the U.S., with no effective method for its removal yet established.

Now, scientists at New Jersey Institute of Technology (NJIT) have uncovered a rare enzyme in bacteria with the ability to degrade the “likely human carcinogen” and water contaminant, 1,4-dioxane.

Researchers say the discovery could help lead to more effective means for treatment of water contaminated by this highly-soluble chemical, known for its resistance to conventional water purification and treatment efforts.

“Many products we use every day use a mixture of more than 100 chemicals, and we don’t realize that some of them contain traces of 1,4-dioxane that are washed down our drains and released into the environment,” said Dr. Mengyan Li, assistant professor of chemistry and environmental science at NJIT. “A one-time exposure isn’t extremely toxic, but contamination in drinking water can have a chronic effect that raises cancer risk.

“What we are doing is studying microbes that actually consume this contaminant as their food,” Li explained. “We hope this research can attract public attention to the idea that bacteria can be very effective in removing contaminants like 1,4-dioxane from the environment or via engineered venues.”

In their study, Li and NJIT research colleagues Daiyong Deng and Fei Li analyzed a key enzyme associated with the unusual metabolic abilities of Mycobacterium dioxanotrophicus PH-06 — a microbe capable of feeding on 1,4-dioxane as its primary source of energy.

Li’s lab was able to identify and characterize the critical role of one enzyme, propane monooxygenase, which leads the way in decomposing 1,4-dioxane’s stable circular structure so it can be converted to fuel for the bacteria.

“What makes 1,4-dioxane so stable and hard to decompose is that it has a circular structure,” said Li. “What this bacterial enzyme does is the most difficult task…it begins to disassemble this circular structure and break it apart so that it can be more easily degraded by other enzymes.

"One might think of this enzyme as leading the charge of an army that is sieging a heavily protected fortress," Li added. "It is on the front lines making the breakthrough so the reinforcements can join in."

Since the 1950s, 1,4-dioxane has widely been known as a stabilizer for chlorinated solvents or a manufacturing byproduct of pulp, textiles, electronics and other products. However, in 2016 the EPA included 1,4-dioxane in its initial list of 10 chemical substances scheduled for human and environmental risk evaluation under Toxic Substances Control Act reforms passed by the Obama administration.

According to water quality testing data from local utilities throughout the U.S. between 2010 and 2015, 7 million people in 27 states are served by public water systems with a higher 1,4-dioxane concentration in their drinking water than 0.35 parts-per-billion (ppb)—a concentration level that can marginally increase cancer risk. According to the EPA, 0.35 ppb is a reference concentration level representing a 1-in-1,000,000 lifetime risk of cancer. At 35 ppb, the risk increases to 1 in 10,000.

"1,4-dioxane is miscible with water and that is what makes it a problem," explained Li. "Many organic pollutants are not quite water-soluble so they maintain a certain contamination area and won't spread. In contrast, 1,4-dioxane is extremely soluble so it will migrate…it can move everywhere."

"In our own investigation of New Jersey's Hackensack River, we found hot spots with a high concentration of over 5 ppb, which is at least 10 times higher than the EPA guidance level," said Li. "But this isn't just an issue in Long Island and New Jersey…it can be an issue globally because everyone uses products like shampoos and detergents almost every day."

According to the most recent data on environmental releases from the EPA's Toxics Release Inventory, approximately 675,000 pounds of 1,4-dioxane were released to the environment in 2015.

Along with the rise of the chemical released into the environment, estimated cleanup costs in hot-spot locations like Long Island have also risen to such a degree due to a lack of cost-effective and environmentally safe approaches to treat the problem.

Li says some remediation approaches, such as treatment with oxidizing chemicals, can be too costly and are not known to be eco-friendly. Other efforts that apply absorbents to trap water contaminants typically require additional treatment to prevent land disposal problems where the concentrated chemical is released back into the environment.

"We think the best way forward is to have the microbes eat the 1,4-dioxane," said Li. "They naturally eliminate this contaminant by converting it into their biomass and into carbon dioxide. When you tackle large-scale environmental issues like 1,4-dioxane contamination, it is better to have a sustainable solution."

Li's lab is now seeking to develop new approaches to monitor and accelerate the performance of the newly discovered bacterial enzyme. The team is also exploring ways to scale up application of 1,4-dioxane-consuming bacteria for field use. With more study, Li's lab soon hopes to demonstrate the feasibility of microbe-based 1,4-dioxane remediation efforts outside of the lab.

"There are numerous environmental factors that might affect the microbes' performance if you were to simply inject these cultures into places of contamination directly, so we have to study that further," said Li. "However, drinking water facilities may be able to use add-on facilities like bioreactors or biologically active filters where water passes through the system, and the bacteria inside consume the 1,4-dioxane so that the discharge is clean water. That could be a treatment we apply, and I believe we are getting there."