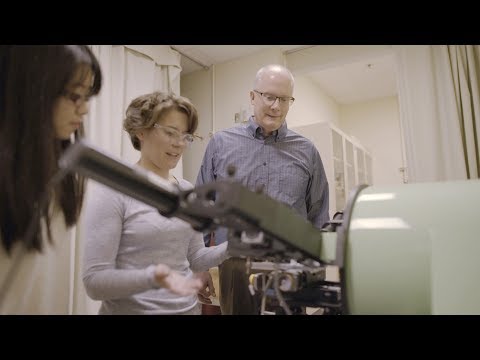 BME/ChemE’s Bob Tilton and Todd Przybycien have refined the requirements of a process that turns easily accessible sand and plant materials into a cheap and effective water filtration tool.

“F-sand” uses proteins from the Moringa oleifera plant, a tree native to India that grows well in tropical and subtropical climates. The tree is cultivated for food and natural oils, and the seeds are already used for a type of rudimentary water purification. However, this traditional means of purification leaves behind high amounts of dissolved organic carbon (DOC) from the seeds, allowing bacteria to regrow after just 24 hours. This leaves only a short window in which the water is drinkable.

Velegol, who is now a professor of chemical engineering at Penn State University, had the idea to combine this method of water purification with sand filtration methods common in developing areas. By extracting the seed proteins and adsorbing (adhering) them to the surface of silica particles, the principal component of sand, she created f-sand. F-sand both kills microorganisms and reduces turbidity, adhering to particulate and organic matter. These undesirable contaminants and DOC can then be washed out, leaving the water clean for longer, and the f-sand ready for reuse.

While the basic process was proven and effective, there were still many questions surrounding f-sand’s creation and use—questions Tilton and Przybycien resolved to answer.

Would isolating certain proteins from the M. oleifera seeds increase f-sand’s effectiveness? Are the fatty acids and oils found in the seeds important to the adsorption process? What effect would water conditions have? What concentration of proteins is necessary to create an effective product?

The answers to these questions could have big implications on the future of f-sand.

The seed of M. oleifera contains at least eight different proteins. Separating these proteins, a process known as fractionation, would introduce another step to the process. Prior to their research, the authors theorized that isolating certain proteins might provide a more efficient finished product.

However, through the course of testing, Tilton and Przybycien found that this was not the case. Fractionating the proteins had little discernible effect on the proteins’ ability to adsorb to the silica particles, meaning this step was unnecessary to the f-sand creation process.

The finding that fractionation is unnecessary is particularly advantageous to the resource-scarce scenario in which f-sand is intended to be utilized. Leaving this step out of the process helps cut costs, lower processing requirements, and simplify the overall process.

One of the major reasons M. oleifera is cultivated currently is for the fatty acids and oils found in the seeds. These are extracted and sold commercially. Tilton and Przybycien were interested to know if these fatty acids had an effect on the protein adsorption process as well.

They found that much like fractionation, removing the fatty acids had little effect on the ability of the proteins to adsorb. This finding also has beneficial implications for those wishing to implement this process in developing regions. Since the presence or absence of fatty acids in the seeds has little effect on the creation or function of f-sand, people in the region can remove and sell the commercially valuable oil, and still be able to extract the proteins from the remaining seeds for water filtration.

Another parameter of the f-sand manufacturing process that Tilton and Przybycien tested was the concentration of seed proteins needed to create an effective product. The necessary concentration has a major impact on the amount of seeds required, which in turn has a direct effect on overall efficiency and cost effectiveness.

This relates to another potential improvement to drinking water treatment investigated by Tilton, Przybycien, and Nordmark in a separate publication. In this project, they used seed proteins to coagulate contaminants in the water prior to f-sand filtration. This also relies on controlling the charge of the contaminants, which coagulate when they are neutralized. Applying too much protein can over-charge the contaminants and inhibit coagulation.

“There’s kind of a sweet spot in the middle,” says Tilton, “and it lies in the details of how the different proteins in these seed protein mixtures compete with each other for adsorption to the surface, which tended to broaden that sweet spot.”

This broad range of concentrations means that not only can water treatment processes be created at relatively low concentrations, thereby conserving materials, but that there is little risk of accidentally causing water contamination by overshooting the concentration. In areas where exact measurements may be difficult to make, this is crucial.

Water hardness refers to the amount of dissolved minerals in the water. Although labs often use deionized water, in a process meant to be applied across a range of real world environments, researchers have to prepare for both soft and hard water conditions.

Tilton and Przybycien found that proteins were able to adsorb well to the silica particles, and to coagulate suspended contaminants, in both soft and hard water conditions. This means that the process could potentially be viable across a wide array of regions, regardless of water hardness.