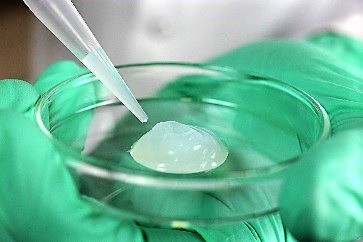 Researchers have developed an effective and low-cost method to produce water of drinking water quality through the use of hydrogel technology. The process works in conjunction with sunlight.

The new method for water purification comes from the University of Texas. The aim is for the technology to be used in remote areas and less developed parts of the work where access to clean water is limited. There is also a potential application for assisting with disaster relief, such as following a hurricane or other event that disrupts normal water supply.

The technology brings together gel-polymer hybrid materials. The material has hydrophilic (attraction to water) qualities and semiconducting (solar-adsorbing) properties, and it is a form of “hydrogel”. The primary aim of the new technology is to remove salt from water; however, the process can also remove most other contaminants.

Hydrogels are networks of polymer chains known for their high-water absorbency. Hydrogels are highly absorbent (they can contain over 90% water) natural or synthetic polymeric networks. As well as the current application, natural hydrogel materials are being investigated for tissue engineering and for use in agriculture, as they can release agrochemicals including pesticides.

The researchers have constructed a new hydrogel-based solar vapor generator. The device runs off ambient solar energy in order to power the evaporation of water to achieve desalination. According to the lead scientist, Professor Guihua Yu, who told Controlled Environments: “We have essentially rewritten the entire approach to conventional solar water evaporation.

”Commenting on the use of solar energy, the researcher adds: “Solar energy, as the most sustainable heat source to potentially power distillation, is widely considered to be a great alternative for water desalination.”

To streamline the gels the researchers turned to nanotechnology. The fabricated nanostructured gels require less energy than conventional gels. This enabled the process to be activated by sunlight alone. The new type of gel also enabled a far greater volume of water to be evaporated.

The generated water vapor is then pumped to a condenser for freshwater delivery. The process has been challenged by using water with a high salt saturation content. The process can produce up to 25 liters per square meter, which makes it suitable for smaller scale activities. In the longer term the researchers hope to upscale the technology.

The research has been published in the journal  Nature Nanotechnology.