Next Generation Solvents is Sustainable and a Mixture of Two Powders 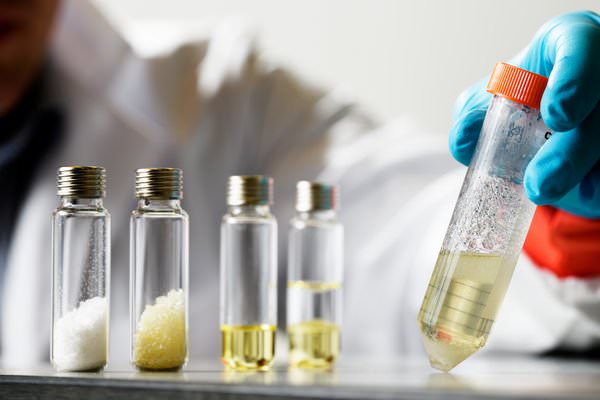 Many polluting solvents used by the chemical industry can be replaced by an amazing new mixture of two powders: ‘deep-eutectic solvents’ (DES).

This next generation of solvents are sustainable, much less flammable, not volatile and can draw contaminants from water beyond the capabilities of current solvents. On Tuesday, September 18 Dannie van Osch obtained his doctorate in this subject at Eindhoven University of Technology.

On the foreground two solids and a DES in the making, on the background the DES which has already been formed with a layer of water on top. (Image: Bart van Overbeeke); Via Eindhoven University Technology

In the chemical industry a huge quantity of solvents is used for various purposes, such as removing metallic salts from paper or extracting sulfur from petroleum. Worldwide roughly 28 million metric tons are used. The current generation of solvents have various disadvantages. Alcohol, for example, is volatile and flammable. Acetone, benzene, hexane and toluene are highly toxic, environmentally damaging and unhealthy. There is much to be gained, therefore, with the development of a new generation of solvents.

When two powders are mixed, they sometimes form a liquid with properties that current solvents lack. Such a liquid is called a deep eutectic solvent or DES. The powders can be extracted from plants. The solvent developed by Van Osch is environmentally friendly, hydrophobic, poses no fire risk, and is not harmful to health. A DES can dissolve substances that today's solvents have great difficulty with.

Plants can be considerably more sustainable than petroleum products and DES is therefore a sustainable replacement for many solvents. Many plant extracts are not toxic, which removes the health risk. The same applies to the volatility and flammability of the plant-based components. This makes DES an attractive replacement for, say, alcohol and acetone. There are many options when it comes to choosing the ingredients of a DES. Examples of DES ingredients are menthol and thymol, extracted from the mint plant and thyme plant respectively.

The importance of a water repellent DES

Water soluble DES are not new: scientific literature dating from 1918 describes that a mixture of two powders can sometimes form a liquid. Nonetheless, it took until 2015 before TU/e researchers Dannie van Osch and his colleagues developed a hydrophobic DES. The importance of a water repellent solvent is significant because it is capable of removing contaminants from water. Extractions of this kind are often performed, but are difficult and environmentally damaging. Van Osch demonstrated that with a water repellent DES it is possible to remove (heavy) metal ions, fatty acids, and vitamin B2 from water.

Future research will focus on determining the phase diagrams of DES made of various ingredients: at what proportions does the mixture of powders become liquid and what are its qualities relating to solubility. Furthermore, the solubility of CO2 in these sustainable solvents has been studied. A potential application for this is the capture of CO2. In addition, the production costs of DES must be reduced before the chemical industry can fully embrace DES.