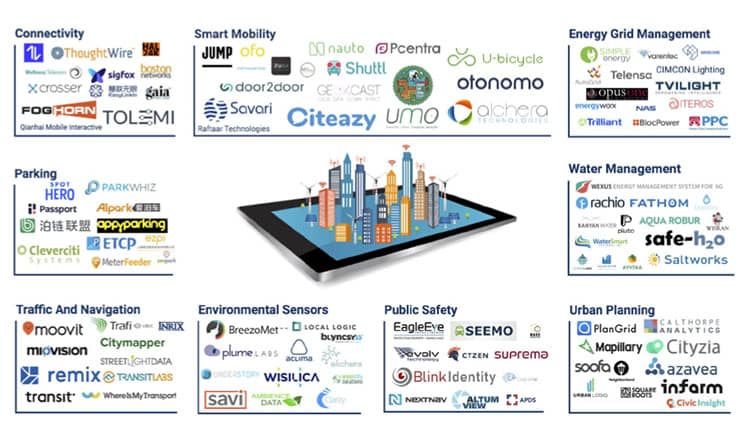 As you can see, there are a ton of other water tech startups under the water management category. Out of that list, we’ve covered Wexus, an IoT agtech company whose utility savings solution is increasingly being used in the cannabis industry, and Rachio, which offers products in smart home water irrigation. That still leaves us 11 water tech startups that are developing IoT solutions to help smart cities be smarter about how they manage their H20 supplies, from reservoir to stormwater. ( A twelfth company that was developing technology for rapidly detecting waterborne pathogens, Safe-H2O, appears to be defunct, as its website appears broken. Alert readers, let us know if there’s a different story. )

Smart water technology has largely come to represent a merger between IoT and artificial intelligence, where connected sensors and other devices supply data for algorithms that perform near real-time analytics to manage H20 systems more efficiently, as well as detect leaks and perform other automated tasks. Founded in 2011, Austin-based Banyan Water has raised about  $4.4 million  over four rounds for its analytics engine that provides insight into water costs, use, trends, and anomalies for clients in industries ranging from Fortune 500 companies to school campuses. It offers four solutions:

There’s plenty of competition in this segment of the smart water tech industry. There’s Smart Energy Water, a Los Angeles area startup founded in 2012 that claims to use machine learning to optimize both water and energy operations for smart cities. It offers products for both consumers and employees. The latter, for instance, helps workers in the field to manage scheduling and reporting tasks on a mobile platform.

Founded in 2017, Ontario-based Emagin is another company that has developed an AI platform for optimizing water management, specializing in utilities, food and beverage, pulp and paper, and chemical production plants, among others. However, it has been acquired in August 2019 by Innovyze that has a long list of products and services around smart water technology. Innovyze itself was absorbed in 2017 by a Swedish private equity firm for $270 million.

Seattle based FlowWorks, founded in 2010, goes beyond smart water management, essentially offering a full range of environmental monitoring capabilities, with machine learning gazing into the crystal ball of predictive analytics. FlowWorks isn’t picky with its data sources, slurping up insights from satellites, weather forecasts, and public datasets from agencies like USGS and NOAA.

For example, a coastal city like Richmond in the San Francisco Bay area, is interested in tracking tidal movements to manage its water infrastructure more efficiently.

Smart Water Grid is really just another way to talk about how sensors, big data, and sophisti88cated software can help automate as much of a smart city’s water infrastructure as possible. But that’s how a Phoenix-based company called Fathom describes its IoT platform that helps manage municipal utilities. It’s sort of a joint venture between publicly traded Global Water Resources (GWRS), a water resource management company limited to Arizona that started Fathom, and a few key investors/partners. While Fathom doesn’t explicitly mention it uses machine learning anywhere in the usual places on its website, its chairman and CEO wrote a whole article about the coming disruption of AI in water industry, so you figure there’s at least a data scientist or two on staff.

While the focus of many smart water tech companies is on managing the potable water supply, what happens to stormwater is no less important. Uncontrolled runoff can carry pollutants into waterways or cause severe flooding problems. Founded in 2014, Boston-based OptiRTC has raised  $10.5 million  for its cloud-based platform that combines sensor data, weather forecasts, and proprietary algorithms to control the ebb and flow of stormwater through a city‘s infrastructure to reduce pollution and mitigate flooding.

For example, in one of the smartest cities in the country ( by technology, not brainpower ), Kansas City installed an Opti system at its 1.1 million-gallon dry detention pond. In nine months, the system prevented 98% of wet weather flow into the watershed compared to about 41% with a passive system. The estimated ongoing cost to manage the system is about $0.0045 per gallon versus $3.50 to $8 per gallon or more for other storage solutions.

For details about the rest of the 11 including : Desalination for Shale Oil Fields (SalrWoks), Digitizing Water Pipes with Hydro-Powered Sensors (AquaRobur, Ayyeka), Back on the Farm (Swiim) read the

FULL ARTICLE ABOUT ON NANALYZE infographic by CB INSIGHTS