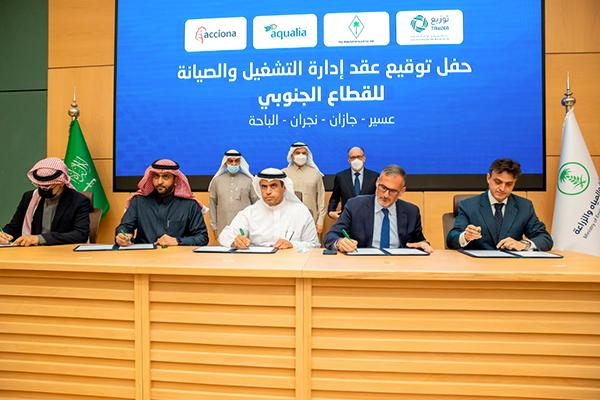 A consortium led by Aqualia (45%) and also comprising the Spanish company Acciona (25%) and the Saudi service companies Tawzea (23%) and HAACO (7%) has just won the public tender for the award of the contract for the management, operation and maintenance (MOM) of the end-to-end water cycle in the Saudi regions of Assir, Jazan, Baha and Najran in the south of the kingdom, near the border with Yemen.

The signing of the contract, which took place yesterday in Riyadh, was attended by Luis de Lope, Aqualia's International Director, José Enrique Bofill, Aqualia's Regional Director for the Middle East and North Africa, and Javier Díaz, Aqualia's Country Manager in Arabia, together with the CEO of the state-owned NWC (National Water Company) and representatives of the other three companies that comprise the consortium: Acciona, HAACO and Tawzea.

Aqualia is the official leader of the consortium according to the terms of the public tender. The so-called South Cluster, which includes these four provinces in southern Arabia and has a population of more than five million people in an area equivalent to half the size of Spain (240,000 km2), is one of the 6 clusters, territories in Arabia into which the state entity NWC (National Water Company), the client of the contract, has divided the country to make progress towards an improved management of water supply and sanitation services.

The ultimate aim of this programme of the government of the Kingdom of Saudi Arabia is to promote private sector participation in the management of water and sanitation in the country and to improve efficiency across the board.

This South Cluster contract, executed by a multidisciplinary team of experts from the consortium companies, of 9 different nationalities, will optimise the management and pursue the social, environmental, and economic sustainability of the end-to-end water cycle in the vast southern region of Saudi Arabia.