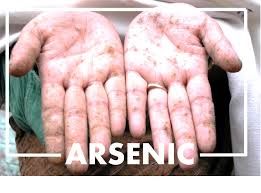 An estimate of 94 million to 220 million people around the world are potentially exposed to groundwater containing dangerous levels of arsenic, about 94% is in Asia. In similar poor areas like South America, the water security for these millions pose threats for both daily and future water needs. A new study reveals that 'understanding arsenic hazard is especially essential in areas facing current or future water insecurity.'

Arsenic is a natural element originating from the earth's crust and is distributed in the environment finding it's way in water, land, and air. In its inorganic form, arsenic is highly toxic.

People can then be exposed to arsenic at toxic amounts through the consumption of contaminated food and water, smoking tobacco, using contaminated water in food preparation and farming, as well as industrial processes.

The World Health Organization (WHO) set guidelines in understanding arsenic, which became the guide for a global map revealing arsenic hot spots, marked by the color red, showing that some of the hot spot nations include Argentina, China, Pakistan, Vietnam, Bangladesh, and Mongolia.

Safe drinking water levels are below 10 micrograms per liter, according to the study by  Science , and levels exceeding that raised concerns for the millions living in affected areas.

Although North America shows generally safe levels on the map, marked in blue to white, millions in the rural area could still be exposed to arsenic from their water wells.

From Discomfort to Skin Cancer

While organic arsenic compounds can be found in seafood and remain harmless, inorganic compounds have more serious consequences when consumed.

'Acute arsenic poisoning include vomiting, abdominal pain, and diarrhea,' as reported by the WHO, describing initial discomfort.

Long-term effects of arsenic poisoning get more serious on the skin with its symptoms including patches on the hands and feet, or hyperkeratosis, change in pigmentation.

Such symptoms occur with a minimum exposure of five years and can lead to skin cancer. Other health effects of similar exposure include diabetes, pulmonary disease, and even cardiovascular disease.

A specific disease found in Taiwan called the 'Blackfoot disease,' was found to be directly related to arsenic poisoning. This severe disease of one's blood vessels leads to gangrene.