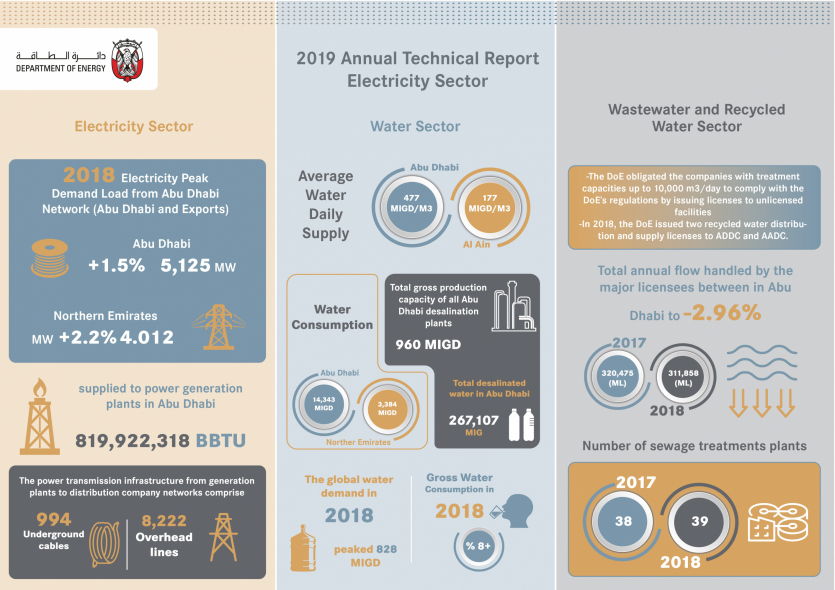 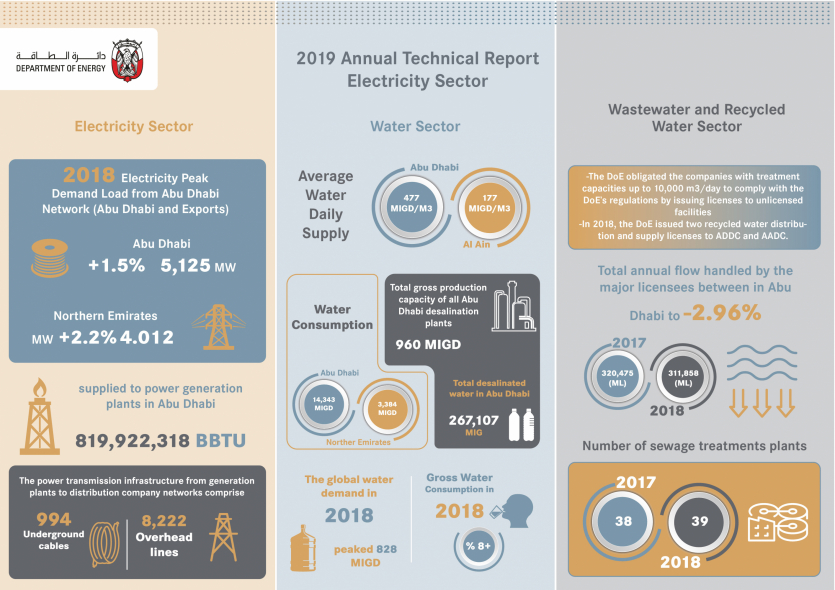 The Abu Dhabi Department of Energy (DoE) has issued the 2019 Annual Technical Report for Water, Wastewater and Electricity Sectors in Abu Dhabi, as part of its role as the regulating body, in charge of driving improvement in the technical performance of the energy sector. The aim is to enable the sector to play its critical part in driving the energy transition with improved efficiency and security of supply, while contributing to socio-economic growth and environmental sustainability.

The report features performance indicators for the water, electricity, and wastewater and recycled water, health, safety, and environment, exploring productivity rates and the developments that have transformed these sectors, as well as demand loads, transmission and distribution, and power grid performance in addition to identifying licensees in each sector.

The report has been developed based on the regulatory reports and documents submitted to DoE by the licensed companies operating in each sector across the emirate over the course of last year.

DoE Chairman His Excellency Eng. Awaidha Murshed Al Marar said: “The Abu Dhabi Department of Energy continues to lay the groundwork for the energy sector’s transformation, guided by the directives of the UAE’s wise leadership, and the local and national visions and strategies put forth to improve the sector’s performance, ensure a sustainable supply, and play an active role in the economic and social development of the Emirate of Abu Dhabi, and the UAE as a whole.”

“Implementing governance and transparency principles in the management of the energy sector is an important instrument we can rely on to ensure success in the energy transformation plan we have set for Abu Dhabi,” H.E. added. “This report offers us an opportunity to go over what has already been accomplished across various sectors in the first year of the Department’s operations. It also offers a roadmap that highlights the elements we most need to concentrate on and develop to continue along our mission.”

For his part, the DoE’s Undersecretary H.E. Eng. Mohammed bin Jarsh Al Falasi asserted that the Abu Dhabi Department of Energy works in close collaboration with all companies operating in the sector, functioning as one team with one set of synchronised goals, in an effort to cement Abu Dhabi’s status as a leading global energy capital.

The Abu Dhabi Emirate’s global water demand in 2018 peaked at 828 MIGD (3.76 million cubic metre per day), due to population, economic and industrial growth.

In general, thermal desalination accounted for 85% of the water production in Abu Dhabi while the remaining 15% was generated by seawater reverse osmosis (RO).

In terms of water quality measurement and analysis across the desalination plants, a total of 57,249 tests were completed with 64 water quality determinants examined for RO and 51 for thermal desalinated water. The overall compliance with the sampling frequency measure (SFM) was 100%, while prescribed concentration or value (PCV) was 99.91%.

According to the report, the sector generated 84,182 GWh, an increase of 1.4% on the previous year, while Abu Dhabi electricity generation assets had an available capacity of 16,622 MW.

Natural Gas remained the predominant fuel type used within the sector to generate electricity and produce water in Abu Dhabi. Both ADNOC and DEL continued supplying the sector with natural gas throughout the year without the need to burn any back-up-fuel. It is reported that both ADNOC and DEL have delivered around 819,922,319 BBTU of natural gas to the sector, which is 0.9% less than last year.

The report says that the transmission network for transporting electricity from production companies to distribution companies includes 994km of underground cables and 8,222km of overhead lines owned by TRANSCO, the sole licensee for electricity transmission in the Emirate of Abu Dhabi. For distribution, ADDC and AADC own a total of 70,394km of cable and overhead lines in addition to 34,737 substations to distribute electricity to customers across the emirate. The total number of electricity connected customers reached 531,951 by end of 2018 – 380,268 served by ADDC and 151,683 by AADC.

The 2018 System Average Interruption Duration Index (SAIDI) and System Average Interruption Frequency Index (SAIFI) for both ADDC and AADC decreased by between 14% and 16% from the 2017 figures. This has been the largest improvement since 2014 for ADDC and is attributed to company’s efforts in the past few years on the rehabilitation of the network in Al Dhafra region. Similarly, for AADC, this has been the largest improvement since 2013 and it is due to a significant reduction in the impact of weather-related incidents.

The report findings indicate that Abu Dhabi has a collection network of 8,447km, while the wastewater collected in 2018 was 311,858 MI averaging 855 MI per day. The emirate also has 39 sewage treatment plants operated by ADSSC with a total capacity of treating 1,298 MI per day of wastewater.

The average recycled water produced was 822 MI per day with 57.5% reused predominantly for landscape irrigation purposes. Recycled water quality compliance for 2018 was 99% in sanitary, 97% in microbiological and 97% in trace elements parameters. For biosolids, 48,670 dry tonnes were 100% transferred to landfill sites for disposal.

The Abu Dhabi Department of Energy is committed to educating the public, as well as researchers, investors, and media outlets, about the standards and performance of the water, electricity, sanitation services, recycled water, health, safety, and environment sectors.