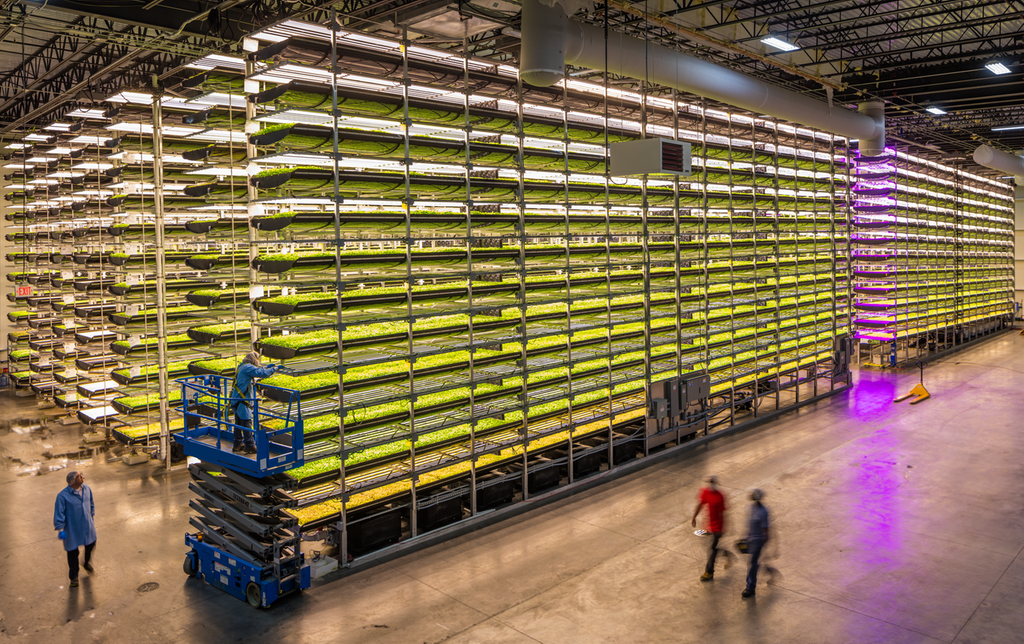 Adio partnered with AeroFarms, Madar Farms, RNZ and RDI to build agri-tech research and development (R&D) facilities and production centres in Abu Dhabi, it said on Thursday. Their aim is to explore how arid-climate countries can benefit from these technologies.

“There are few parts of the world where there’s the belief of ‘we can do anything’," David Rosenberg, the co-founder and chief executive of US-headquartered AeroFarms, told  The National . "Most places in the world, they don’t even want to be second. They want to be fifth or sixth, get it tried and true then come here, they say. In the UAE, you have boldness of ‘let’s do it bigger, better’ and that was very attractive to us.”

AeroFarms will be using the investment to build the biggest vertical farm of its kind in the world, at first testing the environment needed to grow leafy greens, Mr Rosenberg said.

"It's in line with Abu Dhabi's long-term ambitions through these programmes to attract technology, R&D, high-skilled labour ... but also to use this as a platform to expand, trial and refine these technologies and export them to the world with Abu Dhabi having led these initiatives," Tariq Bin Hendi, director general of Adio, told  The National .

Last year, Adio launched an incentive programme to accelerate the growth of the emirate’s agri-tech scene and promote innovation that is relevant locally and can be exported globally. To date, Adio allocated nearly 40 per cent of its Dh1 billion agri-tech incentive programme, which is part of the government’s Ghadan 21 accelerator initiative.

The deal, which has been in the making for six to seven months, means Adio will support the companies from set-up to commercialisation, Mr Bin Hendi said.

"We've got 24,000 farms here, so based on that, what kind of technologies can we use to drive efficiencies in crop yield, water usage and so on," he said.

Partnering with these firms to further develop the agri-tech base in Abu Dhabi could also attract others in the sector to plug into the emirate's R&D centres, while the four companies were also partnering with one another, he said.

Each of the four was tasked with solving regional and global challenges.

A look inside an AeroFarms facility. Photo courtesy AeroFarms

AeroFarms conducts research while also tackling the challenges of desert agriculture from its new 8,200-square metre facility in Abu Dhabi. The vertical farming centre, which is looking to grow its first crops by mid-2021, will employ more than 60 engineers, horticulturists and scientists.

Madar Farms, a home-grown UAE firm, will build the world’s first commercial-scale indoor tomato farm to use only LED lights, located at Kizad. The company was also set to scale up the commercialisation of micro-green growing to help provide a consistent local food supply that responsibly uses the region's natural resources.

Locally-based firm RNZ will set up an R&D centre to research, formulate and commercialise "agri-inputs" that will help to grow more with less.

Adio offered a package of cash and non-cash incentives to the companies including rebates of up to 75 per cent on R&D expenditure upon commercialisation of solutions developed in Abu Dhabi, it said.

The companies will benefit from "plentiful land, natural heat, competitive energy prices and access to research universities and skilled talent", according to the statement.

Many of Abu Dhabi’s 24,000 farms use modern irrigation and specific techniques designed to grow produce in minimal water.

Abu Dhabi Investment Office is investment in AgTech companies is expected to create hundreds of high-skilled jobs over the next three years. Reem Mohammed / The National.

Adio has a "very healthy pipeline" of companies at various stages of discussions and is pursuing other companies that can benefit from establishing a base in the emirate, Mr Bin Hendi said, without disclosing details.

"We've been looking across the technology spectrum in agriculture and reaching out to many of the entities and institutions globally that we think could benefit from being in Abu Dhabi; our programme supporting their ambitions and the long-term aspirations we both have," he said.

"We do have quite a few firms in our pipeline now in various stages of discussion... there's more to come."