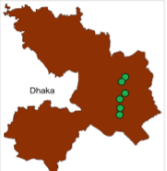 In many low- and middle-income countries, antibiotic-resistant bacteria spread in the environment due to inadequate treatment of wastewater and the poorly regulated use of antibiotics in agri- and aquaculture. Here, we characterized the abundance and diversity of antibiotic-resistant bacteria and antibiotic resistance genes in surface waters and sediments in Bangladesh through quantitative culture of extended-spectrum beta-lactamase (ESBL)-producing coliforms and shotgun metagenomics. Samples were collected from highly urbanized settings ( n =  7), rural ponds with a history of aquaculture-related antibiotic use ( n =  11), and rural ponds with no history of antibiotic use ( n  =   6). ESBL-producing coliforms were found to be more prevalent in urban samples than in rural samples. Shotgun sequencing showed that sediment samples were dominated by the phylum  Proteobacteria  (on average, 73.8% of assigned reads), while in the water samples,  Cyanobacteria  were the predominant phylum (on average, 60.9% of assigned reads). Antibiotic resistance genes were detected in all samples, but their abundance varied 1,525-fold between sites, with the highest levels of antibiotic resistance genes being present in urban surface water samples. The abundance of antibiotic resistance genes was significantly correlated ( R 2   =   0.73;  P =  8.9 × 10−15) with the abundance of bacteria originating from the human gut, which suggests that the release of untreated sewage is a driver for the spread of environmental antibiotic resistance genes in Bangladesh, particularly in highly urbanized settings.