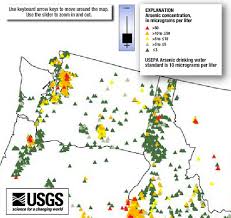 Young adults free of diabetes and cardiovascular disease developed heart damage after only five years of exposure to low-to-moderate levels of arsenic commonly found in groundwater. This was the finding of a study published Tuesday in Circulation: Cardiovascular Imaging, an American Heart Association journal.

"Low-level arsenic exposure is associated with a disproportionate growth of the heart independent of hypertension and other traditional risk factors," the study's lead author, Dr. Gernot Pichler, wrote in an email.

"The higher the arsenic content in drinking water, the greater the damage to the heart," said Pichler, who is a medical specialist at Hospital Hietzing/Heart Center Clinic Floridsdorf in Vienna, Austria.

Long-term exposure to inorganic arsenic, a human poison that occurs naturally in the Earth's crust, has been linked to various cancers, kidney damage, hypertension, cardiovascular disease and diabetes. Organic arsenic, such as what's found in seafood, is not known to be toxic to humans.

Though arsenic can be found in the air and soil, the World Health Organization says the greatest threat to public health globally comes from groundwater, which is contaminated as it flows through rocks and minerals containing arsenic.

In the United States, people who live in rural and some suburban areas can be exposed to untreated groundwater through the use of private wells.

"It is important for the general public to be aware that arsenic can be a risk factor for cardiovascular disease," Pichler said. "Private wells are currently not regulated and people using private wells, including children and young adults, are not protected."

Research has shown an association between low to moderate levels of arsenic and diabetes, hypertension and cardiovascular problems, but just how this occurs is still unclear.

Urine samples were gathered from 1,337 adults, with an average age of 30.7 years, and tested for arsenic levels. The size, shape and functionality of their hearts were also assessed via ultrasound.

None of the participants had diabetes or heart disease at the start of the study.

The researchers   found that when arsenic levels in urine doubled, the chance of developing left ventricular hypertrophy, a thickening of the walls of the heart's main pumping chamber, rose to 47%.

As the walls of the heart muscle thicken, the heart must work harder and harder to pump blood throughout the body. According to the American Heart Association, the condition is closely linked with sudden cardiac arrest, stroke and heart failure.

Study participants who had pre-hypertension or existing high blood pressure had   a 58% greater risk for thickening of the walls to occur.

"The stronger association in subjects with elevated blood pressure suggests that individuals with pre-clinical heart disease might be more prone to the toxic effects of arsenic on the heart," Pichler said.

While the study was performed among tribal populations, the study's findings can apply to anyone living in a rural location with low or moderate levels of arsenic in their groundwater, according to Pichler.

As one of the "most abundant environmental metals worldwide," arsenic affects "more than 200 million people" in more than 70 countries via drinking water alone, the University of Cambridge's Rajiv Chowdhury and Kim Daalen wrote in an editorial accompanying the study.

In the United States, the highest levels tend to be found in private wells that tap into the ground in areas contaminated by arsenic.

"The water from public suppliers must meet Environmental Protection Agency standards of less than 10 micrograms of arsenic per liter or 10 parts per billion," said hydrologist Joseph Ayotte of the US Geological Survey's New England Water Science Center.

"It's a really small amount, but there's evidence concentrations much lower than that can cause human health issues," Ayotte said, adding that several states are looking at lowering their limits to 5 micrograms per liter.

About 44 million people in the US mainland use private well water, according to a 2017 study by the US Geological Survey and the Centers for Disease Control and Prevention, led by Ayotte. Of those, over 2 million people are estimated to be drinking from wells that have high concentrations of arsenic.