Babies May Be Drinking Millions of Microplastic Particles a Day 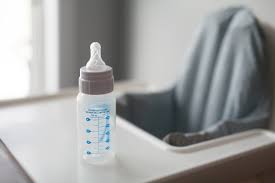 Mix up a bottle of formula for your infant and you’ll provide your little treasure with the fat and vitamins they need to grow big and strong. But in the process of warming and shaking the fluid, you may have released millions of microplastic particles (fragments less than 5 millimeters long) from the bottle’s lining and perhaps trillions of nanoplastic particles (each on the scale of billionths of a meter). The debris may get caught up in the liquid and flow into your infant’s body—with unknown implications for their health, according to a new paper published today in Nature Food .

Experimenting in the lab with 10 types of polypropylene baby bottles, representing two-thirds of the global bottle market, researchers at Trinity College Dublin found that the products released between 1.3 million and 16.2 million particles per liter of fluid. Then, by looking at rates of formula consumption and breastfeeding around the world, they estimated that an average infant consumes 1.6 million microplastic particles every day. In North America—where plastic baby bottles are more common and breastfeeding rates are lower compared to nations in the economically developing world—that figure is 2.3 million particles a day. In Europe, it’s 2.6 million, and as high as 4 million in France, the Netherlands, and Belgium.

“I think that the health implication is a big question mark,” says Trinity College Dublin materials engineer John Boland, coauthor of the new paper. “But I think the results of our study show the proximity of microplastics to food. It really suggests that now is the time to begin looking at these studies much more carefully.”

To count the release of microplastic particles from polypropylene bottles, Boland and his colleagues followed the World Health Organization’s protocol for the safe preparation of baby formula. That includes sterilizing an empty bottle in boiling water, drying it, letting it cool, then filling it with water at 70 degrees Celsius, or 158 degrees Fahrenheit. Then you add the powder, shake the bottle, and let cool, at which point it’s ready for consumption. Or in the scientists’ case, they passed the liquid through a filter and counted the microplastic particles left behind.

They actually did this for three preparations—baby formula, tap water, and deionized water—and found that each resulted in a similar number of shed microplastic particles. But because it’s easier to filter plain water for the particles than goopy formula (and because they tested 10 different baby bottle products repeatedly over three weeks) they experimented with deionized water as a stand-in for fully prepared baby formula. Their filter could catch microplastics down to .8 microns (a million of a meter) but what slipped through were the even smaller bits: nanoplastics.

“Every baby bottle released on the order of a million microplastic particles following exposure to the 70 degrees centigrade water,” says Boland. “When we look at what came beneath the filter, we found that you typically have trillions of nanoparticles, so many that it's hard to count. They tend to stick together.” So Boland and his colleagues would dilute this solution to get the nanoparticles to separate, count them, and “still find numbers that correspond to trillions per liter of the original solution,” he adds. But because there was still some nanoparticle clumping, the team wasn’t able to provide an exact quantification, like they could with the larger particles caught in the filter.

The researchers took the extra step of having an independent laboratory verify their counting technique. And sure enough, the lab, too, returned an astonishing quantification of microplastic particles—a mean value of 4.3 million particles per liter versus Boland’s 4 million. “This is a serious topic,” says Boland. “And the last thing we want to do is to unduly alarm parents about the potential exposure of microplastics. So we wanted to be absolutely certain about this.”

The team also found that the higher the temperature in their preparations, the more particles were released. Water heated to 25 degrees C—that is, room temperature—and shaken in the bottle caused the plastic to shed 600,000 particles per liter. “So mechanical agitation of the liquid against the surface of the polymer is enough to pull off some of the actual microplastics that are not properly attached to the plastic itself,” says Boland.

At 70 degrees C—the WHO’s recommendation for proper sterilization—the number of particles shed was up to 16.2 million per liter. Bumped way up to 95 degrees C, 55 million particles per liter came off the bottle and infused the solution. “The sterilization process itself exacerbates the level of microplastic formation,” says Boland, “such that, if you leave out the sterilization step, even though it's unsafe, you'll reduce the number of microplastics that are actually generated.”

Boland and his colleagues tested the same bottles repeatedly over the course of three weeks, and they found that the bottles kept releasing particles over time. One day a bottle might release fewer, but the next day its levels might skyrocket again, sometimes higher than after its very first treatment. “We saw that every bottle actually showed these kinds of cycles in the level of release,” says Boland. “What we think is happening is that as you use a bottle, you slowly start abrading the polymer.”

Polypropylene is a rubbery polymer made of layers of a tougher crystalline material and a more amorphous material. “The amorphous material calves off very easily,” says Boland. “And then the more robust crystalline material that's exposed is much more resistant to being undercut, if you will, by the water.” That could produce a cycle in which particle release peaks one day and then hits a trough the next. As you repeatedly prepare formula in a bottle, the hot water eats through the layers of the polypropylene. Boland can actually see these layers inside the bottle walls with a powerful imaging technology called atomic force microscopy. “It's almost like when you look at the side of the Grand Canyon, you see these strata,” Boland says.

“The numbers are, well, frightening,” says Deonie Allen, who studies microplastics at the University of Strathclyde, who wasn’t involved in the research. “They're terrifying. They're huge. They're bigger than any exposure tests that have been done before for human uptake.”

Previous research, for instance, has estimated that adults consume between 39,000 and 52,000 microplastics particles per year . If the Trinity team’s calculations are correct, babies fed with plastic bottles are getting as many as 4 million per day , or 1.5 billion particles per year.

To be clear, this study did not determine any implications for children’s health. “The impact of what these particles have on human health is still something that's basically unknown,” says Allen. “We know that if you breathe it, then it can end up in your lungs, in lung tissue. We know that if you ingest it, it ends up in your stool.”

So we know microplastic particles are in our bodies—we just don't know what they're doing in there. "We don't have a norm for maximum tolerable daily intake, because we're years away from that stage in human risk assessment for plastic particles," says Vrije Universiteit Amsterdam microplastic researcher Heather Leslie, who wasn't involved in the research. "So it's impossible to say if there are or are not going to be toxicological effects at the doses reported here."

Once in the human body, microplastics might release their component chemicals as “leachates,” which have previously been shown to impair the behavior of animals like marine snails. Scientists have found that a range of oceanic species we eat, including crabs, squid, and shellfish, have microplastics in their muscle tissues, meaning the particles may have migrated through the gut wall. Researchers have fed polyvinyl chloride (aka PVC) particles to dogs and found that the microplastics showed up in their blood. Fish exposed to plastic nanoparticles ended up with brain damage after the particles crossed the blood-brain barrier, a sort of biological force field meant to keep nasties like pathogens out.

“This study raises some serious questions, and it adds to the concern about the broad and widespread use of plastics and, frankly, the overuse of plastics,” says Leonardo Trasande, director of the NYU Center for the Investigation of Environmental Hazards. Trasande wasn’t involved in the study, but he coauthored a 2018 policy statement from the American Academy of Pediatrics on food additives and child health. In it he recommended not microwaving infant formula in plastic, instead using alternatives like glass when possible.

At the moment, scientists just don't have a good idea of what proportion of ingested microplastics might be sticking around in our bodies, for how long, and what effect that might have on the extremely sensitive bodies of infants. “Children have developing organ systems. Their brains are developing all the way through age 20, but especially in infancy after pregnancy,” Trasande says. “If you have a toxic injury—what little we know—you can't rewind a child's brain or body development. Many of these organ systems, especially the endocrine system, are wired in a way that the effects can be permanent and lifelong.”

The irony of this new study is that manufacturers shifted to using polypropylene in baby bottles about 10 years ago, as evidence mounted that the chemical bisphenol A, or BPA, a component of poly carbonate (not poly propylene ) baby bottles, causes developmental problems in children. But manufacturers aren’t required to methodically experiment and prove that every chemical component of polypropylene is safe for human exposure. “We’re every day learning more about the effects of chemicals that are used in plastics,” says Trasande. “But there are many gaps in our knowledge, simply because there are not safety mechanisms in place to require testing of the chemicals in polypropylene plastics before their widespread use.”

Microplastics scientists say that we urgently need more research into how the particles might be affecting human health—and that maybe, just maybe, a study this shocking might help get that research churning. “I think on the one hand, yes, this might cause and support the momentum for human health studies,” says Philipp Schwabl, a doctor at the Medical University of Vienna, who penned a commentary that accompanied the paper. “But on the other hand, also it might be a call for action to scrutinize the quality standards for plastic containers which contain food.”

In his commentary, Schwabl called the findings “an important milestone,” writing that more studies should focus on “micro- and nanoplastic release into food from plastic containers, especially where containers undergo large temperature changes or physical stress.”

In the meantime, you can take steps to reduce the number of particles that slough off a bottle and into your baby’s formula, Boland says. Temperature is a key factor. After sterilizing a bottle in boiling water, he says, rinse it at least three more times in sterilized room temperature water. To prepare the formula, do so in a nonplastic container with at least 70 degree C water. Let it cool to room temperature, then transfer it to the bottle. That keeps hot water from sloshing around inside the bottle, cutting down on the number of dislodged particles.

“I think the important learning is never, ever, ever use a microwave oven to heat anything with a plastic container,” says Boland. “Because what happens is you get in fact the local heating of the plastic and the water together, which gives enhanced levels of microplastic generation. And so that combination we think is particularly potent.”