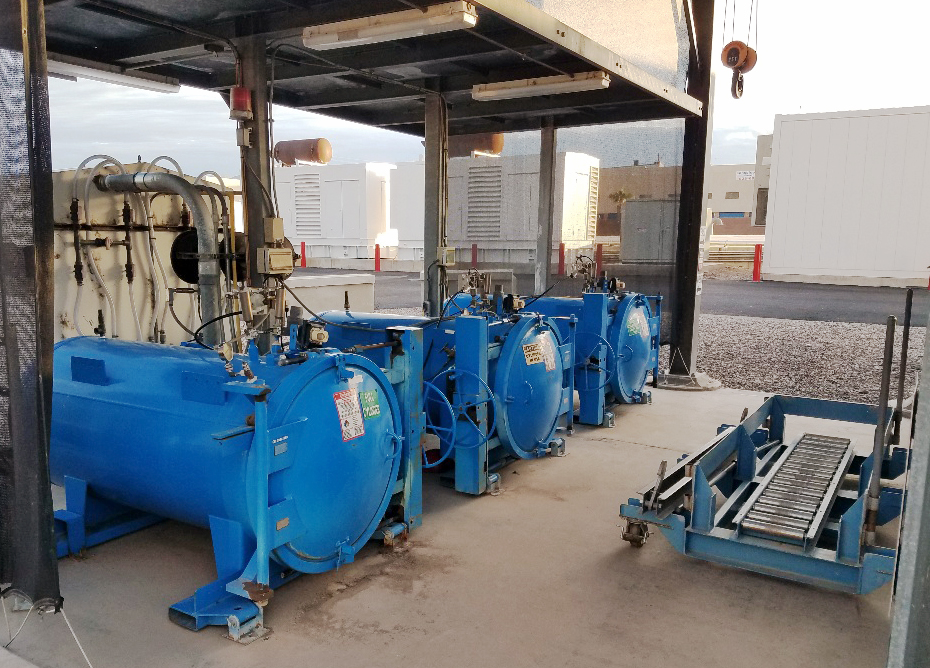 The superintendent of an average 4 MGD activated sludge wastewater treatment plant (WWTP) reports that his preference for using chlorine gas as his most cost-effective option for primary disinfection has been further supported by enhanced management of gas leak risk.

“We are operating 24/7 within 200-300 yds. of residences, as well as a youth baseball complex,” noted Wayne Lee, Supt. of the City of Slidell, LA’s WWTP, “and we also have high regard for the safety of our employees. We haven’t had any serious gas leak issues since the plant opened in 1984, and we have a trained hazmat team on call for emergencies, but we were pleased to be able to enhance that response insurance with cost-effective, on-site physical containment readiness.”

“That leaves us much better prepared for any off-hours event when there would be only one plant operator, and it would take longer to assemble the hazmat team.”

The incoming wastewater stream for the design 6 MGD plant passes from the headworks into a grit chamber, followed by two primary clarifiers, and then aeration tanks, before final clarifiers that are linked to an anaerobic digestion loop. The clear water leaving the final clarifiers goes to the chlorine contact chamber.

Chlorine is pumped to injectors at the rate of 125 lbs./ day, with injection performed at the final clarifiers “to give it more time to work, and also use less that way,” said Lee. He added that gas was his preferred option for chlorine addition, with the plant too big for tablets or powder, and bleach likely costing twice as much.

Two 1-ton cylinders of chlorine are stored in a covered building. Sulfur dioxide, used at the end of the plant process for dechlorination, is stored inside an enclosed building.

“That vessel containment was much preferred to a scrubber-type solution, which would require major building modifications,” Lee noted. “A scrubber system would also have required a special six-member, trained response team to be available to deal with a leak within the building.”

“With the vessels, it is all done automatically, with minimal personal exposure. And with two tanks for each gas, we don’t have to suffer any plant process interruption if there is leak containment going on in one of them.”

Lee said the procedures for leak management were not difficult, with the container manufacturer very helpful with training.

“We got used to it during some minor episodes that occurred during cylinder deliveries,” he recalled. “They had been placed in the containment, so we just bypassed to the other cylinder while the gas leak was vacuumed out.”  The containment vessels were positioned on a concrete pad and bolted down. With any accidental leaks of chlorine kept within the containment vessel, no atmospheric venting is generated. The vessels are ASME-rated pressure tanks, and any leaks are recycled to the injection system at a normal flow rate. A failsafe valve ties into the chlorine sensor, so that in the event of an external release, the failsafe valve will close and since it is under vacuum.

There can be a question of the integrity of the system from the outlet line where chlorine gas penetrates the wall of the pressure vessel, to the location where the vacuum line leaves the outlet side of the pressure regulator. A study has shown this could release less than 0.0009 lbs. of chlorine gas. Should there be a gas leak inside a ChlorTainer™ vessel, there is no waste, as the gas is processed at a normal rate until everything is used.

*Catalytic Objective SynthesisTM newsletters, reported independently by Cliff Lebowitz, are sponsored by equipment manufacturers, who allow for objective reporting based on interviews of their customers, who in turn provide review and approval for accuracy and completeness. Titles and headlines are created to help readers recognize solutions for problems and needs, typically related to issues such as quality, reliability, efficiency, and compliance. Circulation and distribution are customized for each newsletter.