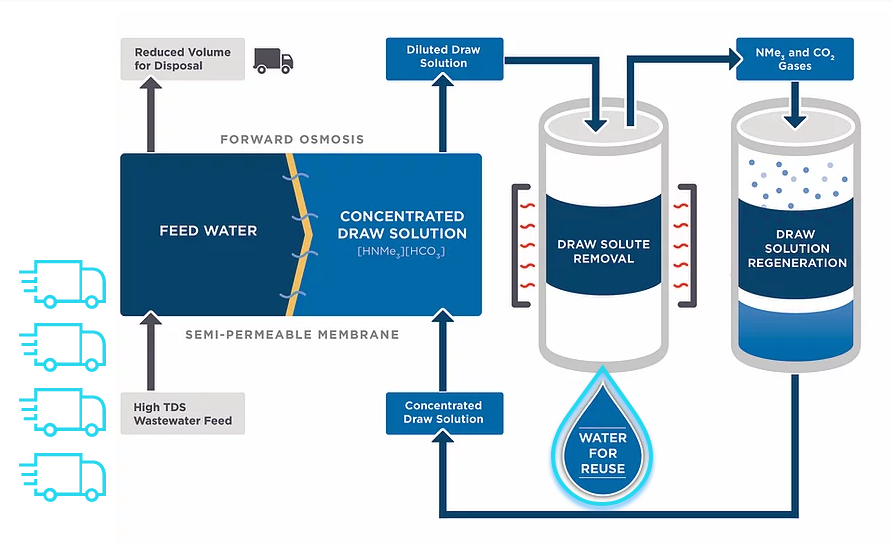 A small Canadian company working out of the Western Sarnia-Lambton Research Park is taking on one of this century’s greatest challenges —abundant access to clean water for people, farms and industry.

The technology was born at an Ontario university lab and has now reached the demonstration stage in a pilot plant at the Sarnia facility.

2.Draw solute removal through application of mild heating which causes our draw solute to switch from its salt form to yield two volatile commodities including CO2. This step, which can even utilize abundant industrial waste heat, leaves behind fresh water product for reuse in operations.

Forward Water’s three-step process could potentially provide industry with an alternative to expensive and harmful wastewater disposal methods. And in a world that lacks the vast water resources of Canada, the potential is even greater, the company says.

The forward osmosis process was discovered a decade ago by Queen’s University research professor Philip Jessop, working with GreenCentre Canada. He was able to show how dirty water can be drawn through a membrane to leave the contaminants behind. The low energy – and thus low cost – process is chemistry-induced, rather than requiring physical pressure.

Forward Water, which has its corporate offices in Mississauga, became a separate company to advance the engineering process, which is underway in Sarnia.

The Research Park also provides the base from which to show the pilot plant to potential industrial customers looking for solutions to a big environmental problem.

In October, Forward Water announced it had signed a partnership agreement with an Indian company, Goldfinch Engineering Systems, granting intellectual property rights to commercialize the technology at a new pilot plant in India.