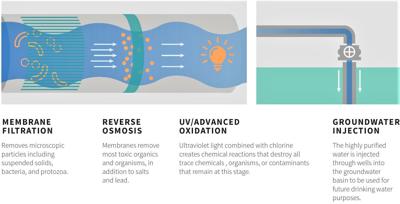 The filtration steps for re-injecting water into aquifers are demonstrated in a Sanitary District graphic.

The Carpinteria Advanced Purification Project, or CAPP for short, is progressing on schedule. This amazing project is a partnership of the Carpinteria Valley Water District and the Carpinteria Sanitary District, with support and cooperation from the City of Carpinteria. The preliminary project design is now complete, and this summer the project team will release a Draft Environmental Impact Report and seek input from the public. That means you! A public meeting will be held on July 28 to give you an opportunity to provide input and comments on the report.

The CAPP takes highly treated wastewater that would otherwise be discharged into the Pacific Ocean and purifies it using a three-step, advanced treatment process consisting of microfiltration, reverse osmosis and ultraviolet light enhanced oxidation. The process, known as Advanced Water Treatment, or AWT, produces a super high-quality water that meets or exceeds all state and federal drinking water standards. The purified water would then be pumped into deep aquifers to augment existing groundwater supplies.

As cool and cutting edge as this all sounds, this technology is considered the industry standard. AWT is a fully proven process that is approved by the State of California Division of Drinking Water. In fact, the State officials who regulate these types of projects work in an office right here in Carpinteria. The CAPP would fully comply with State guidelines including implementation of a comprehensive testing and monitoring program to ensure continuous and complete protection of public health.

AWT is not a new concept. The Orange County Water District was the purification pioneer in California and they have operated an AWT groundwater augmentation project since the late 1970’s. Their Groundwater Replenishment System has now expanded to produce almost 100,000 acre feet per year (AFY) of purified water. Statewide, AWT projects are becoming a major part of our municipal water supply. Earlier this year, the City of Los Angeles announced a bold plan to recycle 100 percent of the wastewater currently flowing to the ocean from its massive Hyperion Wastewater Treatment Plant.

From San Diego in the south to Santa Clara in the north, currently planned or permitted groundwater augmentation projects will provide nearly 600,000 AFY of purified water to California. The CAPP, designed to recycle almost 100 percent of the treated effluent from our facility, will only produce around 1,100 AFY. But this represents about 25 percent of the total water supplied by the Carpinteria Valley Water District each year. Not too shabby.