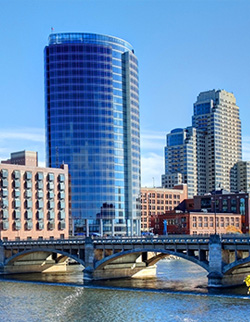 CITY OF GRAND RAPIDS – MICHIGAN, USA
In order to avoid the cost associated with large valve replacement, the city of Grand Rapids engaged Xylem to assess the true condition of 20 large valves and determine if they could be rehabilitated or repaired instead. 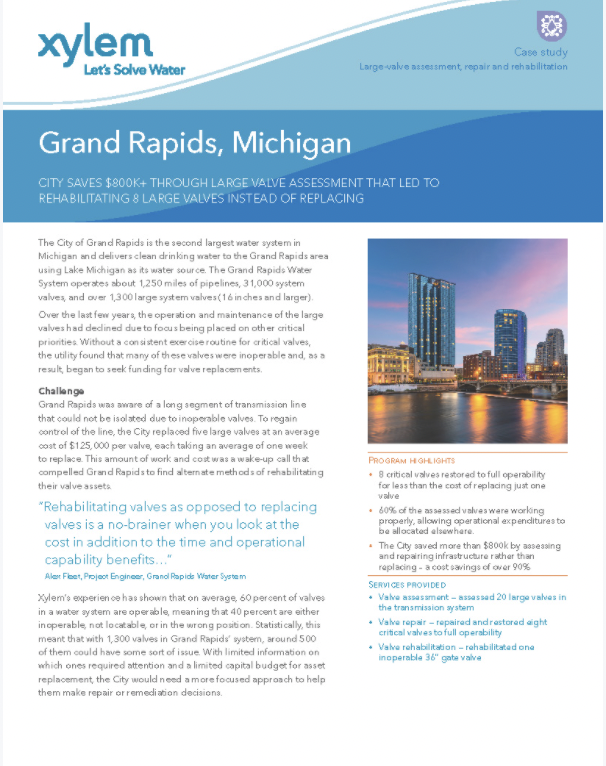 The City of Grand Rapids is the second largest water system in Michigan and delivers clean drinking water to the Grand Rapids area using Lake Michigan as its water source. The Grand Rapids Water System operates about 1,250 miles of pipelines, 31,000 system valves, and over 1,300 large system valves (16 inches and larger). Over the last few years, the operation and maintenance of the large valves had declined due to focus being placed on other critical priorities. Without a consistent exercise routine for critical valves, the utility found that many of these valves were inoperable and, as a result, began to seek funding for valve replacements.

THE CHALLENGE
Grand Rapids was aware of a long segment of transmission line that could not be isolated due to inoperable valves. To regain control of the line, the City replaced five large valves at an average cost of $125,000 per valve, each taking an average of one week to replace. This amount of work and cost was a wake-up call that compelled Grand Rapids to find alternate methods of rehabilitating their valve assets.

Xylem’s experience has shown that on average, 60 percent of valves in a water system are operable, meaning that 40 percent are either inoperable, not locatable, or in the wrong position. Statistically, this meant that with 1,300 valves in Grand Rapids’ system, around 500 of them could have some sort of issue. With limited information on which ones required attention and a limited capital budget for asset replacement, the City would need a more focused approach help them make repair or remediation decisions.

What solutions did Xylem and Grand Rapids come up with to solve this challenge? Find out and explore the results we achieved together by downloading the full case study below.