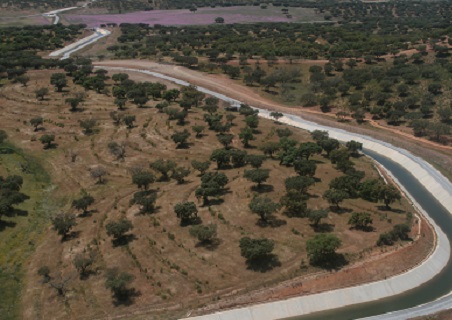 This year the United Nations (UN) has decided to link the World Water Day to the climate change challenge. Global warming puts a lot of pressure on water cycle and, in some cases, threatens the people’s access to this precious resource and sanitation services.

Today, 1 in 3 people, around 2.2 billion, live without safe drinking water (WHO/UNICEF 2019). Climate-resilient water supply and sanitation could save the lives of more than 360,000 infants every year (UN 2018).

Extreme rains or strong winds may affect the energy and telecommunication networks which make the water transportation system work. Outages can shut down the system's essential components, the pumping stations and the treatment plants.

Another extreme weather event is drought , which lowers the level of the ground and underground waters that feed the distribution system. “Some rivers are our source of drinking water, as well as the aquifers [layers of rock, sand, or earth that contain or allow water to pass through them, ed. note ]. Drought poses problems for these water capture fields as well,” says professor Alexandru Dimache, dean of the Faculty of Hydrotechnics at the Technical University of Civil Engineering in Bucharest, Romania.

The lack of rain may also generate problems for the sanitation system: “Sewage networks transport both waste water and rainwater. When it doesn't rain, waste water flows slowly and deposits build up, leading to fermentation,” explains Dimache.

Fears about supplying drinking water on a permanent basis

“Climatologists predict that extreme phenomena will occur more often, and this will impact the entire networked infrastructure, be it water, energy or telecommunications. This is why we have to adapt and try to design more resilient and safer networks ,” asserts Eddy Renaud, engineer at the French National Institute for Agriculture, Food, and Environment (INRAE), Department of Water, located in Nouvelle-Aquitaine, Bordeaux.

He stresses that drought is likely to be more complicated to manage in the future due to climate change. This would be especially true when there are conflicts of use between drinking water, irrigation, industry or preservation of the aquatic environments.

Water pipes generally have a certain lifetime. Renaud explains that leaks occur mainly because of aging, mechanical stress on the networks, and overpressure ; nevertheless when a leak is detected, a very large quantity of water has already been lost.

According to a report by the European Federation of National Water Services (EurEau), the mean value for losses in drinking water distribution is 23% .In a broader context of water scarcity, which already affects some parts of the world, saving this resource becomes crucial.

Water saving: a new method to detect leaks in pipes

A European project called WADI is developing a technology to detect water leaks early, based on data obtained from drones and aircraft using remote sensing cameras. This solution is particularly helpful in monitoring long water pipes in remote rural areas , where they are buried and very difficult to check with traditional ground methods.

”This type of technology provides better data than satellites and it can save a lot of water and energy,” says Anabela de Oliveira, coordinator of the Information Technology in Water and Environmental research group at the National Laboratory for Civil Engineering (LNEC) in Lisbon, Portugal, which is partner of the project.

Two demonstrations sites, one in France managed by the Société du Canal de Provence, and the other in the Alqueva Reservoir in Portugal operated by the public company EDIA, have been monitored so far. Researchers are currently analysing the data recovered from airborne detection and they are factoring in parameters such as dry or wet weather, and bare or vegetated soil.

In addition they are also allowing for other factors that may influence accuracy of the infrared sensing cameras : materials used for piping, the presence of the irrigation works on the ground and so on. The final project results will be unveiled this summer.