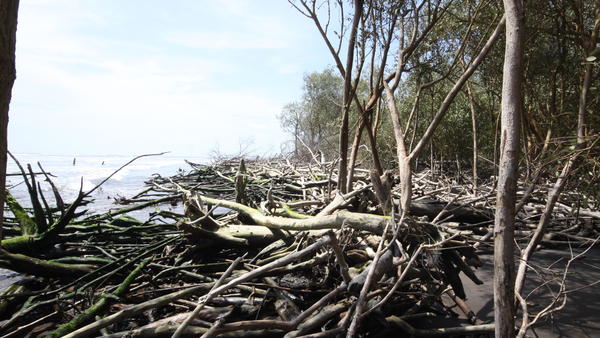 Researchers at UC Riverside and Scripps Institution of Oceanography at UC San Diego have found that inland river dams can have highly destructive effects on the stability and productivity of coastline and estuarine habitats.

Accumulation of dead trees at the mouth of the Santiago River which was dammed about 20 years ago. (Image by Ezcurra lab/UC Riverside)

The researchers analyzed downstream ecosystems from four rivers, two dammed and two unobstructed, in the Mexican states of Sinaloa and Nayarit, which sit on the Pacific coast. They found dramatic coastal recession along the mouths of the obstructed rivers, including in vital ecosystems like mangrove forests, which provide protection from storms, commercial fishery habitats, and belowground carbon storage.

The rivers studied run roughly parallel to each other through similarly developed land, into large coastal lagoon systems. The Santiago and Fuerte rivers have dams that provide hydroelectric power for the region but withhold 95 percent of the flow of these rivers. Meanwhile, the San Pedro and Acaponeta rivers are relatively free-flowing and undammed, with over 75 percent of the rivers remaining unobstructed.

Over 1 million tons of sediment is trapped in the dams along the Fuerte and Santiago rivers each year, resulting in striking coastal recession at the rivers’ mouths. This sediment would normally make its way to the river mouths, where it would accumulate along the coast and allow ecosystems like mangroves to grow. Since damming, the Santiago and Fuerte rivers showed an annual loss of coastal lands of up to 21 hectares — about 40 American football fields. In contrast, the coasts around the estuaries of the San Pedro and Acaponeta rivers did not recede, but rather were stable or even showed sediment growth over the same time periods.

“Similar processes of damming rivers and controlling water flows are destroying estuaries and coasts in many parts of the world, such as the Mississippi and Nile deltas,” said Exequiel Ezcurra, the paper’s lead author and a professor of botany and plant sciences at UC Riverside. “Despite the huge implications for ecosystem conservation, the process of coastal degradation as a result of large dams has not been well-studied or quantified using a strict comparative approach.”

The coastal recession has widespread economic impacts on the region, including loss of fisheries habitats, reduced coastal protection from storm events, decreased biodiversity, loss of estuarine livelihoods, as well as the increased release of carbon previously stored in coastal sediments. The researchers tallied the economic consequences of these losses at well over $10 million annually, with $1.3 million of that coming from the region’s natural capital in fisheries services alone.

“The benefits of ephemeral jobs generated around the construction of the dam need to be weighed against the long-term costs the dam will cause to local livelihoods,” said Octavio Aburto-Oropeza, the paper’s co-author and a professor at Scripps.

Additionally, botanists Sula Vanderplank from San Diego State University and Lorena Villanueva of UC Riverside, both co-authors of the paper, found that this instability directly impacts the floral biodiversity of the coasts. The estuarine sandbars of the undammed San Pedro and Acaponeta rivers had significantly greater levels of species richness than the Fuerte and Santiago rivers, and many of the species — rare native palms, rare orchids, and Bromelia — disappearing from dammed estuaries are found nowhere else and have high conservation value.

Hydroelectric dams are championed as sources of renewable energy and low-emission alternatives to fossil fuels. However, the hydroelectric project can cause damages on the coast and lower part of tropical basins, including loss of mangrove services and estuarine productivity. These losses, which are rarely calculated, can add a significant amount to the environmental costs of a dam.

“This study sheds light on the need to take into account the environmental and economic impacts of hydroelectric dams on ecosystems along coasts and basins,” said Aburto-Oropeza. “We need to fully account for the effects that damming upriver has on the entire region.”

This research was funded by the David and Lucile Packard Foundation, UC MEXUS, and the Leona M. and Harry B. Helmsley Charitable Trust.