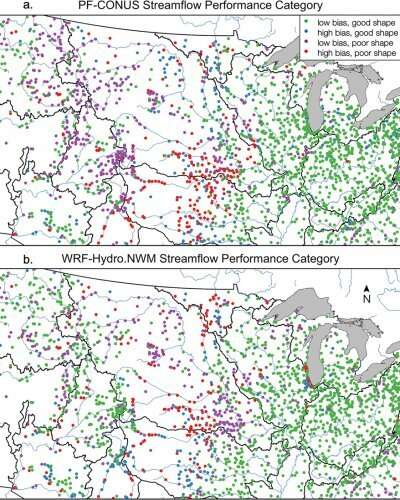 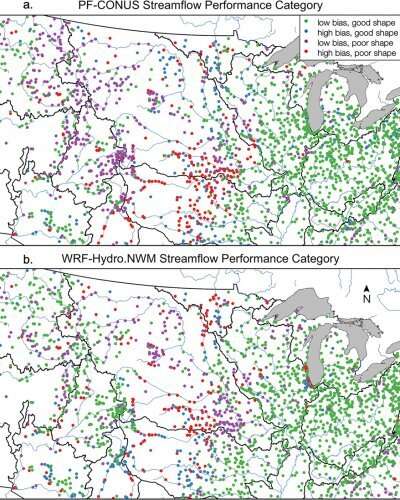 The researchers examined the components and processes within two enormous models known as ParFlow-CLM (top) and WRF-Hydro (bottom), which capture hydrological processes for the entire United States. It took a year of running supercomputer simulations and analyzing large data sets to resolve the biases and discrepancies between the two models, as well as compare them to almost 3,000 streamflow observations. Credit: Danielle Tijerina, Department of Civil and Environmental Engineering

While Earth's freshwater resources are finite, the challenge of effectively and sustainably managing them as we head into a warmer future with a growing human population means keeping tabs on a seemingly endless network of above- and below-ground waterways.

For the United States, two enormous models have been developed that capture hydrological processes—from forecasting floods to predicting groundwater levels—for the entire continent. Now, a project led by Princeton University researchers has undertaken the Herculean task of checking those two models against each other to ensure that scientists and policymakers are working from consistent, accurate data when it comes to managing the nation's water budget.

Researchers from Princeton, the National Center for Atmospheric Research (NCAR), the University of Arizona (UA), and NASA published the results of the first phase of the Continental Hydrologic Intercomparison Project (CHIP). The team spent a year running supercomputer simulations and analyzing large data sets as they compared the two continental models—known as WRF-Hydro and ParFlow-CLM—to each other and to almost 3,000 streamflow observations, according to a report in the journal  Water Resources Research .

The researchers sought to examine the components and processes within each model as well as resolve any biases and discrepancies between them. The project stands as the first model-to-model comparison of this scale and provides an important proof-of-concept for rigorously comparing very large-scale hydrologic models, the researchers reported.

The results of the study not only increase scientists' knowledge of how to model hydrologic processes, but also of how to improve future forecasts, said first corresponding author Danielle Tijerina, a doctoral student in civil and environmental engineering at Princeton.

"Because all models have inherent biases, one of our main goals was to use model streamflow performance to isolate specific biases, which then gives model developers a platform to begin improving certain aspects of these models," Tijerina said. "We want to emphasize that this was a huge collaborative effort between different modeling groups, which is essential for the development and improvement of these community models."

By examining and resolving the discrepancies between each model, the researchers also have helped build scientific and public trust in the transparency and accuracy of hydrologic modeling, said co-corresponding author Reed Maxwell, Princeton professor of civil and environmental engineering and the High Meadows Environmental Institute (HMEI).

This trust is critical as scientists, policymakers and the community work together to conserve and protect the nation's water resources, he said. Maxwell is co-principal investigator of HydroGEN, a project funded with a $1 million Convergence Accelerator grant from the National Science Foundation (NSF) that will use artificial intelligence to simulate the nation's natural groundwater system in an effort to improve water management and help people better prepare for flooding and drought.

"The scale and depth of this project helps build the community confidence—and provide the insight into watershed modeling—needed to forge broad collaborations that will improve the hydrologic modeling of watersheds across the United States," said Maxwell, who is director of the Integrated GroundWater Modeling Center based in HMEI.