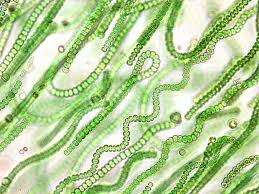 There is a link between ALS and cyanobacteria present in algae blooms. A study of possible environmental links to the disease, also called amyotrophic lateral sclerosis or Lou Gehrig's disease uses satellite technology and onsite water testing.

The link between ALS and cyanobacteria present in algae blooms was first traced to Guam in the 1950s, says Dr. Elijah Stommel, a professor of neurology at Dartmouth's Geisel School of Medicine.

"Those microorganisms that form these blue-green algae blooms in the water in the warmer months of the year can be tracked with remote sensing satellite imagery," said Stommel, who also works at the ALS clinic at Dartmouth-Hitchcock Medical Center.

The clinic started mapping ALS patients several years ago, finding some clustering around bodies of water, including Lake Mascoma in Lebanon.

"We didn't know why there would be a cluster of ALS there," said Stommel, who specializes in neuromuscular disease. "We were asking lake biologists and people who knew more about the body of water in particular. It turned out that it had had frequent algae blooms and the same cyanobacteria that were found in Guam."

They also found the cyanobacteria in carp that had been introduced to the lake and in aerosol, the air around the lake.

"We've given questionnaires to 700 ALS patients now in northern New England and some other parts of the country," Stommel said. "It appears not everybody lives on a water body like Lake Mascoma or is eating fish out of the lake or is swimming in the lake or recreating in the lake. But they are living in close proximity. We think aerosol might be an exposure route. People are breathing it into their sinus and into their lungs."

Recreational activities may be putting those people at risk through the aerosol exposure, said Stommel, who said the research he has been working on with several other medical researchers has yet to be published.

"There's still a lot to be learned. There are clusters in other areas of northern New England, including part of the east coast of Lake Champlain, near the Shelburne, the Milton area, St. Albans area. We've seen clustering in Bangor, Maine. That data is a little bit shaky because we don't have access to all the patients in Maine."

Stommel notes that people who suffer from ALS may be genetically susceptible.