Dangerous Waters in a Changing World 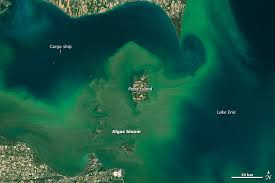 Dangerous Waters In A Changing World

Americans and Canadians got a peek into the future when the City of Toledo shut its drinking water taps in 2014, issuing a do-not-drink order on the municipal water supplies serving 500,000 people. Levels of microcystin, a potent liver toxin produced by blue-green algae, were more than double the World Health Organization's safe limit. More than 700 square miles of the Lake Erie surface was covered by a harmful algal bloom (HAB), and drinking water plants couldn't remove the algal cells and the toxins they produced. 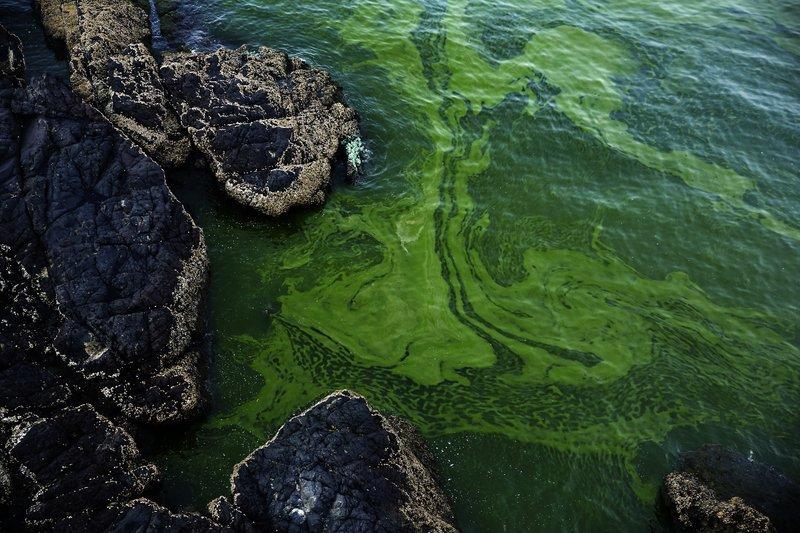 That's awful. What's worse is that Toledo's experience is likely to become more common worldwide in the years to come. From the current red tides along the southwest Florida coast to massive blooms that have become common from the Baltic to the Persian Gulf and the South China Sea, HABs occur frequently.

That puts immense pressure on drinking water suppliers to gear up to handle HABs and the compounds they discharge. As Dr. Saad Jasim, manager of utilities for the City of White Rock, British Columbia, and president of the International Ozone Association says, "the drinking water plant is our last line of defense."

There are more than 2,000 species of algae, of which about 40 species produce toxic compounds. An algal bloom, toxic or not, can cause fouling in water transport and filtration systems, produce off-flavors and unpleasant odors, block sunlight from reaching aquatic ecosystems, and deplete oxygen as dead cells decompose. It also interferes with swimming, fishing and scenic value, threatening local economies.

HABs take algal problems to a whole new level. In fresh water, the most common harmful algae are cyanobacteria, or blue-green algae. The various species of cyanobacteria can produce a range of potent cyanotoxins, including poisons that attack the liver (hepatoxins, like the microcystin that shut down Toledo's water supply), nervous system (neurotoxins) and skin and eyes (dermatoxins). The U.S. EPA reports that there are more than 80 known variants of microcystin alone.

Cyanobacteria also produce taste and odor (T&O) compounds, including geosmin and 2-MIB. Though they are not toxic, those terpenoids are alarming: 2-MIB is detectable at the minute concentration of just 5 nanograms per liter.

It is little surprise that Lake Erie experienced the epic HAB of 2014. According to Dr. Jasim, who directed the International Joint Commission's Great Lakes Regional Office from 2010 to 2013, the lake is surrounded by 1,448 municipal wastewater treatment plants releasing 4.8 billion gallons per day, over 1 million private septic systems, and thousands of farms contributing nutrient runoff to the lake. Add to that sewage bypass events, combined sewer overflows (CSOs) during storms and industrial discharges and there is a nearly endless supply of nutrients to feed algae. Then sunny summer weather sparks the bloom. 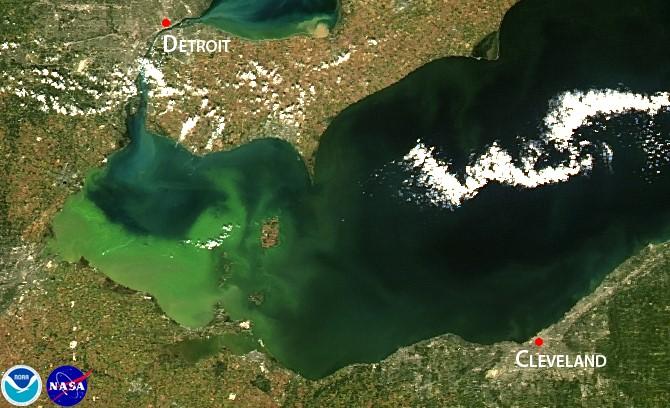 This NASA image shows the huge harmful algal bloom (HAB) in Lake Erie that forced Toledo to close its drinking water plant in 2014. Such blooms are familiar in many waterbodies around the world, and changes in climate threaten to make them more common in the future. [Photo by NASA]

Lake Erie's 2014 bloom made headlines, but the presence of an HAB was itself hardly unique. In fact, microcystin is common in American waterways. EPA's 2016 National Lakes Assessment — part of its National Aquatic Resource Surveys (NARS) program — found microcystins in 32 percent of the 1,161 inland lake and reservoir samples collected around the country. In fact, microcystins were found in every contiguous state.

That's sobering. The future is even more frightening.

As current warming trends continue, air and water temperatures will become even more favorable for algae. Lakes and streams will enjoy less ice cover, and thermal stratification patterns will change, according to Dr. Jasim. Carbon dioxide levels will rise — which also favors algae — and efforts to feed a growing population will result in more fertilizers on farms and manure from concentrated animal feeding operations (CAFOs). Storms will become more frequent and more intense, increasing runoff from farms and cities. It's a recipe for more HABs.

Algae are especially difficult to deal with for several reasons. By nature, algal cells are sticky, plugging up pipes, strainers, and filters. Physical damage further complicates the problem of control, as lysing (or breaking) the cells can release toxins and T&O compounds.

Dissolved air flotation (DAF) can gently lift many species of algae to the water's surface to be skimmed off with minimal lysing of the cells. However, some algae neither float nor sink, and DAF systems can be large and costly. Coagulation and flocculation is relatively ineffective on algae and increases the risk of lysis.  Algae and the toxins from lysed cells carbon systems can be adsorbed onto activated carbon, but the systems require impractical amounts of carbon, which is cost-intensive in terms of purchase, storage space, labor, and disposal — a different sort of large carbon footprint. Activated carbon can also be hazardous to handle, as wet C strips oxygen from confined spaces and dry powder presents an explosion risk.

Chemical oxidation with agents like chlorine can be effective for some, but not all, cyanotoxins and are strongly influenced by pH and dose. Even reverse osmosis (RO) filtration fine enough to desalinate water lets a significant amount of cyanotoxin through.

Fortunately, ozone is highly effective at oxidizing all species of cyanotoxins. Dr. Jasim notes that pH and dissolved organic carbon (DOC) levels can influence ozone's efficacy, and optimum levels can vary from one target compound to another. As a result, experimentation on dose, pH, and temperature is necessary when several compounds occur together.

Optimizing ozone dose is also important to minimizing the production of bromate in the presence of high levels of bromide, or creating permanganate from manganese, he adds.

"You don't want to solve one problem and create another," Dr. Jasim notes. "You refine the approach. You optimize the application."

Today's drinking water plants — and certainly tomorrow's — should be designed with HABs in mind. An ozone system with Mazzei injectors has been installed in Oregon, OH to help with HABs, and another is currently under construction along Lake Erie.

At the City of White Rock's water treatment plant, Dr. Jasim's team uses ozone to oxidize arsenic III to arsenic V to maximize removal downstream, carefully balancing the ozone rate to minimize the conversion of native manganese to permanganate. He says his plant's system, which uses a Mazzei venturi injector to introduce ozone into a sidestream and a pipeline flash reactor (PFR) to mix the ozonated sidestream with the main flow, is highly efficient, particularly when compared with a bubble diffuser used in pilot tests during the system's design phase. 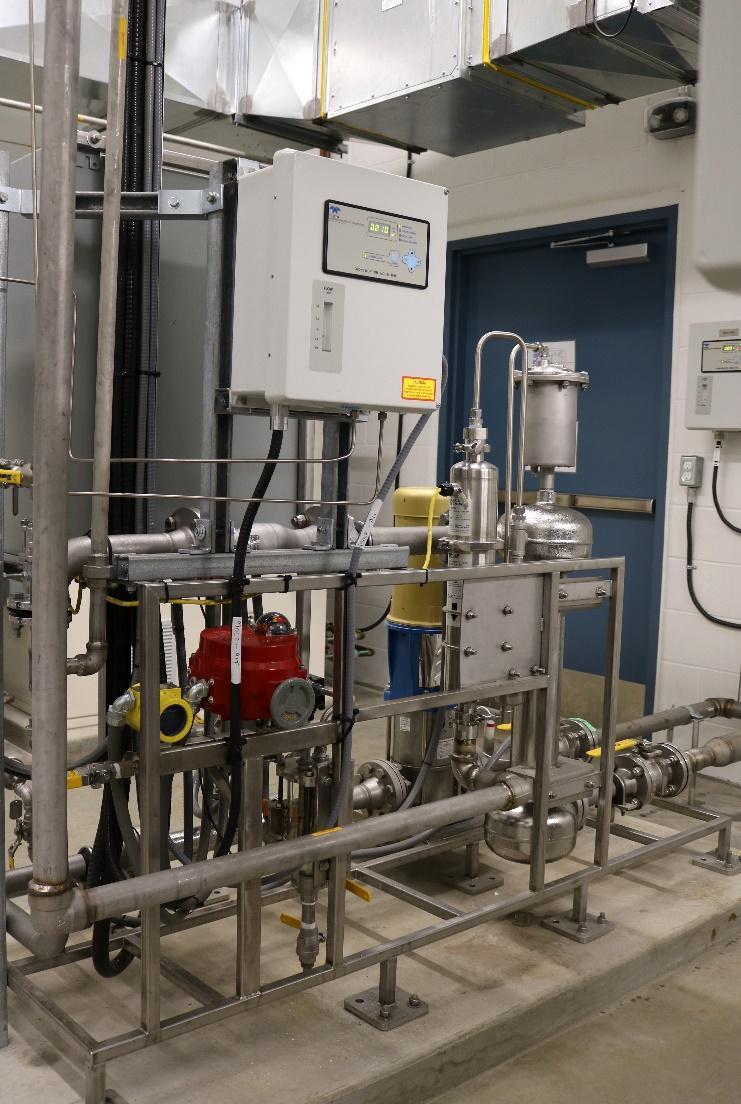 This skid-mounted ozone transfer system features a venturi injector and a Mazzei degas separator, creating a highly efficient injection and mixing system in a compact space at the City of White Rock, BC drinking water plant. 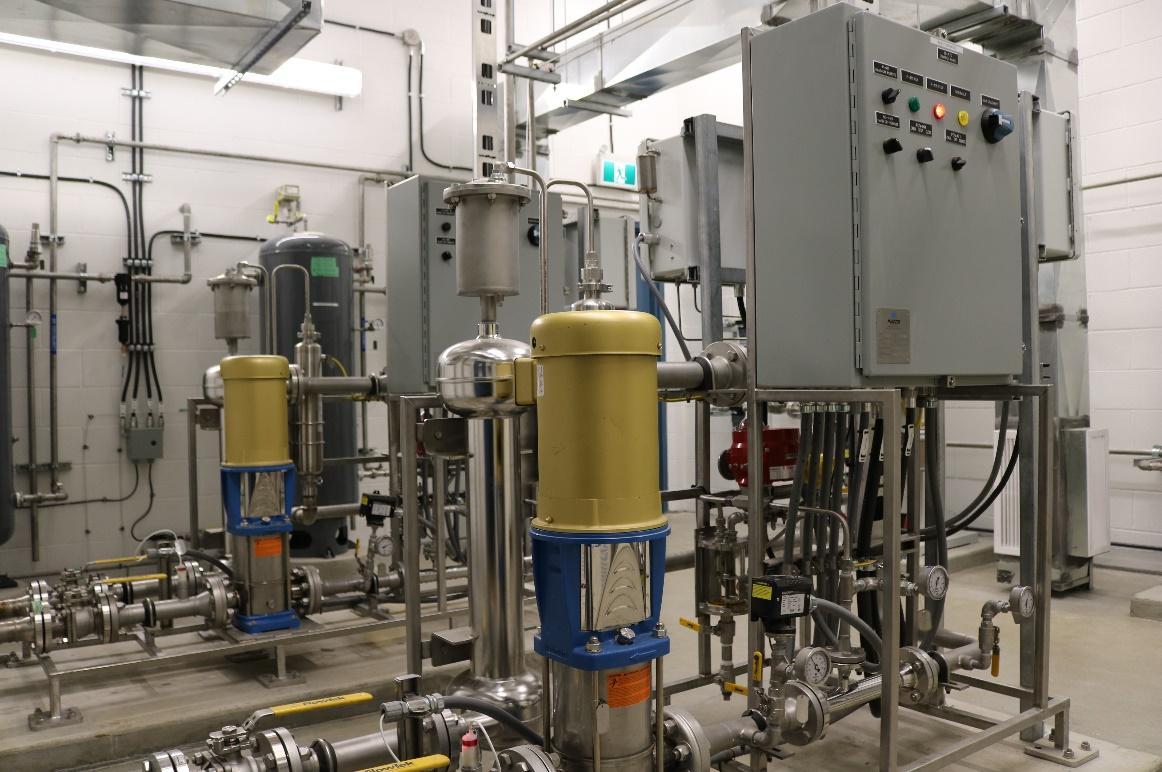 White Rock's plant is severely limited by space — residents were adamantly against cutting into the adjacent forest to expand the facility's footprint, making contact basins impractical. Instead, the design uses a curving 35-meter (115-foot) pipe hung from the ceiling as a contact vessel between the PFR and the filter. On a slow day — 7 to 8 million liters per day (1.8 MGD) — contact time is about 2 minutes. When the plant is running at its full 15 million liters per day (3.96 MGD) rated capacity, contact time is 1 minute, the required period to allow oxidation. 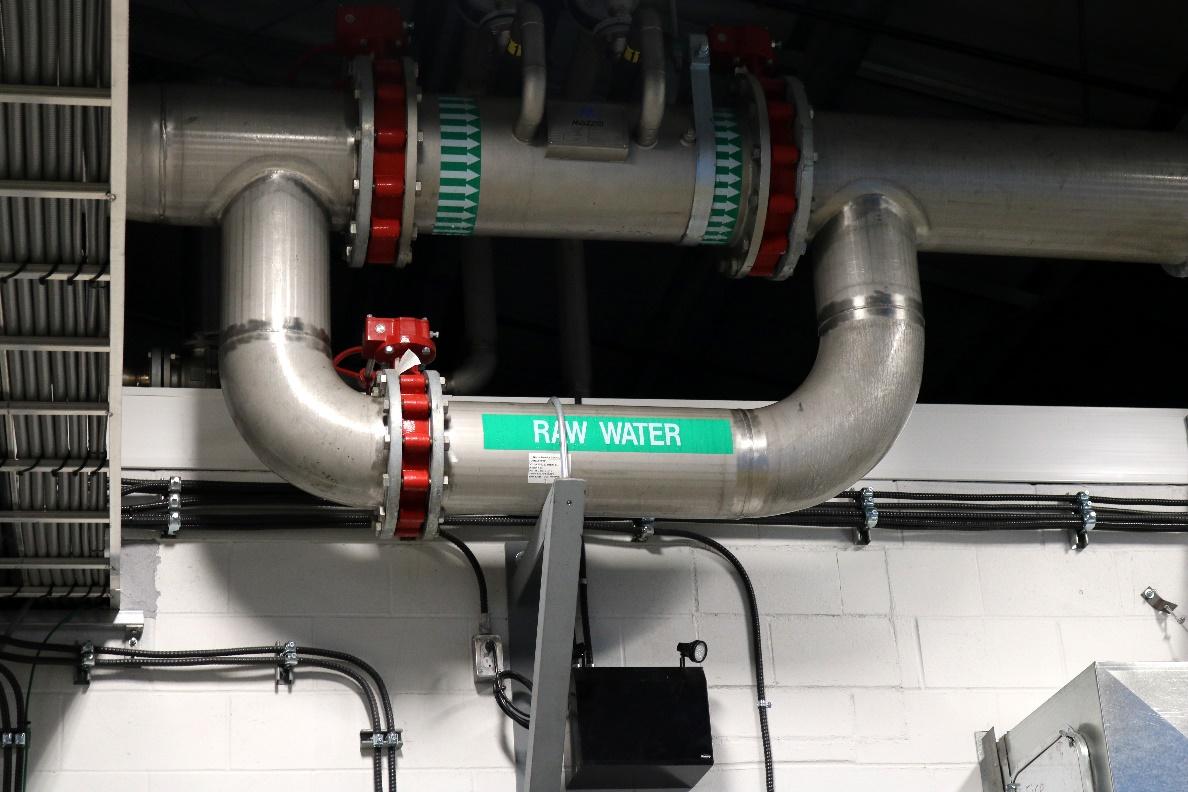 An ozonated sidestream is reinjected into the main flow of the City of White Rock, BC drinking water plant through a pipeline flash reactor (PFR), seen at top. Mounting the PFR and a 35-meter (115-foot) pipe used as an inline contact vessel saved the city money and space.

Dr. Jasim says, based on his research, the same sort of system could work for controlling HABs, cyanotoxins, and T&O compounds. In fact, low dosages of ozone were effective in removing algal toxins in a controlled lab study he recently conducted, and also removed 90 percent of the antibiotics in sewage discharge in another study, he adds, indicating that planning systems to deal with HABs can also provide safeguards against chemicals of emerging concern (CECs).

Concerns will continue to emerge about a wide range of threats to safe drinking water — including the likelihood of more frequent HABs — so insight like Dr. Jasim's will be vital to keep our taps running while the algae blooms.

NOTE: The National Oceanic and Atmospheric Administration (NOAA) maintains a very informative website on HABs, including regional forecasts, at https://oceanservice.noaa.gov/hazards/hab/ .

Jim Lauria is vice president of sales and marketing for Mazzei Injector Company, a fluid design company that manufactures mixing and contacting systems. He is a leader in the water treatment field with a proven track record of revenue growth, profit improvement, and new business development.