Drones for Trash Clean Up in Waterways Could Save the Oceans 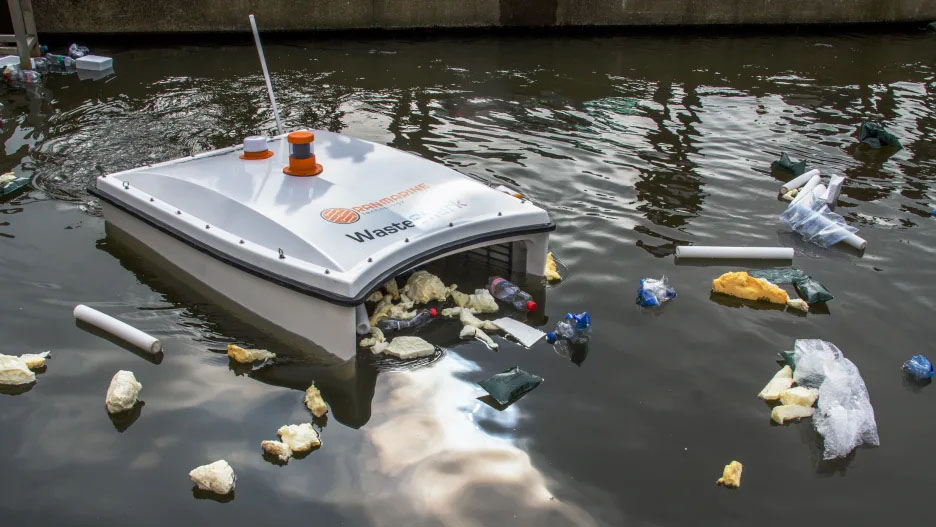 A project using drones for trash clean up in Denmark could show the way to saving the oceans from an environmental disaster caused by the massive volume of plastic that pollutes them.  ( Part two of a two-part series on the use of drone-captured images and machine-learning software in the cause of cleaning up the environment.  See Part 1 here.)

Project combines use of flying, floating drones for trash ID and collection, to clean up Danish waterways

Denmark has launched a unique experimental project, combining both unmanned aerial vehicles and unmanned watercraft to combat oil slicks and floating trash in the nation’s waters.

The CityShark program, designed to coordinate the use of the two different types of drones, began in July 2019, with the use by the Danish coastal city of Aarhus of WasteShark, an unmanned waste-gobbling sailing vessel, manufactured by Rotterdam-based RanMarine Technology.

In the first phase of the project, the WasteShark, owned by the Port of Aarhus, autonomously roamed the waters at the mouth of the Aarhus River where the river flows into the harbor, and scooped up solid waste — plastic bottles, single-use cups, plastic bags and other floating debris. The WasteShark is able to collect 500 kilograms (about 1,100 pounds) of debris each day.

Recently the floating drone was paired with a flying drone, a DJI Mavic, owned by the city of Aarhus. The Mavic, along with its powerful software package, is able to enhance the sailing drone’s abilities to clean up the waterways, giving the system the capability of detecting and cleaning up oil spills on the water.

Organizers chose the Mavic, because they wanted to demonstrate that the water clean-up project could be duplicated in other locations using inexpensive, mass-marketed drones, said Martin Skjold Lind Grøntved, a special consultant for an agency of the Danish Climate Ministry, and one of the project’s organizers.

“When not hunting for solid waste, the sailing drone will be paired in a network with a flying drone mounted with a camera,” Grøntved said.

With its onboard camera, using an oil-detecting algorithm developed by Danish Technical University and cloud-based image-sensing software developed by streaming data analytics company Kinetica, the Mavic is able to detect even small amounts of oil or gasoline waste on the water’s surface. The Mavic can then send a signal to the WasteShark, giving it the location that the waterborne drone needs to sail to in order to clean up the spill. “The sailing drone will be equipped with an oil-skimming unit, that enables it to clean up oil spills and the two drones will be coordinating their efforts in real time,” Grøntved said. The communication system between the two drones will be managed using the Testbed for Precision Positioning and Autonomous Systems (TAPAS) platform – a network of 11 reference stations that enhances data from global satellite-based navigation systems such as GPS and the European Space Agency’s Galileo satellite – as well as by Oracle’s Cloud technology and algorithms developed by Kinetica.

“Using an on-site weather station feeding data through the local Open Data platform, the CityShark project – when fully implemented – is expected to become close to fully autonomous and even take ultra-local weather conditions into consideration when calculating the routes to take in order to get to the oil spills,” Grøntved said.

Image data collected by the flying drone will be downloaded and analyzed by Kinetica’s graphics processing units (GPUs), and permanently stored in a central server owned by the city of Aarhus, where it will be subject to all European data protection protocols.

Kinetica’s technology, which allows the images to be processed by GPUs rather than central processing units (CPUs), greatly speeds up the process of analyzing the images, said Nick Alonso, director of global solutions engineering at Kinetica.

“Really, time is of the essence. The ability to simultaneously inject data and analyze it is one of the big uplifts,” of the Kinetica’s software package, he said.

The data transferred from the flying drone to the sailing drone will consist solely of oil spill location points, derived from the analysis of the images captured by the Mavic. This data will be combined with data from other sources, including weather-related data such as wind speed, to help the sailing drone navigate its way to the oil slick.

Although when the clean-up project becomes fully operational, the CityShark vessel will be able to operate autonomously, under Danish law the operation of the vessel still requires a person to observe it from shore with a kill button to ensure safety.

Sponsors for the waterway clean-up demonstration project are the city of Aarhus, the Danish Agency for Data Supply and Efficiency, the Port of Aarhus, RanMarine, Kinetica and Oracle. The total cost of the project, including the cost of the two drones and the software, is expected to be less than $200,000. In the coming months, the project’s developers plan to expand the program, by adding more drones and installing more sensors on the drones to measure additional parameters, such as water quality.

Drones for Trash Clean Up: A Global Solution

Grøntved said that if the local Aarhus project proves successful, organizers hope to expand the drone-assisted maritime cleanup program nationally and eventually globally. “Aarhus is definitely not a city with enormous waste issues,” he said. “The aim is to develop a feasible technology that can be exported to areas that have more severe waste and pollution burdens than Aarhus, and in this way help to clean up the oceans.”

The project is in keeping with the UN’s Sustainable Development Goal 14, concerning preserving marine life in the earth’s waterways, in that it aims to prevent an environmental disaster caused by the massive volume of plastic in the oceans, Grøntved said.

“We hope the project will provide a technical solution that will be possible to run on low-cost equipment so it can be scaled up and used in other areas of the world, mitigating trash in our oceans,” he said.