Effect of carbohydrates on protein hydrolysis in anaerobic digestion 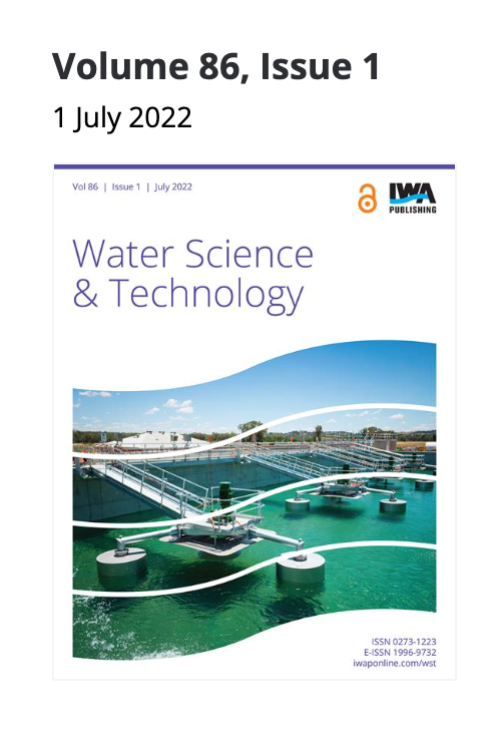 Anaerobic digestion is widely used for the treatment of wastewaters, converting organic pollutants into energy-rich methane. Alternatively, short-chain volatile fatty acids (VFAs) can be produced from these pollutants to serve as platform chemicals, for instance for the production of more valuable compounds such as bioplastics (Kleerebezem et al. 2015; Tamis et al. 2015) or medium-chain fatty acids (Leeuw et al. 2019). Carbohydrates and proteins are the dominant organic pollutants in many food-related wastewaters and wastes, and together account for 60–90% of the chemical oxygen demand (COD) of dairy, beverage, slaughterhouse and food processing wastewaters. Of this COD 75–98% is biodegradable (Sayed et al. 1984; Behling et al. 1997; Palenzuela 1999; Demirel et al. 2005; Hassan & Nelson 2012). This implies that the proteins and carbohydrates have a huge contribution to energy or chemical recovery from such wastewaters. Moreover, fermentation of proteins may generate a rich mix of branched fatty acids, for instance iso-butyrate and iso-valerate. These are attractive substrates for chain elongation towards branched medium-chain fatty acids (Leeuw et al. 2019). A lot of scientific as well as practical data about (separated) anaerobic degradation of proteins and carbohydrates is available. However, knowledge about the interaction between the biodegradation of these biopolymers is scarce and inconsistent, in particular regarding the effect of carbohydrates on protein degradation.

Breure et al. (1986a) operated a chemostat fed with 3.5 g L−1 of gelatine at pH 7 under non-methanogenic conditions. Approximately 95% of the gelatine was hydrolysed and on a carbon basis 89% of the gelatine could be recovered as VFA. When the feed was supplemented with 2 g L−1 of glucose the degree of gelatine hydrolysis was still high, but VFA recovery deteriorated. This was attributed to a retarded fermentation of the hydrolysis products of gelatine. In a similar experiment, but at a much higher glucose concentration of 10 g L−1, Breure et al. (1986b) observed a reduction of gelatine hydrolysis from 96% to 77% and even to lower efficiencies at higher dilution rates. They suggested repression of the synthesis of extracellular proteases by glucose to be responsible for this phenomenon. However, the gelatine solution they used had been sterilised for 30 min at 110 °C. This already could have resulted in (partial) hydrolysis of the gelatine (Karnjanapratum & Benjakul 2015), and a misinterpretation of the results. Yu & Fang (2001) arrived at a similar conclusion when they observed in batch experiments at pH 5.5, also under non-methanogenic conditions, that protein degradation did not start before the carbohydrates in the substrate (prepared from full-cream powder milk) were fully degraded. However, at such a low pH protein hydrolysis is inhibited (Duong et al. 2019), which may better explain their results than suppression by carbohydrates. In contrast to the above, Feng et al. (2009) found that rice carbohydrates improved protease activity in waste activated sludge approximately 10-fold. Also Elbeshbishy & Nakhla (2012), who added starch to bovine serum albumin (BSA), showed that the first-order hydrolysis rate constants of BSA increased by a factor of 1.5. It is noted however that in these last two studies particulate protein and carbohydrates were used and not only enzymatic reactions but also the particle surface available for hydrolysis may have been important (Sanders et al. 2001). As such the effect of carbohydrates on gelatine hydrolysis is unclear and results obtained so far by others warrant further research in the matter.

Under non-methanogenic conditions, VFA concentrations in the culture medium can be very high, in particular if significant amounts of carbohydrates are co-fermented. This raises the question if VFA can inhibit protein hydrolysis and/or subsequent amino acid fermentation. When Breure et al. (1986b) replaced glucose by a VFA mixture of 3 g L−1 the negative impact on gelatine hydrolysis was minimal. However, the effect of thermal sterilization on gelatine hydrolysis mentioned above was not accounted for. Flotats et al. (2006) concluded that concentrations up to 11.2 g VFA-COD L−1 did not affect gelatine hydrolysis at 55 °C. Besides, the experiments of Flotats et al. (2006) were carried out under methanogenic conditions and VFA consumption by the methanogens may have alleviated a negative impact of VFA. Finally, also Veeken et al. (2000) could not find a relationship between VFA concentration (3–10 g L−1 at pH 7) and the hydrolysis of solid biowaste, but more specific details regarding protein hydrolysis and amino acid fermentation unfortunately were not reported. In contrast, González et al. (2005) reported that in a saline medium of 24 g NaCl L−1 and at pH 7 first-order hydrolysis rate constants of dissolved peptone were reduced by 2–4 times at acetate concentrations of 0.25 to 0.75 g L−1. Also in the model of Angelidaki et al. (1999), VFA inhibition of hydrolysis was incorporated by a reduction coefficient of 0.33/(0.33 + VFA), VFA as g acetate L−1. However, experimental data to support this and possible mechanisms were not mentioned. 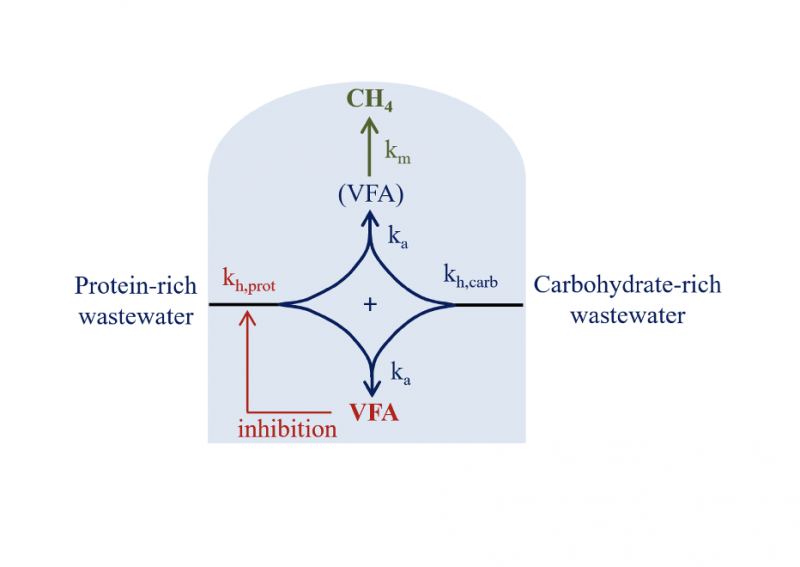 In summary, literature information regarding the effect of carbohydrate on anaerobic protein degradation is scarce and inconsistent and therefore this effect needs to be further investigated. This is important to be able to design anaerobic reactor systems for the treatment of protein-rich wastewaters, either to produce biogas or platform chemicals such as VFAs. For this purpose protein (gelatine) degradation was determined in the presence of carbohydrates (starch) and VFA under methanogenic as well as non-methanogenic conditions at a pH of 6.5–7.5 and under mesophilic conditions (35 °C). The model substrates were chosen because of their high solubility in water and because gelatine and starch are often used as a model protein and carbohydrate in wastewater treatment studies and literature references, as described above. This enables a comparison between our results and results obtained in literature. To be able to distinguish between the different steps in the anaerobic degradation pathway, gelatine and starch degradation were monitored based on concentrations of COD, protein, carbohydrate, amino acids, glucose, VFA and methane.