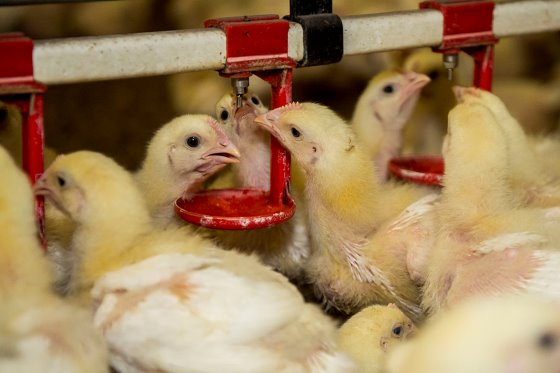 While crucial to healthy flock development, water receives less attention than nutrition and the environment. Yet water – both quantity and quality – is integral to overall flock health.

Much research has been done on water quality, the results of which offer producers new ways to improve quality on the farm. Brian Fairchild, University of Georgia extension poultry scientist, shares his expertise on water quality and management in poultry production, while MID Sweden University post-doc researcher, Sharon Maes, shares the results of her PhD thesis on new tools for research into biofilms.

Water is crucial in poultry production, not just for the birds but also for the poultry houses. In some barns, water is used to reduce air temperature via evaporative cooling and fogging systems. Birds can cool themselves – they do this by panting – but need to consume more water in order to do so. Water is needed for proper growth and development as well.

In broilers, water is critical for metabolism, nutrient transport, body temperature regulation and joint and organ lubrication, as Fairchild explained in a recent interview. Research shows that there is a strong relationship between feed and water consumption, so much so that water consumption can be used as an indicator of flock performance.

Researchers have also monitored flock behaviour to see if water consumption increases when birds are supplied with cool water in times of heat stress. It was found that water temperature does indeed improve the performance of both broilers and layers. Any temperature below the body temperature of the bird is beneficial, says Fairchild. Another factor that impacts water consumption is the farm’s lighting programme. In houses with a lighting programme, peak consumption occurs just after the lights come on and again prior to the lights going out.

In a perfect world, poultry producers would supply their flocks with the same water they drink, says Fairchild, but doing so is expensive and offers no return on investment. Luckily, poultry don’t need human-quality drinking water. Although poultry don’t require sterile water for drinking, heavily contaminated water is not suitable either.

Poor water quality can interfere with digestion and impact overall performance. It can also hinder the effectiveness of vaccines and medications that are delivered via the water lines. More often than not though, poor water quality creates indirect problems. It can clog up water lines and cooling systems. This, in turn, restricts consumption and cooling capacity, both of which can have a detrimental effect on growth and reproduction, says Fairchild.

Chemical products have their limitations as they cannot get into microscopic cracks and little corners because they are just flushed away. Photo: Koos Groenewold

Water quality is determined by its composition beyond hydrogen and oxygen molecules, and that varies from region to region. Treatment should only be done if the results of a water quality analysis warrant it. Fairchild advises farmers to take samples to qualified laboratories. Samples, he says, should be collected regularly. Laboratories will evaluate samples for factors that impact taste, solid build-up and toxicity. Factors include: pH, bacterial load, turbidity, colour, total solids and hardness. They’ll test for iron, manganese, nitrate, alkalinity and toxic compounds.

An impact on broiler health

According to recent studies, very high levels of iron, manganese and nitrates do not impact broiler health. Broiler performance will more likely be affected by equipment malfunctions due to high concentrations than by health issues, says Fairchild. High iron levels can still be problematic, however, he notes. Some bacteria, he adds, use iron as a nutrient source. Thriving bacteria develop biofilms to protect themselves from environmental challenges that are difficult to remove.

Biofilm can spread disease and increase the risk of antimicrobial resistance...

“There is a relationship between water quality and biofilms,” he says. “I wouldn’t say all biofilms are due to poor water quality, but poor water quality could be one thing that could lead to a biofilm build up.” Biofilm is best described as a protective layer that shelters micro-organisms from the elements. Experts believe biofilm gives off an odour that makes drinking water less desirable. They also believe it spreads disease and increases the risk of antimicrobial resistance, as surviving micro-organisms that hide in tiny nooks in pipes pass resistance genes on to the next generation.

There are plenty of products on the market that address this growing issue. One that stands out, is the CD-san Concept by Aumann Hygienetechnik, as it uses no chemicals. It was showcased at EuroTier 2018 where it won an Innovation Award for animal welfare. When coupled with the Harsonic ultrasound system, the CD-san Concept enables thorough disinfection and cleaning when water lines are both empty and full. In the empty phase, the ultrasound system also amplifies the effect of disinfectants, explains Mieke van Genabet-Harteel, CEO of Harsonic.

Getting water right on broiler farms
Getting water lines operating optimally is considered one of the best ways to boost performance. Here, we consider how to get the basics right. Read more...

Chemical products have their limitations, she says. “They cannot get into microscopic cracks and little corners because they are just flushed away,” she adds. “And that is precisely where the resistant bacteria are located.”

The ultrasound device needs to be installed between the drinking lines where a PVC-mounted transducer is attached to a control unit. In situations where livestock live on the ground, such as in poultry barns, 2 transducers are needed to treat 700-750 metres of waterline. Chickens in cages require just 1 unit for every 750 metres.

One of the biggest benefits of using the ultrasound system, says Van Genabet-Harteel, is that the removal of biofilm means that additives and medication going through the water line will not be wasted due to clogging. “The biofilm is a sticky layer where everything collects and is stuck to, and that’s what we take out,” she says.

Another non-chemical solution was presented during the European Layer Training Initiative held in Bern, Switzerland, in 2019. Led by Swiss poultry welfare researcher Dr Michael Toscano, a group of 10 farmers and poultry experts from North America took part in an intensive 2-week study programme to help with the transition from caged to cage-free hen housing. The importance of quality water was emphasised in a talk given by Markus Schwery, international sales manager at Aqua-4D Water Solutions.

The measured mass of chickens in the control group, for example, was larger by 17.6%. As a result of enhanced feed conversion, the amount of water consumed in the trial group was up by 5.28%. At the end of the trial, litter moisture of the trial group was 25.3% lower, and relative humidity in the air of the barn was 8.0% lower. Finally, the trial group showed lower mortality by 2.61%. In terms of bacterial load, Schwery said Aqua-4D eliminates biofilm within 4-6 weeks of installation, and 6 months from installation, the Swiss technology also eliminates lime, manganese and iron deposits.

Research conducted at the Research Institute for Agriculture, Fisheries and Food (ILVO-KUL) in Belgium has revealed that it is possible to suppress undesirable bacteria in biofilms by placing harmless biofilm formers next to them. Sharon Maes conducted the research as part of her doctorate thesis. She successfully developed a chemical-microbial sampling method to check for cleanliness. The chemical side detects the possible matrix components, while the microbial analysis shows which species or bacteria are present in the biofilm.

In the broiler drinking water systems indications of the presence of biofilms were found in 63% of the sampled surfaces.

The composition of biofilms often specific to a farm

During the course of her research, Maes discovered there are a number of common biofilm formers but that the composition of biofilms is often specific to a company or farm. She also tested to see if pathogens could be combatted using harmless biofilm formers. Her hypothesis was tested in the drinking systems of broiler farms and in food companies.

In the broiler drinking water systems indications of the presence of biofilms were found in 63% of the sampled surfaces. The most commonly identified species were: Stenotrophomonas maltophilia, Pseudomonas geniculate and Pseudomonas aeruginosa.

Maes investigated the interaction between Salmonella Java and the harmless biofilm producer Pseudomonas putida, a species that is part of the natural microbiota in drinking water systems. To do this she developed a new model that imitates biofilm formation on the inside of the drinking water system.

The results of the study showed that Salmonella Java is a strong biofilm generator. Interestingly enough, when in the presence of Pseudomonas putida, biofilm formation was suppressed. This suppression was attributed to the competition between the 2 bacteria. Maes therefore concluded that Pseudomonas putida does indeed have potential as a biofilm suppressor and should be further investigated, as it may be possible in the future to monitor contaminations of broilers with Salmonella or Campylobacter, for example. Maes has since moved on to conduct other research at MID Sweden University.

Water quality in poultry barns can only be ensured when producers are vigilant, says Fairchild, who closed the interview by offering 4 tips for success. First, he says, producers should conduct water tests. Mineral tests should be done once a year. Bacterial tests only need to be done when something has changed, he adds, pointing to heavy weather events that impact the water table. After such an event, water should be sampled and tested within a couple of weeks. Fairchild reminds producers to change filters regularly and to flush water lines frequently. Finally, he says, producers should plan ahead before treating water to ensure that the contaminants in the water will not react negatively and cause the water system to become clogged.