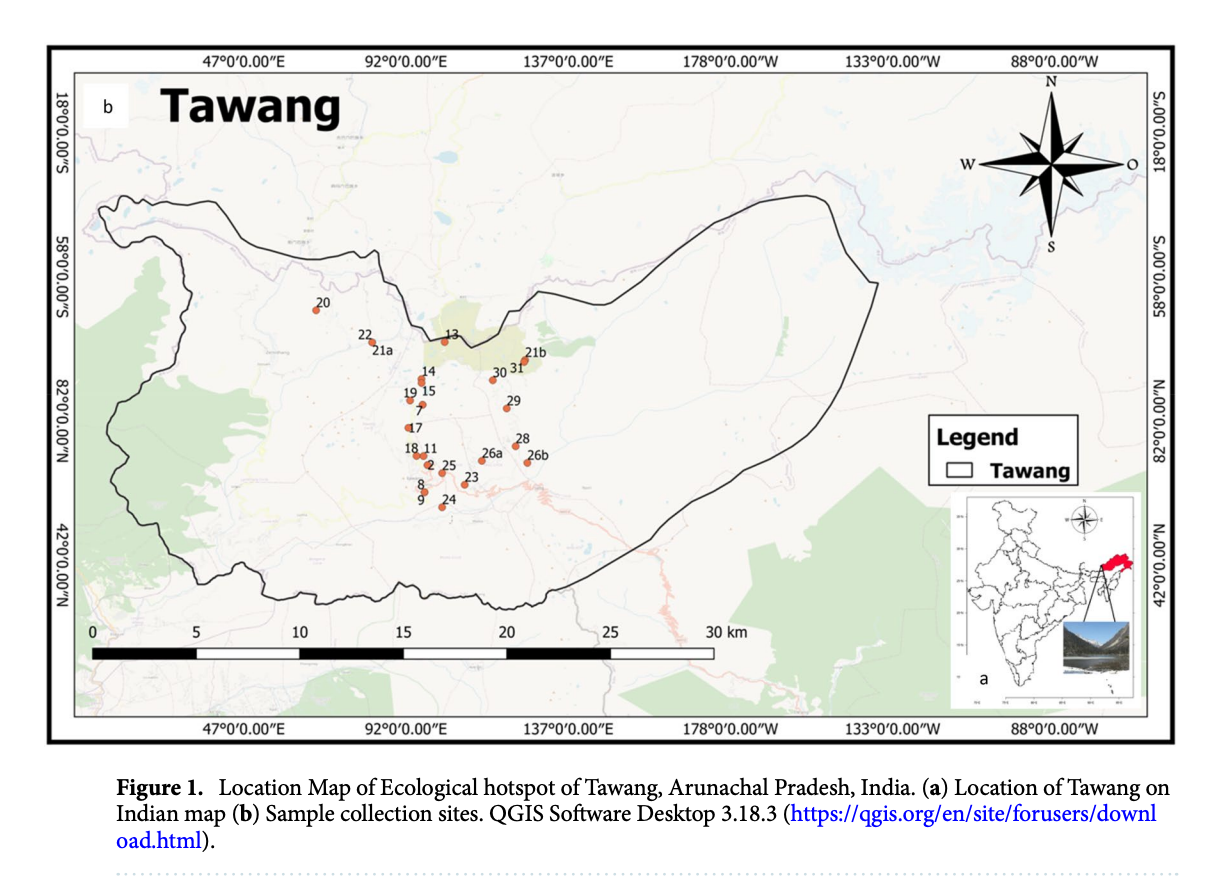 In this study,the water samples were collected from 31 sites of Tawang, Arunachal Pradesh, India (North-Eastern Himalaya), during the winter season to check the suitability of water for drinking and irrigation purposes.The study scientifically demonstrates the estimation of Water quality index (WQI) and hydrogeochemical characteristics of surface water samples by utilizing multivariate statistical methods. The main water quality parameters considered for this study were TDS, conductivity, salinity, pH, hardness, cations and anions. WQI was calculated in order to find out the deviation in the water quality parameters particularly with respect to BIS permissible limits.

The major infuencing factors responsible for the variation in these parameters were derived by using Principal component analysis (PCA) and Correlation matrix.To check the suitability of water for drinking purpose, hydrogeochemical facies and rock water interaction was derived by using well established methods such as Piper Plot (determine water type), WQI (Quality monitoring), and saturation index (for mineral dissolution). The results revealed that the silicate weathering was the main ionic source in comparison to carbonate weathering which is due to the higher dissolution capacity of silicate minerals.The results of the scattered plot between (Ca2+ + ­Mg2+)–(HCO3ˉ + ­SO4 2 ˉ) versus (Na+ + ­K+ )–Clˉ (meq/L) highlighted that ion exchange occurs between Mg2+ and Ca2+of surface water with Na+ and K+ of rock /soil.

This means that calcium ion was getting adsorbed, and sodium ion was getting released. The Ca2+–Mg2+– HCO3ˉ, Na+ –HCO3ˉand Na+ –Clˉ type of surface water suggested permanent and temporary hardness respectively in the studied region. The dominant cations of this study were Na+ and Ca2+ while the dominant anions were HCO3ˉ and SO4 2 ˉ. In order to check the suitability of water sources for irrigation, parameters like, Magnesium hazard (MH), Total hardness (TH), Permeability Index (PI), Kelly Index (KI), Sodium adsorption rate (SAR), Sodium percentage (Na%), and Residual sodium carbonate (RSC) were determined.

The results showed that 93% of the samples had PI score< 75, which indicates the suitability of the water for irrigation. Also the WQI calculation showed an average WQI value of 82.49, amongst which 61% samples were in the range of 0–50 being considered as good for drinking, while 39% were catagerised as unsuitable for drinking showing a value of> 50. Hence the above findings reveal that geogenic activities play a major role in infuencing the water quality of Tawang region. Hence suitable water treatment technologies or methods might be used to eliminate the non desirable elements and minerals present in surface water.