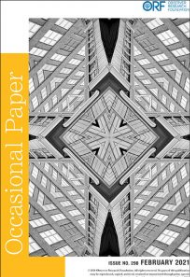 This paper analyses the patterns of virtual water trade (VWT) in agricultural products across the globe—VWT is the flow of water embedded in goods and services when they are traded—and the implications for alleviating water scarcity. Virtual water trade has been crucial in ameliorating water scarcity in virtual water-importing nations. At the same time, it has led to per capita water availability declining at a more rapid rate among the net virtual water-exporting countries like India, which are water-scarce, to begin with. This paper argues that despite a few shortcomings, virtual water trade remains a useful tool in water resources management. To be effective, it must be supported by economic instruments that capture the “scarcity value” of water and drive optimal decision-making in agricultural water resource management.

Demand for water has risen massively across the world in the last few decades, due to increasing world population, changes in living standards and consumption patterns, and expansion of irrigated agriculture.[1] The World Economic Forum, in its  Global Risks Report 2020  has noted that “water crises” are the largest global risks of the near future.[2] While “water wars”, as some fear, are still not likely, water scarcity is a growing concern that requires immediate attention.[3] Certain regions like the Middle East and North Africa (MENA) are extremely water-scarce and therefore dependent on other countries to meet parts of their basic water needs, especially in agriculture. Most of their domestic food demand is met through imports. These imports make up for the water scarcity in the region by utilising the water resources of other countries through the transfer of “virtual water”.

While “water wars”, as some fear, are still not likely, water scarcity is a growing concern that requires immediate attention

Virtual water refers to the quantum of water used to produce a good or service; it is the volume of water embedded in that good or service.[4] When goods and services are traded, all the factors used in their production phases, in a virtual sense, also move across and within countries and regions. The movement of such embedded water is known as “virtual water trade”.[a],[5] Virtual water trade has the potential to reduce global water scarcity by distributing water resources ‘virtually’ from the relatively water-surplus regions, to the water-scarce. By ensuring that virtual water transfers also take place from regions with higher water productivity to those with lower, it can ensure efficiency in global water use.

Historical evidence from the Roman Empire underlines the importance of virtual water trade in determining the resilience of a region/country against the twin threats of growing demand and climatic variability.[6] In that pre-industrial era, Romans used the virtual water trade embedded in food grains through the Mediterranean and Black Sea region to link the food surplus and deficit areas within the empire. This helped ensure a steady supply of grain to the main cities of the empire even when local water resources were insufficient to meet cultivation and domestic needs.[7] Although evidence is available only for trade, it can be assumed that virtual water trade was an important factor that spatially integrated the empire and also enhanced its longevity.[8]

Since the mid-20th century, water resources management has undergone a paradigm shift—from supply-side interventions to demand management. There has also emerged certain interdisciplinary approaches to policymaking in the form of integrated water resources management (IWRM).[b] A central tenet of IWRM is “clear and strict prioritisation of various types of needs and demands for water.”[9] Optimal allocation of a scarce resource, in this case water, among multiple uses, is the canonical definition of economics, as proposed by Sir Lionel Robbins.[10] An optimal strategy would involve putting water to its best possible use. Economic instruments such as price (equivalent to the marginal productivity of water) can play an important role in this optimisation exercise. In the presence of a market that reflects this information, regions or countries can decide on the most productive use of their water resources. Markets for water do exist in Chile, California, and the Murray-Darling basin in Australia. On 17 September 2020, the US’ CME Group and NASDAQ[c],[11] together announced the launch of the NASDAQ Velles California water futures market. But IWRM is yet to be incorporated into decision-making at the required scale in other places.

The World Bank has found that the agriculture sector accounts for 70 percent of water use across the world. Implementing IWRM in agricultural water resource planning can therefore alleviate water scarcity.[12] Agro-climatic conditions determine the water intensity of agricultural production across regions. If certain regions are not suitable for the production of water-intensive crops,[d] it is prudent to utilise the scarce water resources available for other purposes such as domestic or industrial consumption. The water demand for these other uses, especially domestic, entails  in-situ  consumption. But water requirement for food products can be met through imports of those products wherever feasible. If regions that are unsuitable for the cultivation of water-intensive products like paddy, import them from regions agro-climatically more suitable, the former would be virtually importing water and thus increasing its availability, albeit in virtual form.[13] This puts virtual water trade strategy at the centre of policies envisioned under an IWRM paradigm.

The subsequent sections discuss the evolution of the concept of virtual water trade within a standard theory of international trade, and the patterns of such trade across the world. The paper then analyses whether water resource endowments have been the primary factor in virtual water trade, by mapping virtual water exports and imports against the per capita water availability in the top virtual water-exporting and -importing countries. The results suggest a need to incorporate demand-side management through valuation of water resources as an integral element of making virtual water trade an efficient tool of IWRM and alleviating water scarcity.