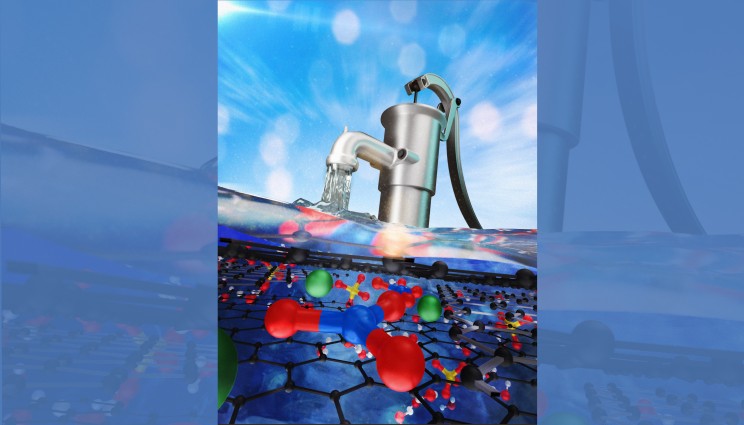 Nitrate is a troublesome groundwater contaminant that is mainly caused by fertilizer runoff on farmlands. Many wells in agricultural regions exceed the EPA limit for nitrate in drinking water, and without an economical treatment option the water is unfit for potable use.

But Lawrence Livermore National Laboratory (LLNL) and Stanford University researchers have developed a technology that can remove nitrate from water selectively, preserving beneficial minerals and dramatically reducing the cost of treatment compared with other purification methods, such as reverse osmosis.

Nitrate adsorbed into carbon slit pores (black). Researchers have developed a technology that can remove nitrate from water selectively, preserving beneficial minerals and dramatically reducing the cost of treatment compared with other purification methods. Image by Ryan Chen/LLNL

“Our technology can scale from under-sink to municipal-plant size and will increase freshwater availability in under-resourced areas,” said LLNL material scientist Patrick Campbell, co-lead author of a paper appearing online and in a future cover edition of the journal Environmental Science & Technology.

The contamination of water resources with nitrate is a growing and significant problem, especially in agricultural regions. Realizing this, the team used capacitive deionization electrodes made from ultramicroporous carbon with less than one nanometer-size pores that are perfect for removing nitrate molecules.

Capacitive deionization (CDI) is a water treatment technology that can be used to remove salt from low-salinity brackish waters. In addition to general desalination, CDI can be used for the selective removal of speciﬁc ionic contaminants. One of the major contaminants is nitrate, which is regulated by the U.S. Environmental Protection Agency to a maximum contaminant level in drinking water of 10 milligrams per liter.

However, studies suggest that the concentration of nitrate in groundwater is increasing by 1-3 milligrams per liter per year, making the development of eﬀective treatment methods increasingly important.

“It is reasonable to expect that a pore-size distribution of exclusively narrow pores would screen out common unwanted ions in favor of selectively adsorbing nitrate,” said Michael Stadermann, LLNL material scientist and co-lead author of the paper.

To demonstrate selectivity, the team chose chloride and sulfate because they are commonly found in run-off waters, and, together with nitrate, span a large cross section of hydrated ion properties. They found that the electrode removed nitrate from water much more effectively than it removed chloride and sulfate.

To better understand why nitrate is preferentially removed over sulfate and chloride, the team carried out ﬁrst-principles molecular dynamic simulations of chloride, nitrate and sulfate ions dissolved in bulk water.

“These high ﬁdelity simulations provide insight into the hydration structure of each ion, including geometry and solvation strength, which can be directly related to the ion selectivity observed in the experiments,” Campbell said.