Global changes in wetlands help clarify the decline of shorebirds 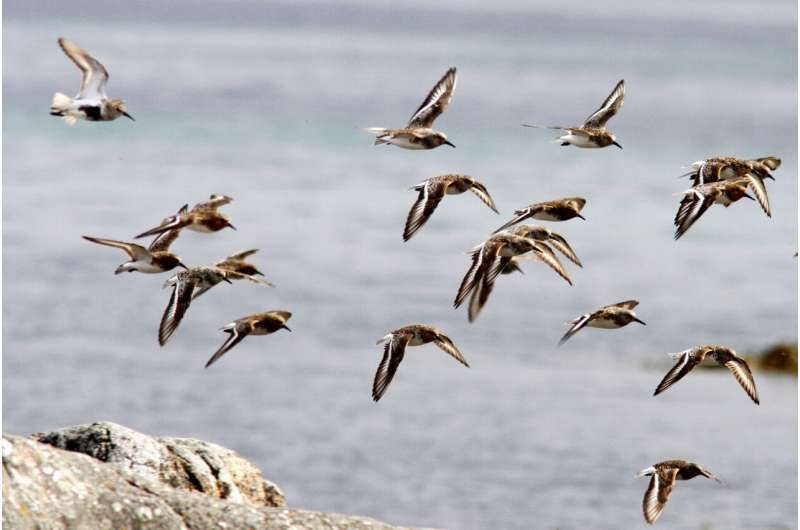 A team of researchers of the Faculty of Sciences of the University of Lisbon (Ciências ULisboa) quantified for the first time global environmental changes that may help understanding the declines of shorebirds. Using products of remote sensing, the team quantified habitat changes in 907 Important Bird and Biodiversity Areas (IBAs) relevant for non-breeding shorebirds over the last two decades.

The researchers focused on changes in intertidal feeding areas used by shorebirds during the low tide, as well as high tide roosting areas. The results are now published in Science of The Total Environment.

Global changes were particularly significant at roosting areas, where there have been a propagation of vegetation and the expansion of urban infrastructures. Feeding areas changed dramatically in the East Asian—Australasian Flyway due to land reclamation for urban and industrial uses, and the development of aquaculture.

The study stresses that these changes may be critical for the conservation of shorebirds, in particular to some species of the East Asian—Australasian Flyway that are facing population collapses due to habitat loss.

Shorebird declines are occurring worldwide but the causes are not fully understood. Recent literature suggests that the deterioration of habitat quality at their non-breeding areas, mostly located in temperate and tropical coastal wetlands, might be a major contributing factor. However, most studies carried out so far tend to be restricted to a few regions. Remote sensing can help correct such geographical bias on knowledge by providing a standardized approach on how shorebird habitats have been changing over the last few decades at a global scale. Here we analyzed time series of remote sensing classifications of tidal flats and land cover to quantify worldwide habitat changes in coastal Important Bird and Biodiversity Areas (IBAs) relevant for non-breeding shorebirds over the last two decades. Globally, supratidal areas (used

Yet, we found striking losses of tidal flats in IBAs distributed in several regions of the East Asian - Australasian Flyway. At supratidal areas, there was a general expansion of marshland, grassland and urban areas, contrasting with a decline of barren land, woodland and cropland. The expansion of marshland occurred in IBAs of most regions of the world. Urban areas also expanded consistently in supratidal areas within the most populated regions of the world. The loss of barren land is particularly concerning as it may translate into a loss of high-quality roosts and it was highly frequent in IBAs of all migratory flyways. Overall, our results confirm the large losses of shorebird habitat in the East Asian - Australasian Flyway reported in the literature, and highlight unreported generalized changes in supratidal habitats, such as the expansion of marshland and the loss of barren land, that may have negative implications for shorebirds, deserving further research and consideration in conservation programs.