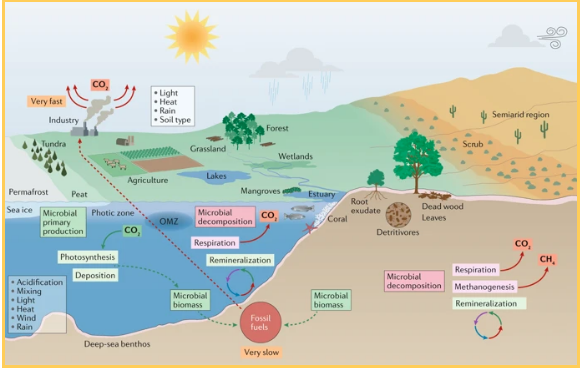 Research is raising serious concerns about climate change's impact on the world's tiniest organisms, and scientists say much more attention is needed.

In the Anthropocene, in which we now live, climate change is impacting most life on Earth. Microorganisms support the existence of all higher trophic life forms. To understand how humans and other life forms on Earth (including those we are yet to discover) can withstand anthropogenic climate change, it is vital to incorporate knowledge of the microbial ‘unseen majority’. We must learn not just how microorganisms affect climate change (including production and consumption of greenhouse gases) but also how they will be affected by climate change and other human activities. This Consensus Statement documents the central role and global importance of microorganisms in climate change biology. It also puts humanity on notice that the impact of climate change will depend heavily on responses of microorganisms, which are essential for achieving an environmentally sustainable future.

Human activities and their effects on the climate and environment cause unprecedented animal and plant extinctions, cause loss in biodiversity1,2,3,4 and endanger animal and plant life on Earth5. Losses of species, communities and habitats are comparatively well researched, documented and publicized6. By contrast, microorganisms are generally not discussed in the context of climate change (particularly the effect of climate change on microorganisms). While invisible to the naked eye and thus somewhat intangible7, the abundance (~1030 total bacteria and archaea)8 and diversity of microorganisms underlie their role in maintaining a healthy global ecosystem: simply put, the microbial world constitutes the life support system of the biosphere. Although human effects on microorganisms are less obvious and certainly less characterized, a major concern is that changes in microbial biodiversity and activities will affect the resilience of all other organisms and hence their ability to respond to climate change9.

Microorganisms have key roles in carbon and nutrient cycling, animal (including human) and plant health, agriculture and the global food web. Microorganisms live in all environments on Earth that are occupied by macroscopic organisms, and they are the sole life forms in other environments, such as the deep subsurface and ‘extreme’ environments. Microorganisms date back to the origin of life on Earth at least 3.8 billion years ago, and they will likely exist well beyond any future extinction events.

Although microorganisms are crucial in regulating climate change, they are rarely the focus of climate change studies and are not considered in policy development. Their immense diversity and varied responses to environmental change make determining their role in the ecosystem challenging. In this Consensus Statement, we illustrate the links between microorganisms, macroscopic organisms and climate change, and put humanity on notice that the microscopic majority can no longer be the unseen elephant in the room. Unless we appreciate the importance of microbial processes, we fundamentally limit our understanding of Earth’s biosphere and response to climate change and thus jeopardize efforts to create an environmentally sustainable future6 (Box 1).

The Alliance of World Scientists and the Scientists’ Warning movement was established to alert humanity to the impacts of human activities on global climate and the environment. In 1992, 1,700 scientists signed the first warning, raising awareness that human impact puts the future of the living world at serious risk267. In 2017, 25 years later, the second warning was issued in a publication signed by more than 15,000 scientists5. The movement has continued to grow, with more than 21,000 scientists endorsing the warning. At the heart of the warning is a call for governments and institutions to shift policy away from economic growth and towards a conservation economy that will stop environmental destruction and enable human activities to achieve a sustainable future268. Linked to the second warning is a series of articles that will focus on specific topics, the first of which describes the importance of conserving wetlands269. A film, The Second Warning, also aims to document scientists’ advocacy for humanity to replace ‘business as usual’ and take action to achieve the survival of all species by averting the continuing environmental and climate change crisis.

Complementing the goals of the Alliance of World Scientists are the United Nations Sustainable Development Goals, which were formulated to realize dignity, peace and prosperity for people and the planet, now and into the future6. The goals are framed around environmental, economic and social needs, and address sustainability through the elimination of poverty, development of safe cities and educated populations, implementation of renewables (energy generation and consumption) and urgent action on climate change involving equitable use of aquatic and terrestrial systems to achieve a healthy, less polluted biosphere. The goals recognize that responsible management of finite natural resources is required for the development of resilient, sustainable societies.

Our Consensus Statement represents a warning to humanity from the perspective of microbiology. As a microbiologists’ warning, the intent is to raise awareness of the microbial world and make a call to action for microbiologists to become increasingly engaged in and for microbial research to become increasingly integrated into the frameworks for addressing climate change and accomplishing the United Nations Sustainable Development Goals (Box 2). It builds on previous science and policy efforts to call attention to the role of microorganisms in climate change7,126,270,271,272 and their broad relevance to society7. Microbiologists are able to endorse the microbiologists’ warning by becoming a signatory.

Scope of the Consensus Statement

For the purpose of this Consensus Statement, we define ‘microorganism’ as any microscopic organism or virus not visible to the naked eye (smaller than 50 μm) that can exist in a unicellular, multicellular (for example, differentiating species), aggregate (for example, biofilm) or viral form. In addition to microscopic bacteria, archaea, eukaryotes and viruses, we discuss certain macroscopic unicellular eukaryotes (for example, larger marine phytoplankton) and wood-decomposing fungi. Our intent is not to exhaustively cover all environments nor all anthropogenic influences but to provide examples from major global biomes (marine and terrestrial) that highlight the effects of climate change on microbial processes and the consequences. We also highlight agriculture and infectious diseases and the role of microorganisms in climate change mitigation. Our Consensus Statement alerts microbiologists and non-microbiologists to address the roles of microorganisms in accelerating or mitigating the impacts of anthropogenic climate change (Box 1).

Marine biomes cover ~70% of Earth’s surface and range from coastal estuaries, mangroves and coral reefs to the open oceans (Fig. 1). Phototrophic microorganisms use the sun’s energy in the top 200 m of the water column, whereas marine life in deeper zones uses organic and inorganic chemicals for energy10. In addition to sunlight, the availability of other energy forms and water temperature (ranging from approximately −2 °C in ice-covered seas to more than 100 °C in hydrothermal vents) influence the composition of marine communities11. Rising temperatures not only affect biological processes but also reduce water density and thereby stratification and circulation, which affect organismal dispersal and nutrient transport. Precipitation, salinity and winds also affect stratification, mixing and circulation. Nutrient inputs from air, river and estuarine flows also affect microbial community composition and function, and climate change affects all these physical factors.

Fig. 1: Microorganisms and climate change in marine and terrestrial biomes. 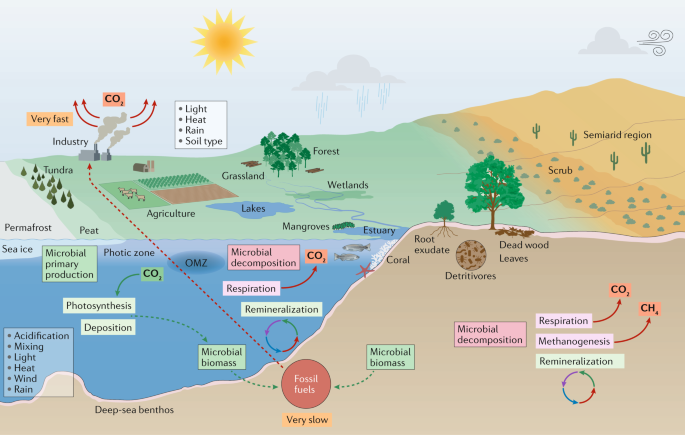 In marine environments, microbial primary production contributes substantially to CO2 sequestration. Marine microorganisms also recycle nutrients for use in the marine food web and in the process release CO2 to the atmosphere. In a broad range of terrestrial environments, microorganisms are the key decomposers of organic matter and release nutrients in the soil for plant growth as well as CO2 and CH4 into the atmosphere. Microbial biomass and other organic matter (remnants of plants and animals) are converted to fossil fuels over millions of years. By contrast, burning of fossil fuels liberates greenhouse gases in a small fraction of that time. As a result, the carbon cycle is extremely out of balance, and atmospheric CO2 levels will continue to rise as long as fossil fuels continue to be burnt. The many effects of human activities, including agriculture, industry, transport, population growth and human consumption, combined with local environmental factors, including soil type and light, greatly influence the complex network of microbial interactions that occur with other microorganisms, plants and animals. These interactions dictate how microorganisms respond to and affect climate change (for example, through greenhouse gas emissions) and how climate change (for example, higher CO2 levels, warming, and precipitation changes) in turn affect microbial responses. OMZ, oxygen minimum zone.

The overall relevance of microorganisms to ocean ecosystems can be appreciated from their number and biomass in the water column and subsurface: the total number of cells is more than 1029 (refs8,12,13,14,15,16) and the Census of Marine Life estimates that 90% of marine biomass is microbial. Beyond their sheer numbers, marine microorganisms fulfil key ecosystem functions. By fixing carbon and nitrogen, and remineralizing organic matter, marine microorganisms form the basis of ocean food webs and thus global carbon and nutrient cycles13. The sinking, deposition and burial of fixed carbon in particulate organic matter to marine sediments is a key, long-term mechanism for sequestering CO2 from the atmosphere. Therefore, the balance between regeneration of CO2 and nutrients via remineralization versus burial in the seabed determines the effect on climate change.

In addition to getting warmer (from increased atmospheric CO2 concentrations enhancing the greenhouse effect), oceans have acidified by ~0.1 pH units since preindustrial times, with further reductions of 0.3–0.4 units predicted by the end of the century17,18,19. Given the unprecedented rate of pH change19,20,21, there is a need to rapidly learn how marine life will respond22. The impact of elevated greenhouse gas concentrations on ocean temperature, acidification, stratification, mixing, thermohaline circulation, nutrient supply, irradiation and extreme weather events affects the marine microbiota in ways that have substantial environmental consequences, including major shifts in productivity, marine food webs, carbon export and burial in the seabed19,23,24,25,26,27,28,29.

Marine phytoplankton perform half of the global photosynthetic CO2 fixation (net global primary production of ~50 Pg C per year) and half of the oxygen production despite amounting to only ~1% of global plant biomass30. In comparison with terrestrial plants, marine phytoplankton are distributed over a larger surface area, are exposed to less seasonal variation and have markedly faster turnover rates than trees (days versus decades)30. Therefore, phytoplankton respond rapidly on a global scale to climate variations. These characteristics are important when one is evaluating the contributions of phytoplankton to carbon fixation and forecasting how this production may change in response to perturbations. Predicting the effects of climate change on primary productivity is complicated by phytoplankton bloom cycles that are affected by both bottom-up control (for example, availability of essential nutrients and vertical mixing) and top-down control (for example, grazing and viruses)27,30,31,32,33,34. Increases in solar radiation, temperature and freshwater inputs to surface waters strengthen ocean stratification and consequently reduce transport of nutrients from deep water to surface waters, which reduces primary productivity30,34,35. Conversely, rising CO2 levels can increase phytoplankton primary production, but only when nutrients are not limiting36,37,38.