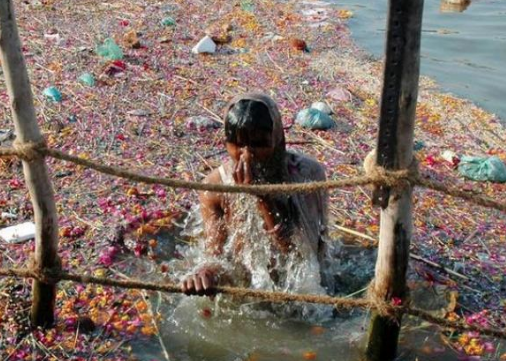 India Today TV covered the stretch on Ganga from Uttarakhand to Bihar and reported the work completed, the work in progress and unfulfilled promises, under the National Mission for Clean Ganga. Govt says it aims at providing comprehensive and sustainable solutions for major pollution hotspots along the stretch of 97 towns and 4,465 villages along the Ganga. (Photo: Reuters file)

After India Today TV's fact check report " X Factor-Unquiet Ganga ", the government has claimed that ongoing work to clean the river continues at a fast pace and many projects have been completed and are undergoing trial run while more have been sanctioned.

In a rebuttal statement to the report, National Mission for Clean Ganga (NMCG) has provided statistics on tapped drains and near-completion treatment plants.

Providing fresh data, NMCG states that the mission aims at providing "comprehensive and sustainable solutions for major pollution hotspots along the stretch of 97 towns and 4,465 villages on the Ganga stem".

India Today TV covered the stretch on Ganga from Uttarakhand to Bihar and reported the work completed, the work in progress and unfulfilled promises, under the mission.

'Unquiet Ganga' showed sewage treatment plants (STPs) that are using latest technology to clean human/industrial waste, though high capacity STPs are under construction with deadlines between 2019-2020.

India Today TV utilised data from NMCG website and reported 63 sewerage projects have been setup along the river from Uttarakhand till West Bengal. Nineteen of them have started functioning in Uttarakhand.

The government claims that as per latest status, a total of 151 sewage projects have been taken up. "Of these, 112 are on the main stem of Ganga and 39 projects on its tributaries. Thirty seven sewerage sector projects have been completed."

However, the data, as reported by India Today TV, can still be found on the official website.

"Large infrastructure projects take time for project preparation, procurement and execution. There has been attempt to also carry out a condition assessment of old projects and rehabilitate, upgrade wherever feasible, along with new assets. The program has gathered momentum which has led to several projects getting completed or reaching an advanced stage of completion," clarifies Sanjam Chima, senior consultant, Communications and Public Outreach, NMCG.

As per the studied of NMCG and also an IIT consortium report, earlier the STP projects did not deliver enough due to lack of engineering supervision, gaps in proper operation and maintenance, power supply, disputes among multiple agencies, lack of reliable and GIS based data, among others. This fact was also reported in our ground reports.

The government ensures that for proper delivery and sustainability, performance-based models like HAM have been adopted in STPs along with the 'One city one operator concept'.

Monitoring has been improved and modernised. Besides this, the public private partnership (PPP) approach of Hybrid Annuity Mode and Performance Linked Payment for sewerage projects, 15 years long term operation and maintenance (O&M) has been certified.

The total sanctioned cost for projects in Uttarakhand (sewage and ghat works) is Rs 1,337 crore. It is to be utilised over the next 15 years under O&M approach.

In Kanpur, an important interception by government in November 2018 was to tap the Sismau drain, whose sewage has been diverted to a sewage treatment plant (STP).

NMCG maintains that the pollution caused by Sisamau drain that discharged nearly 140 MLD untreated sewage every day into Ganga will be solved as STP treatment for was completed in November 2018. It was part of the agenda since Ganga Action Plan I.

In Kanpur, India Today TV reported about tanneries that have been shut down by the government. These tanneries were the main source of industrial pollution into Ganga in Uttar Pradesh.

NMCG said that a 20 MLD common effluent plant (CETP) has been sanctioned with an estimate cost of Rs 617 crore. This project has integrated approach of including conveyance system from individual units, large chrome recovery plants, a pilot ZLD plant and CTP to get rid of the odour.

"Funding for the project is mostly without the contribution of tannery owners. They should have contributed as per Polluter Pays Principle," NMCG said.

Meanwhile, tannery owners have asked for an independent inquiry supervised by a retired judge to confirm role of tanneries in releasing chemicals in the Ganga.

In Bihar, India Today TV reported that Ganga river is moving away from the ghats, as government focus remained on man-made interventions.

The government guarantees that during the construction of the riverfront in Patna, steps were also taken to check any adverse environmental impact.

"Mission has taken several steps in association with the Wildlife Institute of India for conservation of aquatic life," NMCG claimed.

Meanwhile, Prof RK Sinha, engaged by project authorities to advise during the construction period, said the Gangetic dolphins have moved to another location and the river flow reduced in the past few decades in Patna.

The government has said work on main STPs in Bihar is set to be started.
"Beur STP (43 MLD) work is completed and trial run is being carried out before the scheduled timeframe, which was set at October 2019. Two other STP projects, namely Karmalichak (37 MLD) and Saidpur STP (60 MLD) will be completed by July 2019. This will be ahead of their actual completion time of October 2019."

After completion of these projects, untreated sewage disposal through drains in Patna RFD region will be stopped completely, the government claims.

In Patna city, the government states that 100 per cent sewerage network scheme has been taken up in order to ensure that sewage generated in the city is not discharged into the Ganga.

The state government has adopted a policy for reusing treated waste water generated from STPs for irrigation purposes during the non-monsoon period.