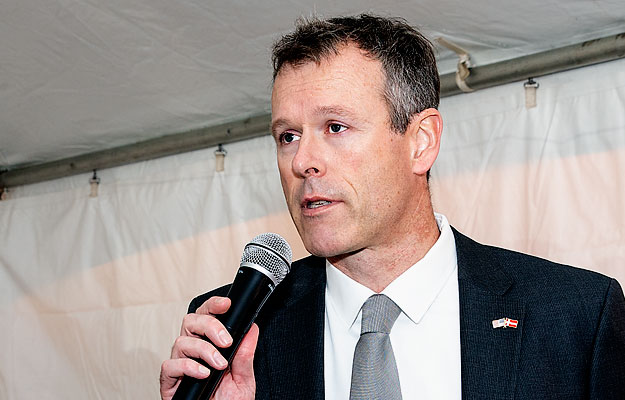 Applied Biomimetic, a leader in the convergence of polymer and protein membrane technologies, hosted a Grand Opening of its new production facility in Gaithersburg, Maryland on November 6th.

Dignitaries included Mads Clausen, chairman of Applied Biomimetic, the Danish Ambassador to the USA, Her Excellency, Lone Dencker Wisborg, and members of the State of Maryland, Montgomery County and City of Gaithersburg.

The red ribbon was cut by Ambassador Wisborg, and Mr. Jorgen Clausen, Chairman of the Board of Danfoss, one of Applied Biomimetic’s original investors. This was followed by a facility tour and reception celebration for the 100+ attendees representing various partners that contributed to the factory’ design and construction.

Danish Ambassador to the USA, Her Excellency, Lone Dencker Wisborg

CEO Steen Sondergaard Nissen, welcomed and thanked the crowd:
“This has no doubt been an interesting journey for Applied Biomimetic to get to this point – not just during the last couple of years when we relocated here to Gaithersburg, but also many years ago, when we started in the basement of university facilities in Cincinnati and a laboratory at the Danfoss campus in Denmark.

The red ribbon was cut by Ambassador Wisborg, and Mr. Jorgen Clausen, Chairman of the Board of Danfoss, one of Applied Biomimetic’s original investors.

Looking back, the company was originally founded with the goal of making membranes for desalination of sea water based on this unique protein, called aquaporin, that transports water across cell membranes. That continues to be the ambition but, in the meantime, we are doing so much more and we have – at least to an engineer – some cool and interesting technology, which is used in applications such as enzyme production and critical nutrition products like infant formula.