Hanoi applies new technology to clean up To Lich river 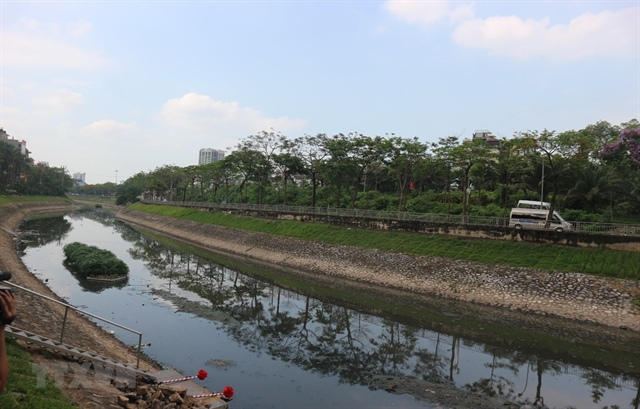 A sewer system under To Lich river in Hanoi is being built using unprecedented technology designed by a Japanese company in a bid to clean up the notoriously polluted river.

Hanoi (VNA)  - A sewer system under To Lich river in Hanoi is being built using unprecedented technology designed by a Japanese company in a bid to clean up the notoriously polluted river.

This is part of the Yen Xa wastewater treatment system funded by Japanese  official development assistance  (ODA) with the goal of “resurrecting” the capital city’s rivers that are currently overwhelmed with raw sewage,  by redirecting the untreated source of pollution to the treatment plant instead of discharging it directly into water sources.

The project includes the construction of the 680-million-USD Yen Xa wastewater treatment facility in Thanh Tri district with a processing capacity of 270,000 cu.m per day, and three underground sewer systems for Lu river, Ha Dong district and To Lich river.

The entire length of the pipelines for the project is about 52.6km, with pipe diametres ranging from 315-2,200mm.

The construction of the underground sewer for the To Lich River is the most important component of the four, which will be 21km long including an 11.4km section running through the river from Hoang Quoc Viet street in Cau Giay district to Quang bridge in Thanh Tri district – which began on May 18 afternoon.

The project is considered to be of key importance as it will collect wastewater from residential areas in the city’s crowded urban districts – Tay Ho, Ba Dinh, Dong Da, Cau Giay and Hai Ba Trung – and parts of the outlying rural districts of Thanh Tri and Ha Dong, in order to keep the To Lich river clean.

A Japanese contractor is in charge of implementing this component.

This component will employ a tunneling method known as pipe jacking, which allows pipes to be laid 6-19m under the river’s bed along a 13km section.

According to Nguyen Van Hung, Director of the Hanoi Management Board of Investment, Construction Projects on Water Supply, Drainage and Environment – the main investor of the project, the method caused little disruption to overground activities such as land clearance.

This would be the first time the method had been used in Hanoi, Hung added.

A JICA representative said that due to the importance of the To Lich component, Hanoi’s management board needed to make sure that all of JICA’s measures and guidelines regarding the environment, society and safety would be strictly observed during the implementation of the component.

Nguyen Duc Chung, Chairman of the municipal People’s Committee, said the components for the project had “basically” met the anticipated progress, but insisted they should be completed ahead of schedule as people had been suffering from pollution in the river for many years now.

To Lich used to be connected to the Hong (Red) river but became what was colloquially known as ‘dead river’ when there was no water exchange with other freshwater sources while being subject to up to 150,000 cu.m of untreated household wastewater a day.

The project was expected to help address the pollution in the To Lich river and revive the waterway, a long-standing wish of many Hanoians, Chung said, adding that he expected the project to be operational in 2021.