Headworks Visits Its Screen Installation at The Largest Wastewater Treatment Plant in The U.S. 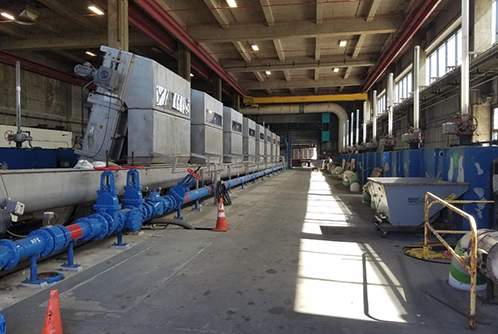 One of the most well-known wastewater treatment plants in the USA is the Hyperion Water Reclamation Plant in Los Angeles, California.

Hyperion WRP is located in southwest Los Angeles next to the Dockweiller State Beach on Santa Monica Bay near LAX airport. Starting out as a simple screening plant in 1925, today the plant is considered one of the largest wastewater treatment plants in the world. In the United States, the plant is the largest, by volume, west of the Mississippi River. A short and extremely interesting history of the plant can be found on Wikipedia.

Hyperion WRP reclaims an astonishing 250 mgd (950,000 m3/day) per day of wastewater! The plant is not the first to reclaim its wastewater, but it is the first on such a large scale. Besides being one of the largest wastewater treatment plants in the world, because of its location and appearance the plant has been used several times for films and television shows, among them  The Battle for the Planet of the Apes  and  The Terminator . Los Angeles is not a city looking for a quick, cheap fix to their treatment solutions without regard to the impact the wrong equipment might have on operations or costs over time.  Their operators in Los Angeles understand that each purchase is an investment of their citizens’ tax payer dollars, and the equipment and systems they specify for their plants must work dependably while being robust enough to take the beatings that these extremely large plants must deal with day-in and day-out with low life-cycle costs.  Their goal is to efficiently reclaim for reuse as much of the municipality’s wastewater as possible.  Thus, they have a strong reputation as one of the most innovative wastewater treatment facilities in the world.

As Headworks’ installation base and its reputation grew across the country, Los Angeles, like many other cities, recognized the superiority of the design and quality of the Headworks Bar Screen.  The City purchased the first four units for their Tillman plant 12 years ago, then two more units to improve their plant at Terminal Island. Finally, in 2016, Hyperion WRP started planning to have its aging and difficult to maintain old fashioned climber-type screens upgraded.  Headworks was named as the sole source for the new screening equipment for the project! “The equipment works so well that the plant is in awe of what it pulls out. Way more than before.” Robert Nicol, Foreman of The Murray Company, Hyperion WRP project contractor.

Headworks provided the Screens in pairs for installation with each pair having one Screen with 3/4’ (19mm) Bar Spacing and the other having 3/8” (10mm) Bar Spacing. The Bar Screens are installed in 10’ wide x 14’ deep channels, each designed for a maximum flow of 133 mgd (500,000 m3/d). The new Sluice Trough collects the screenings discharge from all of the Bar Screens for distribution to two (2) different solids handling processes at the plant. The Sluice Trough is an enormous 170 feet (52m) long with a conveying flow of approximately 900 gpm (3,300 lpm). An interesting factoid is that in addition to the regular flow coming to the plant, solids collected from other LA Plants are collected and pumped to Hyperion WRP for final removal and treatment. These solids travel for many miles underground across Los Angeles. Hyperion Water Reclamation Plant is considered one of the most technologically advanced wastewater treatment plants in the world and Headworks is proud to have been selected to provide its gold standard MS Series Bar Screens for their screening needs. Headworks co-founder and Senior VP Gerald Seidl visited these babies a few weeks ago and created a short video of the facility.  Take a look at one of the largest screening operations in the world.

With over 25 years of experience in every type of municipal challenge, our talented engineers will have the right solution for your screening and compacting needs.  Contact our local manufacturers’ representatives in your area or our sales engineers at hw@headworksintl.comor +1.713.647.6667 to discuss how we can get you the results you’re looking for! See all our product lines and read more about how we solve problems around the world at www.headworksinternational.com.