Health of Australia’s environment less than 1 out of 10 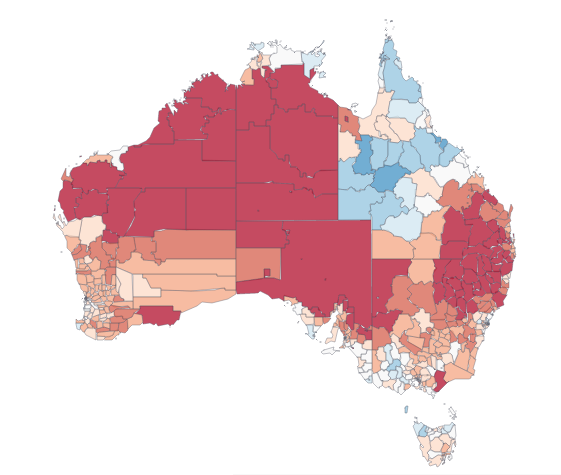 2019 was the year Australians confronted the fact that a healthy environment is more than just a pretty waterfall in a national park; a nice extra we can do without. We do not survive without air to breathe, water to drink, soil to grow food and weather we can cope with.

Every year, we collate a vast number of measurements on the state of our environment: weather, oceans, fire, water, soils, vegetation, population pressure, and biodiversity. The data is collected in many different ways: by satellites, field stations, surveys and so on.

We process this data into several indicators of environmental health at both national and regional levels.

The report for 2019, released today, makes for grim reading. It reveals the worst environmental conditions in many decades, perhaps centuries, and confirms the devastating damage global warming and mismanagement are wreaking on our natural resources.

Immediate action is needed to put Australia’s environment on a course to recovery.

Environment scores in the red

From the long list of environmental indicators we report on, we use seven to calculate an Environmental Condition Score (ECS) for each region, as well as nationally.

These seven indicators – high temperatures, river flows, wetlands, soil health, vegetation condition, growth conditions and tree cover – are chosen because they allow a comparison against previous years. In Australia’s dry environment, they tend to move up and down together, which gives the score more robustness. See the interactive graphic below to find the score for your region.

Environmental condition scores by local government area, and values for each of the seven indicators. See more data on www.ausenv.online.

Nationally, Australia’s environmental condition score fell by 2.3 points in 2019, to a very low 0.8 out of ten. This is the lowest score since at least 2000 – the start of the period for which we have detailed data.

Condition scores declined in every state and territory. The worst conditions were seen in the Northern Territory (0.2 points), New South Wales (0.3 points) and Western Australia (0.4 points), with the latter also recording the greatest decline from the previous year (-5.7 points).

What is most striking is that almost the entire nation suffered terrible environmental conditions in 2019. In each case, the changes can be traced back to dry, hot conditions. Only parts of Queensland escaped the drought.

Comparing local government areas, the worst conditions occurred in Armidale and Gwydir in northern NSW. In contrast, Winton and Townsville in Queensland escaped the overall poor conditions, thanks to the beneficial impact of high rainfall early in the year – although those same events also caused floods killing around 600,000 livestock.

SOURCE ON THE CONVERSATION AND LINK TO FULL ARTICLE