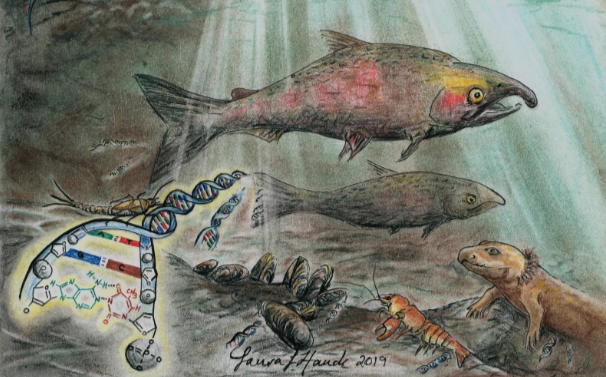 For the first time, researchers have used a novel genomics-based method to detect the simultaneous presence of hundreds of organisms in a stream.

Scientists at Oregon State University and the U.S. Forest Service Pacific Northwest Research Station recently published the results of their findings in the journal Environmental DNA.

For the study, the collaborators extracted genetic material from an assortment of physical matter left behind in a stream by a wide range of organisms – from fish to flies – including skin cells and excrement. Using this method, they detected microscopic species as well.

Although they weren’t found in this study, this method has the potential to detect potent plant-damaging water molds that are responsible for root and stem rot diseases, and pathogens that cause fungal diseases such as Chytrid fungus, which is killing amphibians all over the world.

Some of the key applications for the method include monitoring disease, invasive species, and rare or endangered species, said Tiffany Garcia, an aquatic ecologist in Oregon State’s College of Agricultural Sciences and co-author on the study.

“This is like sampling the air in a terrestrial environment and getting airborne cues from all the different species, which is currently impossible. But with water, it’s possible,” Garcia said.

The new method could offer an alternative to electrofishing, which sends an electric current through water to temporarily stun fish and has been the chosen method for sampling fish populations in rivers and streams. The new method used by the Oregon State and Forest Service researchers, which used a microfluidic device, has several advantages over electrofishing, according to the researchers.

Collecting environmental DNA is less labor-intensive than electrofishing, it doesn't stress the organisms, and it doesn't require animal handling permits, they said.

“Single species eDNA work has been around for a while, but our use of a microfluidic platform greatly expands the approach,” said Laura L. Hauck, a molecular biologist with the Pacific Northwest Research Station and co-lead author on the study. “We can still hone in on a single species of interest but at the same time we are capturing biodiversity and ecosystem health data from hundreds of organisms – all from that same single sample.”

For the study, the research team collected water samples from five sites in Fall Creek in the Oregon Coast Range in 2017. Water samples were collected immediately prior to electrofishing surveys. They filtered three-liter samples through fine mesh filters to collect biological particles in the water.

The filters were then brought back to a laboratory to extract and analyze the DNA. Using computer programs, the researchers classified 3.2 million DNA sequences into 828 predicted taxonomic groups by comparing them to sequences contained in GenBank, the international genetic sequence database maintained by the U.S. National Institutes of Health.

“When we compared our water samples to the electrofishing results, we found the same species of fish, amphibians and crayfish, but in addition we detected the whole community of organisms that were inhabiting that stream,” said Kevin Weitemier, a research associate at OSU and co-lead author on the study.

The water samples, it turned out, contained DNA from 647 species, including 307 insects.

Funding for the research was provided by the Pacific Northwest Research Station and National Council for Air and Stream Improvement.