How San Diego Scientists Use E. Coli To Test For Toxins In Water 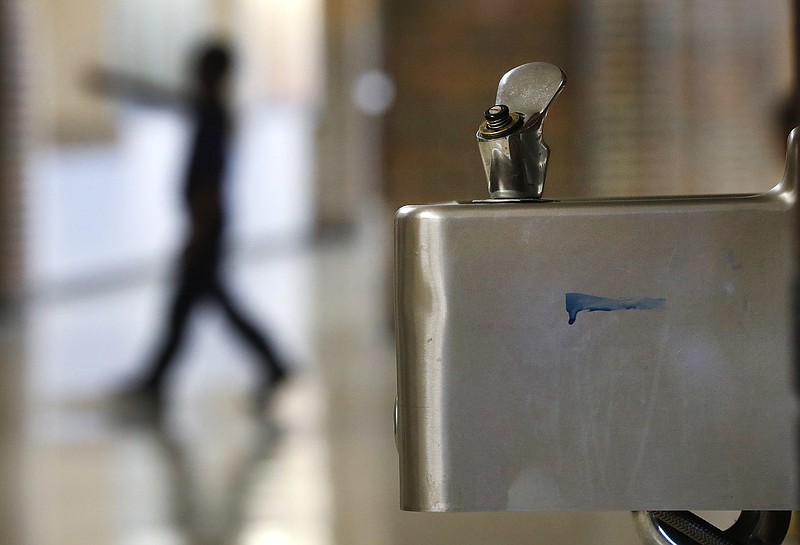 Since 2017, the district has tested thousands of water fountains and taps. It also reports levels of lead well below what the government requires. But, Naji said it’s hard to monitor lead and other heavy metals continuously.

"Our testing protocols are incredibly strict … that’s time-consuming, right?" he said. "To secure the water fountains for a night, to test the next day, to send it to a laboratory and send back the results,"

So contamination may not be detected as it’s happening. The problem is larger tests can be expensive and time-consuming. And cheaper tests may only be able to detect a few contaminants at one time. This situation is an issue for any water system where people and children can be exposed to toxins, like in a household.

Bio-engineers Elizabeth Stasiowski, Nick Csicsery and Gregoire Thouvenin have been working on an E. coli bacteria-based water sensing technology at this lab on the UC San Diego campus, Feb. 6, 2020.

Bacteria To The Rescue

That’s why San Diego researchers looked for a solution. At a UC San Diego lab, bio-engineer Elizabeth Stasiowski opens up a machine.

"Alright, so this is the Singer instrument that we use to spot the cells," Stasiowski said.

Thanks to this instrument, and its ability to precisely place tiny drops of cell matter — the device can hold 2,000 different strains of live E. coli. These E. coli, which are not harmful to humans, each have a special property.

"We’ve genetically modified the E. coli to light up when a specific metal is present," Stasiowski said.

And under a special light, the bacteria glow. Stasiowski pointed to openings on a chip.

"Where you see these dots, we put our media in, which has the cell nutrients and also where the metals go in," she said. "And then the cells will respond by fluorescence."

Bacteria interact with metals. But, usually tests with bacteria only sense one metal at a time. So researchers built this device with thousands of genetically modified bacteria types to detect many toxins at once and in real time.

"I think of it as a cartridge that’s consumable that you can use for a couple weeks, and you would plug it in and hook up a water line to it, and it would run," Stasiowski said.

The cartridge is placed inside a box. There’s a sensor that takes a picture and captures the E. coli as they interact with metals. So the sensor can tell what’s there and how much of it. The box records and presents those results.

But since the E. coli are alive the owner would have to replace the cartridge with new bacteria every two weeks to a month. Stasiowski said this research took years to complete, but she believes it can have an impact helping check their water around the clock.

"The science of this project is extremely exciting," she said. "We've taken E. coli, which is something people are normally scared of and makes them sick, and found a way to engineer it to prevent people from being sick."

UC San Diego bioengineer Elizabeth Stasiowski shows off a box with an E. coli device and an imaging system, Feb. 6, 2020.

Taking The Device To Market

"We’re trying to make it smaller, more robust environmentally so it can be deployed anywhere," Cookson said.

Since 2015, employees at the company have been trying to turn it into a product anyone can access.

"Where I think we could have a big impact, for example, is lead," Cookson said. "Lead is the kind of thing where contamination happens in bursts. If you could deploy our sensor in an area of concern, where you have contamination coming and going you could catch it as it’s happening."

Cookson said the company plans to deploy a sensor at a government site this year. Right now the package costs around $5,000. But she said the company needs to collect more data on the sensor in the field and make it smaller and cheaper so more people can buy it.

"Ultimately, if we could get one of these in every drinking fountain at schools or even in homes," Cookson said. "That would be the ultimate goal."

In the meantime, at San Diego Unified, facilities supervisor Naji said he’s definitely interested seeing how well the sensor works. That’s because clean water is so important for the health and growth of kids, such as the ones at Edison Elementary.