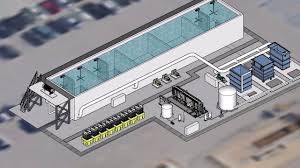 Today, leading edge technological innovations capitalize upon the opportunity to recover wastewater bio-resources that are used for energy generation and agricultural applications. In addition, air emission controls and odor management facilities are integrated in all improvements. More of these forward thinking strategies will become realities at Hyperion in the coming years to better protect our coastal environment and serve our communities. In the late 1800s, wastewater from Pueblo de Nuestra Senora la Reina de Los Angeles was conveyed through natural waterways to the ocean. In 1892, the City purchased 200 acres of oceanfront property and from 1894 until 1925, raw sewage was discharged into near-shore ocean waters at Hyperion's future location.

Visitors to local beaches objected to raw sewage in their recreational waters and in response, the City of Los Angeles built and started operating the first treatment facility at the Hyperion site in 1925: a simple screening plant. This plant remained in operation until 1950.

The screening plant was not effective in preventing beach closures; highly polluted wastewater was still being discharged into near-shore waters.

Just after the end of World War II, the City began to develop plans for a full secondary treatment plant at the Hyperion site. When the new Hyperion Water Reclamation Plant opened in 1950, it included a full secondary treatment system and biosolids processing to produce a heat-dried fertilizer. It was among the first facilities in the world to capture energy from biogas by operating anaerobic digesters, which have yielded a fuel gas by-product for over 50 years. At the time, Hyperion was the first large secondary treatment plant on the West Coast and one of the most modern facilities in the world.

In the 1950s, the population of Los Angeles grew dramatically. To keep up with this growth and the associated high wastewater flows, Hyperion's treatment levels were cut back. By 1957, the new plant was discharging a blend of primary and secondary effluent through a five-mile ocean outfal. Hyperion also stopped its biosolids-to-fertilizer program and began discharging digested sludge into Santa Monica Bay through a separate, seven-mile ocean outfall.

In the 1950s, the population of Los Angeles grew dramatically. To keep up with this growth and the associated higher wastewater flows, Hyperion's treatment levels were cut back. By 1957, the new plant was discharging a blend of secondary and primary effluent through a five-mile ocean outfall. Hyperion also stopped its biosolids-to-fertilizer program and began discharging digested sludge into Santa Monica Bay through a separate, seven-mile ocean outfall.

Today, further improvements at Hyperion are being planned and built to keep the plant on the leading edge of environmental protection. For example, the Digester Gas Utilization Project (DGUP) will reduce the environmental impacts of power and steam generation and utilize HWRP's digester gas for renewable energy generation. More about DGUP

On average 275 million gallons of wastewater enters the Hyperion Water Reclamation Plant on a dry weather day. Because the amount of wastewater entering HWRP can double on rainy days, the plant was designed to accommodate both dry and wet weather days with a maximum daily flow of 450 million gallons of water per day (MGD) and peak wet weather flow of 800 MGD.

Despite Los Angeles having a separate sewer system and storm drain system, some rainfall (which normally flows through the storm drain system) flows into the sewer system through one of the 140,000 sewer maintenance hole covers that make up the Los Angeles area collection system. In addition to rainfall, cracked sewer lines damaged by growing tree roots can sometimes become saturated with urban runoff.

Wastewater is processed and treated using some of the most innovative and time tested methods at Hyperion.

Pretreatment
Anything and everything is found in sewage. At the headworks, the largest solids are removed -  things as big as branches, plastics and rags - as well as smaller solids like sand and other gritty solids. This is called Preliminary Treatment, the first step in wastewater treatment.

Preliminary Treatment consists of a screening process and sand/grit removal. The screening process involves the use of eight bar screens (large metal racks of steel bars spaced 3/4 inches apart) to remove large objects from entering wastewater. A large mechanical rake removes unwanted materials from the bar screen and deposits the various items into a water trough where they are then dewatered and stored in large silos. Once dewatered, the materials (consisting mostly of rags, wood, and other non-recyclable/non-beneficial materials) are then loaded onto a hauling truck and taken to a landfill for disposal. HWRP has recovered a number of unusual objects over the course of the years such as golf balls, wooden 2x4s, a bowling ball, a 17-foot long telephone pole, and a motorcycle.

After the screening process, wastewater flows to aerated grit chambers for sand/grit removal. Sand can enter sewer lines through the washing of dirt in sinks, showers and washing machines. The sand, if left in wastewater as it is being treated, would act as an abrasive in eroding the various downstream pumps, valves, and pipes. Air is pumped into aeration tanks to keep the light organic material suspended while the heavy sand settles to the bottom of the tank. The sand is removed by a pump and the pump sends the sand to the materials handling tower where it is dewatered, washed, stored in a hopper and loaded into trucks and disposed of in a landfill (similar to the process for the bar screen material). More than 885,000 pounds of solids and organic materials flow into the Hyperion Water Reclamation Plant in a 24-hour period.

After leaving the headworks, the wastewater continues to move by gravity to primary treatment.

Primary Treatment
The second step in treating wastewater is Primary Treatment. Wastewater enters the plant at an average speed of two to five feet per second; however, during Primary Treatment, wastewater is slowed to two to three feet per minute. Underground large primary tanks (roughly 300 feet long and 15 feet deep) hold wastewater for two hours, allowing heavy solids to settle to the bottom while oil and grease float to the top. Sometimes chemicals are added to allow more particles to bind together and settle.

These tanks can remove 70-75% of the solids in wastewater and about 50-55% of the organic material. The heavy solids are then removed and transported to the solids handling area of the plant for further processing.

It is an industry standard to measure the organic strength of wastewater by utilizing sampling, inoculation and incubation methods to determine the amount of oxygen consumed by bacteria already present in the wastewater. This measurement of consumed oxygen is called Biochemical Oxygen Demand (BOD). With a proper BOD measurement, the organic strength of the current wastewater can be determined, allowing plant staff to make any necessary adjustments.

Wastewater is then transported from Primary to Secondary Treatment using an Intermediate Pump Station (IPS). The IPS consists of 10 large 12-foot diameter Archimedes Screw Pumps. Each pump can lift 110 to 125 million gallons per day (MGD).

Secondary Treatment is a two stage process. First, in covered, oxygen rich reactor tanks, bacteria living in the wastewater consume most of the remaining organic particles (solids). These "plumped up" bacteria settle to the bottom of the tanks where they are then sent to the clarifiers for final settling and collection.

Solids removed during primary and secondary treatment are pumped to these huge, egg shaped vessels for further processing. The digesters destroy the disease causing organisms (pathogens) in the biosolids.

The solids that were removed from primary and secondary treatment are now pumped into huge, totally enclosed, egg shaped tanks called digesters. Bacteria and other microorganisms that live without oxygen thrive here. It takes about 15 days for these microorganisms to eat half of the biosolids, destroy the pathogens and release a natural methane gas that has tremendous energy value.