In India, job creation the biggest issue in voters’ minds 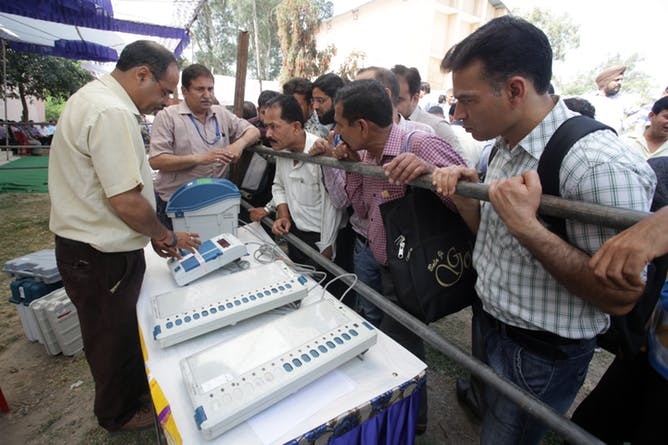 India will go to the polls between April 11 and May 19 for the election of representatives to the country’s lower house Lok Sabha.

As India’s working-age population has increased, unemployment reached a 45-year high in 2017, at 6.1%. Job creation has therefore become one of the most important issues in this election.

In 2014, Prime Minister Narendra Modi came to power by promising to create jobs for millions of Indians. But his program – Make in India – has not created jobs at the rate India needs. Nearly 30% of the respondents of an online poll by The Times Group in mid-February believed job creation was one of the biggest failures of Modi’s government.

From the makeup of its population, India should be reaping demographic dividends, a condition where a country can catapult its economic growth by having more people in the working-age group than dependent population (children and senior citizens).

By next year India is expected to overtake China as the world’s most populous country. In the span of three decades, India is estimated to have added 400 million extra people to its population, taking it to 1.73 billion by 2050. Most of these people will be of working age (15 to 59).

If these people can find productive employment, with decent incomes, this can propel India’s economic development.

But OECD data indicate that more than 30% of India’s 15- to 29-year-olds are neither in schools nor in jobs.

India is thus facing an employment crisis, the magnitude and complexity of which has never been witnessed.

Jobs are disappearing each year. The Centre for Monitoring Indian Economy, a think tank, estimates 11 million jobs were lost in 2018. All India Manufacturers’ Organisation noted that 3.5 million manufacturing jobs were lost between 2016 and 2018.

Modi’s 2016 move to withdraw two of its highest denomination banknotes from the market, amounting to 86% of all currency in circulation, contributed to jobs disappearing.

The banning of Rs500 and Rs1000 from circulation, called demonetisation, was touted to curb corruption and black money. But instead, it resulted in economic chaos all over the country.

There were work stoppages or reductions in all sectors. Prices of agriculture products fell and industrial activities were curtailed, creating widespread economic uncertainties. Even ten months after demonetisation, labour participation rates were 3% lower than what was before.

Rural areas suffered the biggest brunt of job losses in 2018, with 84% of all jobs lost there. Most of those who lost jobs were uneducated and unskilled wage and agricultural labourers and small traders.

Not surprisingly, competition for the few jobs available is fierce. Some 200,000 people sent applications when the city of Mumbai advertised vacancies for 1,137 police constables in 2018, requiring grade 12 education. A constable receives a salary of Rs. 25,000 ($352) per month and a live-in quarter. Among the applicants, 423 had degrees in engineering, 167 had MBAs, and 543 hold postgraduate degrees.

India has many structural problems to solve before good-paying and long-lasting jobs can be created.

There is a mismatch of jobs available and the skills of job-seekers. The formal sector does not contribute much to employment opportunities. Instead, 90% of India’s labour demand comes from informal sectors like day labouring for agriculture, construction, tourism, and other low-paid services and trades.

India’s 789 universities and 37,204 colleges churn out mostly unemployable graduates. For example, 6,214 engineering and technical institutions graduate 1.5 million engineers every year. Many of them do not have the skills required by employers.

Even after graduation, they lack basic work and communication skills. Not surprisingly, unemployment among graduates is 16%, nearly three times the national average.

Furthermore, 38% of students in India do not even complete their primary education. They struggle to read and write. They find it difficult to acquire any skill, which constrains their employment and economic potentials.

Meanwhile, many entry-level jobs are being automated with robots and artificial intelligence. This is also the case for repetitive manufacturing jobs. Such trends are likely to accelerate in the future, reducing the country’s capacity to generate employment.

To solve this, India must increase effective investment in education, improve capacity building at all levels and sectors. The country must also improve health and public services. The government should enhance connectivity across the country by investing in infrastructure.

It is a rather tall order for the country to fulfil over the medium term. But, unless all these enabling conditions are met, jobs creation is likely to remain anaemic.

A determined effort has to be made to create new jobs and maintaining existing ones: otherwise, India’s demographic dividend will remain a mirage.

There is now a distinct possibility that instead of harvesting demographic dividends, India may witness social unrest and greater gender inequality by frustrated, restless and worried young job-seekers.

This article was published by THE CONVERSATION, April 11, 2019.