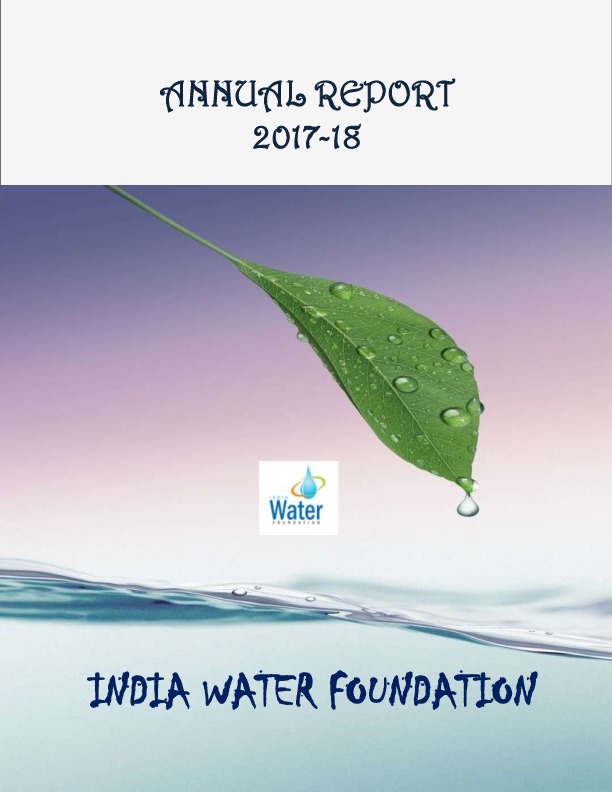 Momentous developments occurring at global, regional and national levels in the realms of water, environment and sustainable development have bearing on the activities of India Water Foundation, both directly and indirectly. Coming into force the Paris Agreement on Climate Change (PACC) and 2030 Agenda along with Sustainable Development Goals (SDGs) along with their targets have emerged as the major determinants of international development discourse impacting almost all levels of development from local to global. Accordingly, the momentous developments that greatly influenced us at India Water Foundation and in a similar way the activities conducted by India Water Foundation (IWF) during 2017-2018 were greatly affected and influenced by significant developments like the similar themes of the 2017 World Water Day as well as 2017 World Water Development Report, which emphasized on wastewater management, release of 2017 Global Outlook of the Water Industry by a private company in Sept 2017,World Bank Report on The New Economics of Water Scarcity and Variability 2017 released in October 2017, Bonn Climate Change Conference (COP 23) convened on 6-17 November 2017 at Bonn in Germany, and US government’s Global Water Strategy 2017 released in Nov 2017.

The 2017 World Water Development Report envisaged a paradigm shift by focusing on wastewater, the vast quantities of which originating from domestic, agricultural and industrial sources discharged into the environment everyday as a valuable resource, which entails the potential of playing critical role in the context of a circular economy, whereby economic development is balanced with the protection of natural resources and environmental sustainability, and where a cleaner and more sustainable economy has a positive effect on the water quality. 2017 Global Outlook of the Water Industry report was released in September 2017 by Frost& Sullivan, a business consulting, asserted that resilience would drive the water industry and address global climate change, water security and rapid urbanization. With its primary focus on urban water management, the report revealed that the demand for sustainable solutions in the municipal segment being driven by huge investments made to build resilient cities across the world, a continual push for circular economy could lead to innovation in making the water infrastructure sustainable. World Bank’s new report – Uncharted Water: The New Economics of Water Scarcity and Variability - launched in October 2017, while referring to the adverse impacts of droughts, also noted that repeated droughts around the world have shockingly large and often hidden consequences, destroying enough farm produce to feed 81 million people every day for a year, damaging forests, and threatening to trap generations of children in poverty.

F 4 India Water Foundation The UN Climate Change Conference also known as COP-23, convened from 6-17 November 2017, in Bonn, Germany under the Presidency of Fiji, adopted 31 decisions, 24 under the COP, seven under the CMP, that, inter alia give guidance on the completion of the Paris Agreement work programme, launch the Talanoa Dialogue (the name for the 2018 Facilitative Dialogue called for by decision 1/COP-21, which adopted the Paris Agreement) and give prominence to the pre-2020 implementation and ambitions under the “Fiji Momentum for Implementation”; decide that the Adaptation Fund shall serve the Paris Agreement subject to decisions to be taken at CMP 1-3; operationalize the local communities and indigenous peoples platform; establish a gender action plan; assess the technical examination process on mitigation and adaptation. The vision articulated in the 2017 Global Water Strategy envisaged a water-secure world, where people and nations have the Water; they need to be healthy, prosperous, and resilient.

In order to advance the vision of the Strategy, this document stressed that the U.S. government would work with partner countries and key stakeholders to achieve four inter-related objectives: (1) increasing access to sustainable safe drinking water and sanitation services, and promoting hygiene; (2) protecting freshwater resources; (3) promoting cooperation on shared waters; and (4) strengthening water governance and financing. Major activities undertaken by India Water Foundation during 2017-2018 veered around major themes of water and climate change, which inter alia, included: exchange and sharing of views on salvaging river Yamuna, rejuvenating river Ganga, managing water resources, climate change, tackling water scarcity, focus on SDGs and proposal for generating awareness among school children about abandoning the use of plastic. It gives me tremendous pleasure in presenting this annual report to our patrons, well-wishers, colleagues and the general public. We, at India Water Foundation, wish to convey our gratitude to all those who stood with us in accomplishing our tasks despite all odds and hope to continue to enjoy their trust and affection. (Dr Arvind Kumar) President India Water Foundation