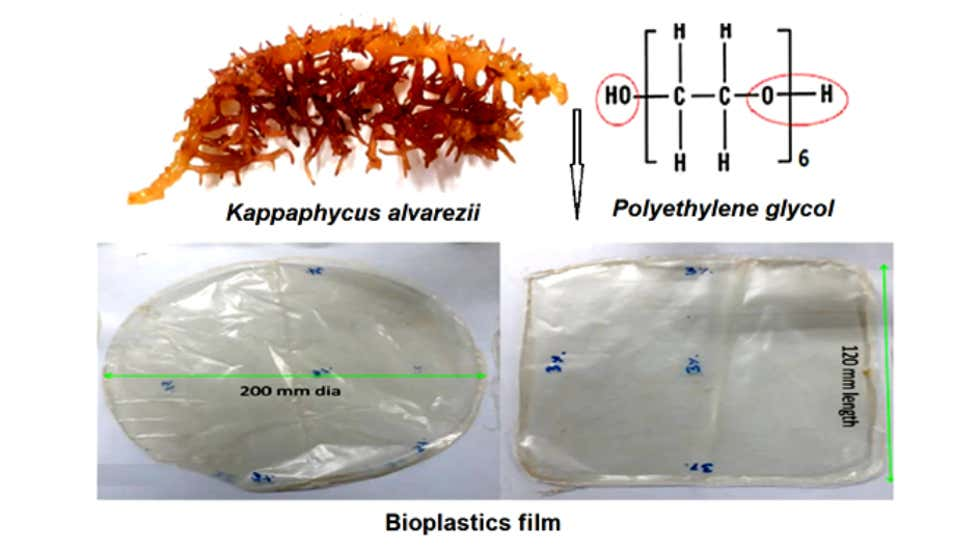 The National Institute of Ocean Technology (NIOT) has developed a bio-plastic film using marine seaweed and PEG-3000. This could be a game-changer in the plastic industry, and have a huge impact on limiting the usage of non-biodegradable plastics.

Bio-plastic films safely breakdown in the environment without leaving any toxicity, but their physical and mechanical properties meet the properties of conventional plastics.

Conventional plastics continue to pose a grave threat due to their interaction with water, which results in the formation of hazardous chemicals that ultimately leach into the environment. Again, other bio-plastics such as those made from plant materials like corn starch and sugarcane, though sold as eco-friendly and renewable, are found to be equivalent to seaweed-based bio-plastic. Conventional plastic, meanwhile, takes hundreds of years to break down.

In their bid to find viable alternatives without hampering the land-based edible plants used for human consumption, scientists have now directed their research to find marine biomass as an alternative to producing biodegradable plastics more sustainably so that biomass used for feedstocks are not disturbed.

In a densely populated country like India, different hazardous plastics are used rampantly due to the need for packaging of different consumer and food products. Researchers from NIOT have now however successfully developed and tested bioplastic films by opting environment-friendly techniques utilizing seaweed. Utilisation of renewable seaweed is one of those options they found viable.

Red algae Kappaphycus alvarezii is a seaweed proven to be an important commercial source of carrageenans and other products that have wide range of industrial applications. These algae are highly colloidal and are found to be cheap to grow within a short cultivation time (45 days) by just using sunlight without the need for freshwater or chemicals. They are also potential sources of polymers, similar to the terrestrial plant-based polymers that are used to manufacture food packaging and carry bags, which facilitate good oxygen and moisture permeability.

As good oxygen and moisture permeability are two essential parameters for the packaging of fresh produce to extend their shelf life, NIOT scientists suggest that red seaweed could be our environmental saviour when it comes to replacing harmful plastics.

The scientists utilised a macro-algae Kappaphycus alvarezii (whole seaweed) which they cultivated in the Gulf of Mannar region for bioplastic film production with the plasticiser polyethylene glycol (PEG)-3000 to achieve higher tensile strength. PEG is a non-toxic and eco-friendly polymer, mainly used to increase the thermos-plasticity of the polymer used in the medicinal fields to make creams and dispersing agents that are used in medicinal products.

The result of the present NIOT study revealed that bio-plastic polymers can biodegrade naturally in a short time without producing any toxic wastes. These can also be disposed of through an ordinary food waste collection mechanism. The study suggests that commercial manufacturing of bio-plastics from this seaweed would be a game-changer in the coming time.