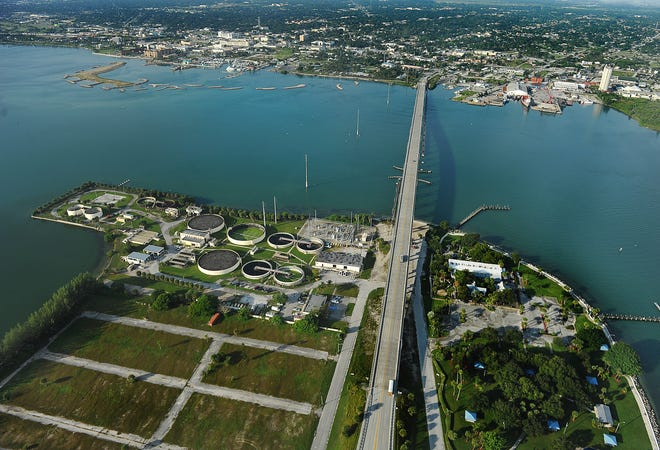 FORT PIERCE — For years, Fort Pierce Utilities Authority and the city have been trying to relocate the aging wastewater-treatment plant off the Indian River Lagoon.

Now, an international water management company said it's interested in partnering with them to do it, but the FPUA director cautioned against moving forward.

FCC Aqualia, the fourth largest water management company in Europe, submitted an unsolicited proposal to the city for a private-public contract to move the wastewater-treatment plant off Hutchinson Island.

"Fort Pierce is a community with water related needs where we could add real value and provide a positive impact towards sustainability by using our experience," FCC Aqualia's Communication Director Ignacio de Ulibarri Sanchez told TCPalm in an email.

City Commissioners did not take any action at Monday's meeting because FCC Aqualia's proposal failed to include financial data. However, commissioners said they would like FCC Aqualia to send the city information that was not included in the unsolicited proposal such as financing, design, construction, operation, maintenance and more.

"This is a big deal, we're looking at a $125 to $150 million project," Commissioner Tom Perona said. "They're (FCC Aqualia) experts in the field, they have many success stories, and I think we at least need to explore the option a little more."

If FCC Aqualia submits the necessary documents, city officials said they hope the Spanish-based water company could work alongside the city, FPUA and St. Lucie County — a preexisting partnership that already has plans to move the wastewater-treatment plant to the Treasure Coast Energy Center on Glades Cut-Off Road in the next 10-20 years.

Although many commissioners were excited to see an international water company interested in Fort Pierce, not everyone was sold on FCC Aqualia.

FPUA Director John Tompeck strongly recommended commissioners do not accept any unsolicited bids related to wastewater plants now or in the future.

"With all due respect, the City Commission should not be accepting proposals for facilities or activities currently run by FPUA," Tompeck said.

FPUA has poured nearly $20 million into studies that determined the Treasure Coast Energy Center as the best relocation option. Tompeck said FPUA is finalizing relocation plans that will be presented at the joint city-FPUA-county meeting in December.

Adding a new company into the mix would only complicate things, Tompeck said.

Tompeck told TCPalm he also had concerns about FCC Aqualia coming to Fort Pierce because the company has never done any projects in the U.S. before.

FCC Aqualia manages 850 water reclamation facilities worldwide, some of which are in Mexico, Egypt, Saudi Arabia and throughout South America and Europe.

"Some of the processes of treating water here are going to be different than treating water in European facilities," Tompeck said. "I'm just not sure how exactly the financing would work out either, nothing is just free."

FCC Aqualia's U.S. Manager Eva Arnaiz said the company is not trying to take away any public ownership and wants to work with partners like FPUA, not against them.

"This would be a collaboration," Arnaiz said. "We will provide the know-how and financing, but the city will control the plant."

Commissioners unanimously agreed they want to maintain relations with partners like FPUA and St. Lucie County, but also said it's worth hearing what other information FCC Aqualia brings forward once they submit financial data and other documents.

"We have all said relocating the wastewater-treatment center is one of our biggest priorities," Mayor Linda Hudson said. "Why would we not explore every avenue?"