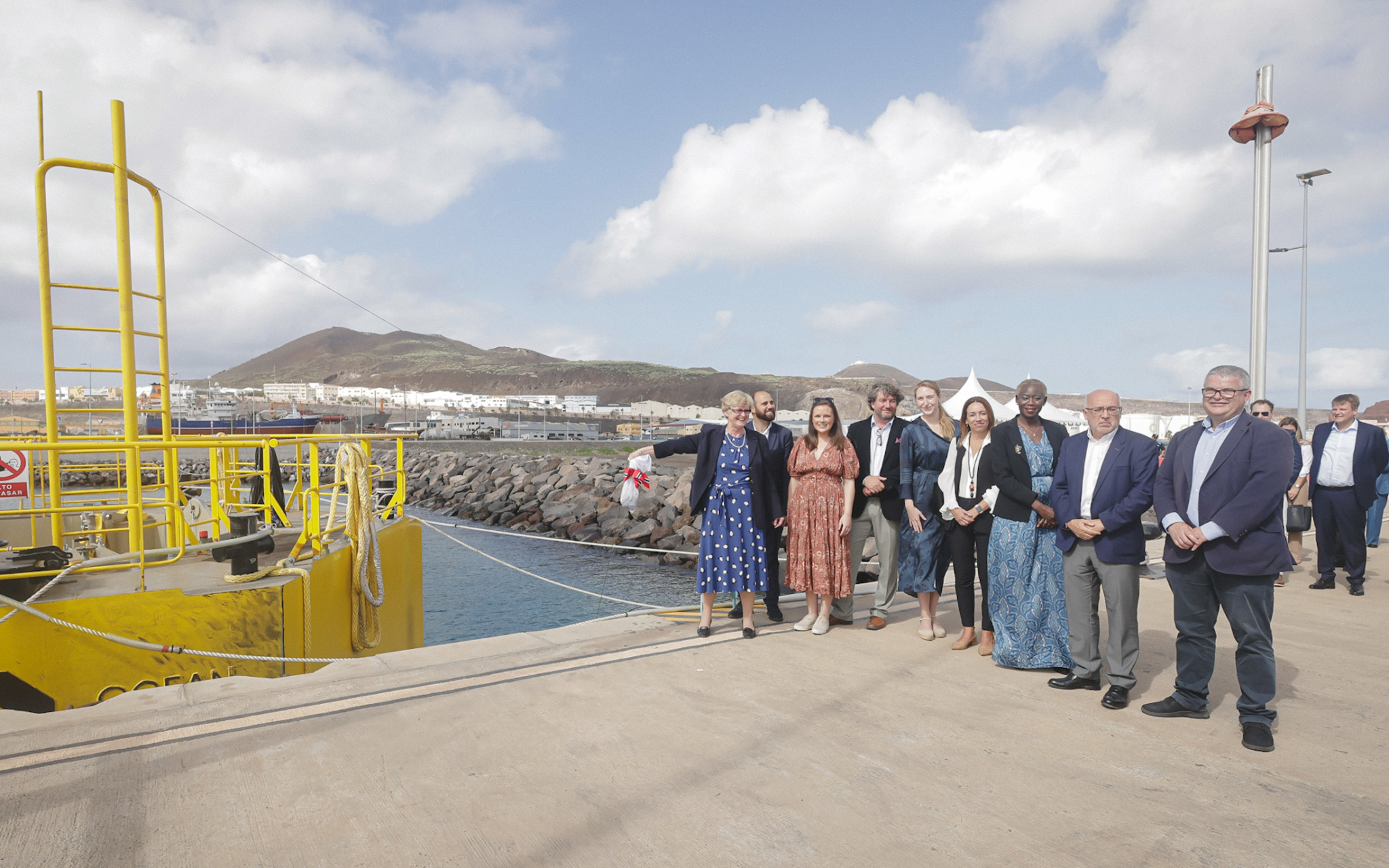 The Norwegian company Ocean Oasis unveiled the prototype of its offshore floating desalination plant at Las Palmas in Gran Canaria. The prototype, named “Gaia”, is powered by wave energy and will be tested at the Oceanic Platform of the Canary Islands (PLOCAN). This technology will allow the production of fresh water from ocean waters by harnessing the energy of the waves to carry out a desalination process and pump potable water to coastal users.

The launch ceremony for the  Gaia  prototype took place at the Juan Sebastián Elcano dock in the port of Las Palmas. It was attended by the General Director of Energy of the Government of the Canary Islands, Rosana Melián, the President of the Cabildo de Gran Canaria, Antonio Morales, the director of PLOCAN, José Joaquín Hernández Brito, as well as the Ocean Oasis team and the Norwegian company Grieg Edge on behalf of their investors.

Ocean Oasis CEO Kristine Bangstad Fredriksen welcomed everyone: “We are looking forward to continuing to develop our activities on the islands. We want this day to be a celebration of our collaboration and what is to come.”

The company’s COO, Sebastián Feimblatt, highlighted that the Canary Islands “provide us with the ideal environment to test our technology both due to PLOCAN’s infrastructure, experience and location, as well as the possibility of developing its solution in a market as relevant as the of the Canary Islands in matters of desalination and offshore activities”. The CTO of Ocean Oasis, Thomas B. Johannessen, explained that the prototype, assembled in the port of Las Palmas, is 7 meters in diameter and 10 meters high and weighs about 100 tons. The device extracts the energy of the waves through the relative movement of two bodies and takes advantage of this energy directly to carry out a desalination process by reverse osmosis without the need to produce electrical energy, thus increasing the efficiency of the process. Gaia will be anchored in the southern area of the PLOCAN test site at Punta de la Mareta.

The General Director of Energy, Rosana Melián, highlighted the progress that the islands represent for becoming a testing platform for new technologies aimed at clean energy. It is becoming the center of attention for large companies that wish to delve into these technologies to advance the progress of the energy transition. She pointed out that all the “green” variants that can be incorporated into the energy range that the Canary Islands projects in the future “will make us take a significant leap in the ambitious decarbonization targets that the islands have set for the years 2030 and 2040”.

Gran Canaria depends on desalinated waater for its survival, and it is more important every day because of the drought. But desalination is a process that consumes a lot of energy. If we consider all the processes necessary to obtain water, this represents between 15 and 20% of the total energy consumption of our territory. In 2016, the Cabildo de Gran Canaria launched the “Renovagua” plan with the aim of reducing the use of conventional energy in the production and distribution of water by 40%. Therefore, we receive these types of innovative initiatives with great interest since they can be a very relevant contribution to guarantee the supply of water and accelerate the energy transition”.

The director of PLOCAN, José Joaquín Hernández Brito, congratulated Ocean Oasis for the desalination prototype that it will test in the PLOCAN test site, an experimentation area that he hopes will be used much more.