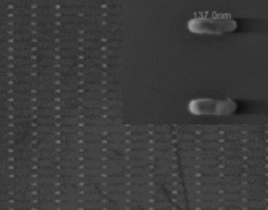 Researchers from the Universities of Bristol and Bedfordshire, in collaboration with multinational company ABB, have designed and tested a series of plasmonic nanoantenna arrays that could lead to the development of a new generation of ultrasensitive and low-cost fluorescence sensors that could be used to monitor water quality. 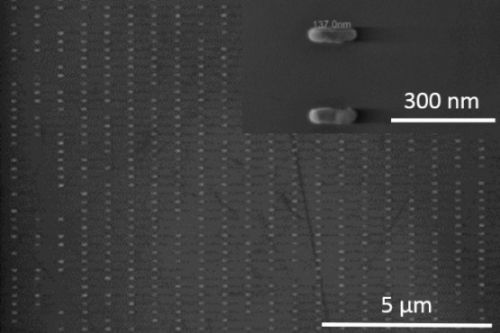 SEM images of nanoantenna array and in the inset a magnified view of the array elements.
Image credit: University of Bristol

The arrays, designed and tested by Dr Neciah Dorh during his PhD at the University of Bristol, are made from aluminium nanorods fabricated using electron beam lithography by commercial partner Kelvin Nanotechnologies. The nanorods, 50nm wide and 158nm long, are designed to resonantly enhance fluorescence emission from a range of contaminants in water such as diesel or tryptophan.

The work, published in Applied Optics, shows a six-fold increase in measured fluorescence emission from a dye. The research also shows that by correctly designing the array element spacing, strongly directional fluorescent emission can be obtained which would allow for highly integrated multi-wavelength sensors to be designed.

The work was carried out in Professor Martin Cryan's research group, which is part of the Photonics Research group in the Department of Electrical and Electronic Engineering.

The project was a collaboration with Dr Andrei Sarua from the School of Physics at Bristol and Dr Tahmina Ajmal from the University of Bedfordshire, who had previously worked on the Aquatest project at Bristol.

Together they developed a prototype low-cost, LED based sensor system, which they plan to develop further into a hand-held field deployable system for performing water quality monitoring.

Martin Cryan, Professor of Applied Electromagnetics and Photonics in the Department of Electrical and Electronic Engineering at the University of Bristol and co-author on the paper, said: "The nanoantenna arrays, which can be fabricated by lower cost production techniques such as nanoimprint lithography, can bring significant sensitivity enhancement so that laboratory quality measurements could be carried out in the field. This would allow for deployment of remote wireless sensor networks for early warning of pollution or continuous monitoring of water quality in sensitive environments."

Dr Dorh, now a Fellow within Bristol’s QTEC programme, has co-founded a start-up, FluoretiQ, developing quantum enhanced fluorescence sensors which will help identify bacteria within minutes rather than days.

Professor Cryan's group is developing systems that could combine the power of nanoantennas with quantum enhanced sensors to produce yet further sensitivity enhancements.