Mathematical Model of Flow in a Meandering Channel 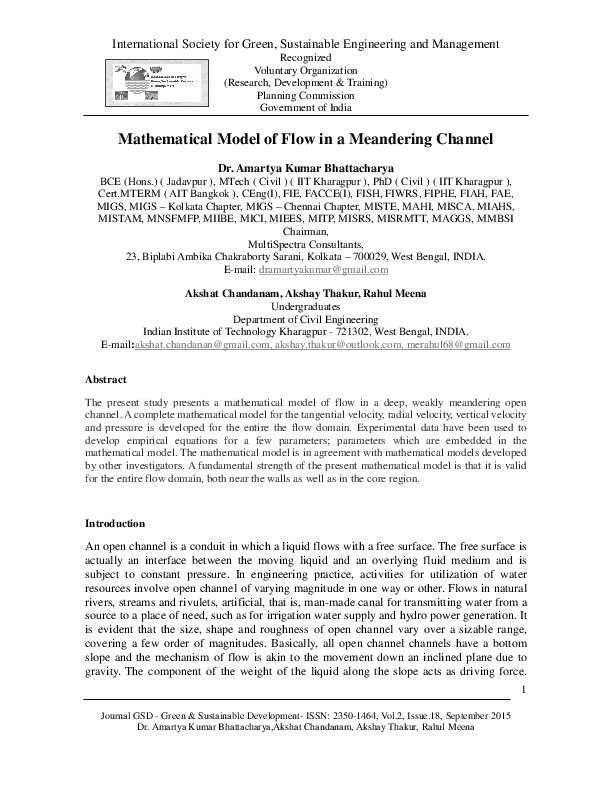 An open channel is a conduit in which a liquid flows with a free surface. The free surface is actually an interface between the moving liquid and an overlying fluid medium and is subject to constant pressure. In engineering practice, activities for utilization of water resources involve open channel of varying magnitude in one way or other. Flows in natural rivers, streams and rivulets, artificial, that is, man-made canal for transmitting water from a source to a place of need, such as for irrigation water supply and hydropower generation. It is evident that the size, shape and roughness of open channel vary over a sizable range, covering a few order of magnitudes. Basically, all open channel channels have a bottom slope and the mechanism of flow is akin to the movement down an inclined plane due to gravity. The component of the weight of the liquid along the slope acts as driving force.

The boundary resistance at the perimeter acts as the resisting force. Water flows in an n channel is largely in the turbulent regime with negligible surface tension effects. In addition, the fact that water behaves as an incompressible fluid leads one to appropriate the importance of the force due to gravity as the major force and the Froude Number as the prime non-dimensional number governing the flow phenomenon in open channels.

Natural channels include all watercourses that exist naturally on the earth, varying in size from tiny hillside rivulets, through brooks, streams, small and large rivers, to tidal estuaries. The hydraulic properties of the natural channels are generally very irregular. In some cases empirical assumption reasonably consistent with actual observations and experience may be made such that the conditions of flows in these channels become amenable to the analytical treatment of theoretical hydraulics.

The artificial channels are those constructed or developed by human effort; navigation channels, power canals, irrigation canals and flumes, floodways etc. as well as model channels that are built at the laboratory for testing purposes. The hydraulic properties of such channels can be either controlled to the extent as desired or designed to meet given requirement. The application of hydraulic theories to artificial channels will, therefore,
produce results fairly close to the actual condition and hence, are reasonably accurate for practical design purposes.

Find the full study attached below.