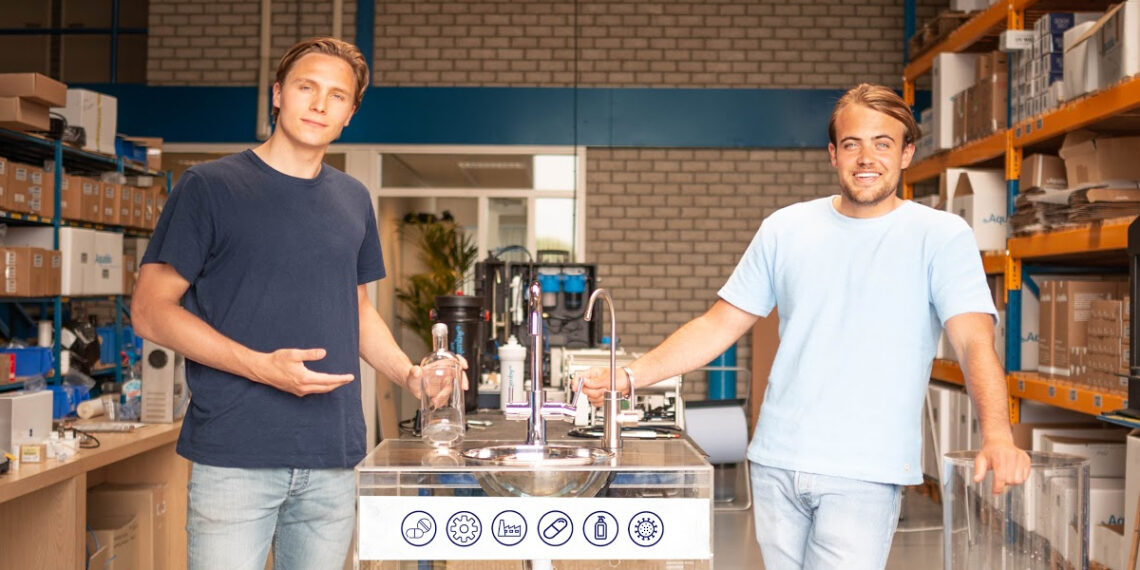 The startup is on a mission to provide safe and clean drinking water for everyone – without using PET bottles. The company built a smart purification system for the consumer market, which is able to guarantee the quality of the drinking water.

For this, Aquablu drew water from the Keizersgracht, Herengracht, and Prinsengracht canals in Amsterdam. The company’s proprietary purification system was installed in a portable case on a boat and the water pumped out of the canals was purified, mineralised, and bottled on the spot. This one-litre limited-edition bottled water was then sold exclusively in the Netherlands via the company website for a premium price of €39.

Talking about the hefty price tag, Stokvis tells Silicon Canals, “It was an arbitrary price, as it was more of a marketing stunt in a way that we wanted to get awareness for both our products and our costs. We chose €39 because the system which we used, had been around in the market for 39 weeks.”

Despite the steep pricing, Aquablu claims that bottled water garnered overwhelming interest and the entire first batch -50 bottles – sold out within a day.

The initiative also proved to be a cogent statement against the entire plastic water bottle industry because it highlighted the wastefulness and unsustainability of the process of shipping water from Fiji to Europe, when the same can be sourced from the canals.

According to the company, the rationale behind this campaign was to prove to the people that the locally-sourced water is better than any other water and it can be procured sans the polluting transport chains and the increasing plastic soup.

Going forward, the startup hopes to utilise this marketing campaign as a platform for raising money for a cause. Aquablu plans to donate all the profits made from the sale of these water bottles to local charities that fight plastic pollution.

How Aquablu was founded?

Having experienced first-hand a major water-centric crisis in South Africa, Stokvis was troubled by the dependence of people back home on plastic water bottles. He got in touch with Zuylen and the duo decided to come up with “a system by means of which no one ever has to rely on plastic drinking water bottles anymore.”

Aquablu has two key products – Aquablu One and Aquablu Pro – currently selling in over thirteen countries worldwide. Apart from these purifiers, the company also sells water softeners that remove limescale from water and prevent its build-up in water pipes, caused by the evaporation of mineral-rich “hard” water.

According to the company, both these purifiers use Artificial Intelligence to monitor and remove contaminants such as hormones, bacteria, viruses, and heavy metals from the water. The purifiers also add essential minerals to the water.

The company is backed by the Stokvis Group—a Netherlands-based firm dealing with engineering, manufacturing, service, and wholesale of winches, capstans, and other large equipment. Back in September 2019, the startup officially became part of the Yes!Delft community – a leading tech incubator in Europe.

Speaking about Aquablu’s future plans, Stokvis says, “We are currently working on having a good relationship with our distributors. Distributing the current products in the European markets will be our focal point for the coming year, and in 2021, we will be most likely launching new products, also to be sold internationally.”

Apart from Aquablu, there are other water tech startups operating in Europe. Although traditional domains such as software, fintech, and health tech, continue to be the sought-after sectors in terms of investment, water tech is gradually catching up and has piqued the interest of major investors in the ecosystem.   There are water tech startups such as Mitte, Stonehouse Water, Watersprint, Seccua, and Desolenator that are engaged in innovative work in the clean drinking water space.

Although Stokvis agrees that there are some big companies dominating the industry, he believes that these big players fail to listen to the customer. “They tend to make one system which they think is best and then plant it all over the world. So the same system is planted in Holland, as well as in the US and China.” They focus on just one solution for the entire world.

Talking about what sets Aquablu apart from its competition, Stokvis says, “all water is different and that the making of drinking water is almost like art.” According to him, the Dutch startup’s differentiating factor is that the company makes a system that is able to adapt itself to every situation.

Considering the massive scale of the crisis surrounding clean water availability, the world needs more water tech startups like Aquablu. “From the canals of Amsterdam to the Ganges River in India; where there is freshwater, we see an opportunity to make an impact,” Stokvis exclaimed.