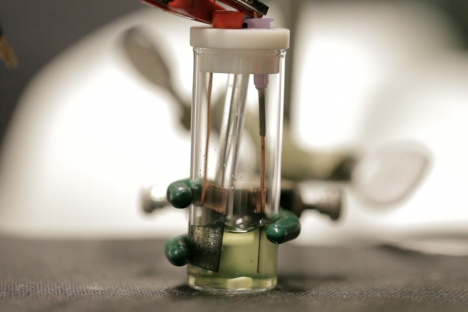 A new method developed at MIT could provide a selective alternative for removing even extremely low levels of unwanted compounds, relying ​on an ​electrochemical ​process to ​selectively ​remove organic ​contaminants. 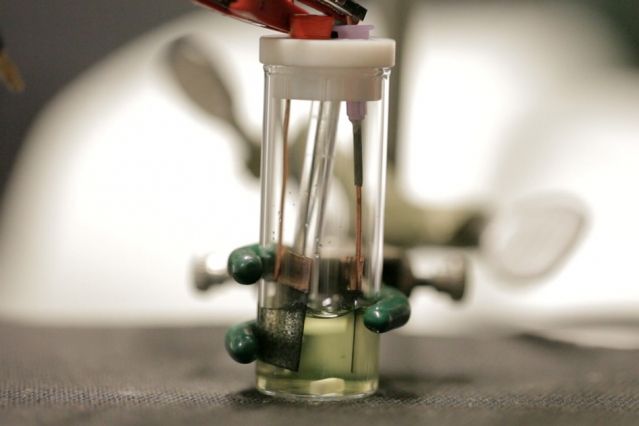 Researchers have developed a new method for removing even extremely low levels of unwanted compounds from water. The new method relies on an electrochemical process to selectively remove organic contaminants such as pesticides, chemical waste products, and pharmaceuticals. Photo: Melanie Gonick/MIT

The new approach is described in the journal Energy and Environmental Science, in a paper by MIT postdoc Xiao Su, Ralph Landau Professor of Chemical Engineering T. Alan Hatton, and five others at MIT and at the Technical University of Darmstadt in Germany.

The system uses a novel method, relying on an electrochemical process to selectively remove organic contaminants such as pesticides, chemical waste products, and pharmaceuticals, even when these are present in small yet dangerous concentrations. The approach also addresses key limitations of conventional electrochemical separation methods, such as acidity fluctuations and losses in performance that can happen as a result of competing surface reactions.

Current systems for dealing with such dilute contaminants include membrane filtration, which is expensive and has limited effectiveness at low concentrations, and electrodialysis and capacitive deionization, which often require high voltages that tend to produce side reactions, Su says. These processes also are hampered by excess background salts.

In the new system, the water flows between chemically treated, or “functionalized,” surfaces that serve as positive and negative electrodes. These electrode surfaces are coated with what are known as Faradaic materials, which can undergo reactions to become positively or negatively charged. These active groups can be tuned to bind strongly with a specific type of pollutant molecule, as the team demonstrated using ibuprofen and various pesticides. The researchers found that this process can effectively remove such molecules even at parts-per-million concentrations.

Previous studies have usually focused on conductive electrodes, or functionalized plates on just one electrode, but these often reach high voltages that produce contaminating compounds. By using appropriately functionalized electrodes on both the positive and negative sides, in an asymmetric configuration, the researchers almost completely eliminated these side reactions. Also, these asymmetric systems allow for simultaneous selective removal of both positive and negative toxic ions at the same time, as the team demonstrated with the herbicides paraquat and quinchlorac.

The same selective process should also be applied to the recovery of high-value compounds in a chemical or pharmaceutical production plant, where they might otherwise be wasted, Su says. “The system could be used for environmental remediation, for toxic organic chemical removal, or in a chemical plant to recover value-added products, as they would all rely on the same principle to pull out the minority ion from a complex multi-ion system.” 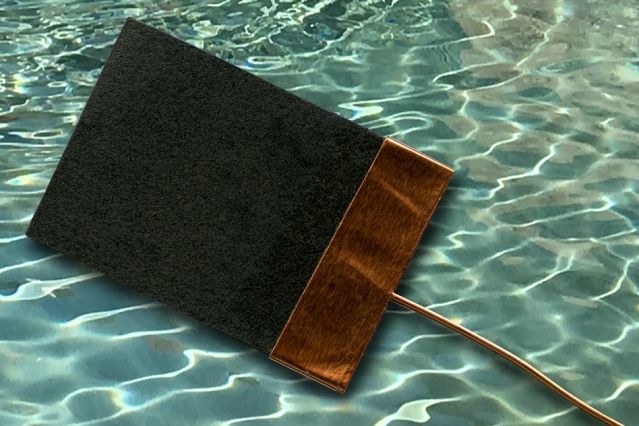 “The system could be used for environmental remediation, for toxic organic chemical removal, or in a chemical plant to recover value-added products, as they would all rely on the same principle to pull out the minority ion from a complex multi-ion system,” MIT postdoc Xiao Su says. Image: Felice Frankel

The system is inherently highly selective, but in practice it would likely be designed with multiple stages to deal with a variety of compounds in sequence, depending on the exact application, Su says. “Such systems might ultimately be useful,” he sugggests, “for water purification systems for remote areas in the developing world, where pollution from pesticides, dyes, and other chemicals are often an issue in the water supply. The highly efficient, electrically operated system could run on power from solar panels in rural areas for example.”

Unlike membrane-based systems that require high pressures, and other electrochemical systems that operate at high voltages, the new system works at relatively benign low voltages and pressures, Hatton says. And, he points out, in contrast to conventional ion exchange systems where release of the captured compounds and regeneration of the adsorbents would require the addition of chemicals, “in our case you can just flip a switch” to achieve the same result by switching the polarity of the electrodes.

This technique “is highly significant, as it extends the capabilities of electrochemical systems from basically nonselective toward highly selective removal of key pollutants,” says Matthew Suss, an assistant professor of mechanical engineering at Technion Institute of Technology in Israel, who was not involved in this work. “As with many emerging water purification techniques, it must still must be tested under real-world conditions and for long periods to check durability. However, the prototype system achieved over 500 cycles, which is a highly promising result.”