In 2014, the United Nations announced that 54% of the global population lived in urban areas and that this figure was expected to rise to 66% by 2050. This rapid urbanisation is the result of population growth and increasing immigration from rural to urban areas in search of better quality of life and more job opportunities.

Levels of urbanisation are currently the highest in developed North America, followed by Latin America, Europe and Oceania. By 2050, Asia and Africa are expected to become the main centres of urban population.

Within Latin America, the fastest-growing cities are São Paulo and the Mexico City Metropolitan Area, which comprises Mexico City and parts of the states of Mexico and Hidalgo.

Cities create opportunities but also present enormous challenges for both governments and the population as a whole. And mobility has become one of these challenges.

Urban sprawl and irregular settlements can make local travel, whether for work or leisure, extremely difficult. In the metropolitan area of Mexico City, for example, travelling 20 km can take three to six hours, whether by car or by public transportation.

For better mobility and security, innovative strategies must be implemented that put people at the centre of development. It is not just about creating ‘mobility as a service’, but about creating people-centred infrastructure so that people are able to reach every part of their city more safely and efficiently, whether for work, commerce or leisure.

Interwoven urban systems have become increasingly complex, and planning has failed to consider the population density of neighbourhoods, the surrounding areas, and urban corridors that should facilitate local travel. Many communities have been severed from areas that should be within walking distance, forcing the use of cars, and thus expanding road networks.

In Mexico as a whole, most cities are divided into a precolonial, historical area and a surrounding irregular transect of American-type developments with clustered residential areas. Many of these arrangements have resulted in suburban zones that sprawl over vast areas and seem to grow with no control whatsoever.

All over the world, outdated, or in some cases improvised, planning rules have created not only serious mobility problems but also insecurity in local communities. Many residential developments have also seen part of their space taken over by growing developments, such as schools, shopping malls, clustered office centres or industrial parks.

A more consequential problem has been the segregation of residents by economic and social status. Over time, society has been divided into groups that cannot coexist as equals.

The time is long past when in an urban sprawl context, people could walk from home to work and have time to spend with family and friends at the end of the day. Most of the day is now spent in commuting.

For better mobility and security, innovative strategies must be implemented that put people at the centre of development. It is not just about creating ‘mobility as a service’, but about creating people-centred infrastructure so that people are able to reach every part of their city more safely and efficiently, whether for work, commerce or leisure.

In the Bajío region of Mexico is the city of Querétaro. With a population of 1.5 million in approximately 324 km2, the city thrives with commercial and industrial development. For improved mobility, the local government has created a system: a high-quality bus-based transit system that delivers fast, comfortable, and cost-effective services at metropolitan scale. It comprises dedicated lanes with busways and stations in the centre of the road, fast and frequent services and off-board fare collection. This is a great step forward in public transportation in a city that up to now has relied mostly on cars.

Cities create opportunities but also present enormous challenges for both governments and the population as a whole. And mobility has become one of these challenges.

Local travel has improved in the city, at least in the historical centre, where activities within a 15-minute walk are encouraged. Other interventions, such as a bicycle-lane network and pedestrian safety programmes are in the making, and are strongly promoted by social committees and non-profit organisations. 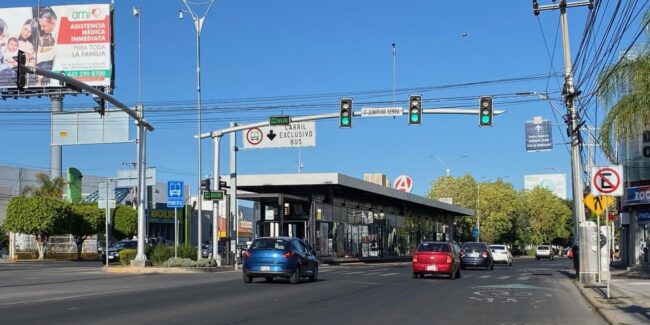 A well managed traffic system and bus bay in the city of Querétaro in Mexico. Photo by Jorge Javier.

Other initiatives include better planning based on local urban conditions and on the density of plots in new developments. They are used to develop residential and commercial zones alongside green areas, to make them more liveable. By reducing the need for frequent cross-town travel, these new areas can result in more sustainable living and working environments.

More efficient public transport systems and intelligent systems can also help promote shared mobility that is safer. By keeping people at the centre of urban development, innovative proposals such as these can be implemented at the city scale, benefitting hundreds of thousands of residents.

Asia has some of the largest cities in the world, and many of them suffer serious constraints due to lack of proper urban development. A change is needed from ever-expanding sprawls to more people-centred urban development.

As members of society, we can contribute towards the liveability of our currently chaotic cities. This includes improved cooperation among citizens to promote mobility that is more efficient and safer as well as activities that will result in better quality of life such as promotion of local commerce, more efficient use of resources like water and raw material, green initiatives to achieve energy savings, more recycling and smart systems based on mobile applications

Liveability should be the aim of every city, large or small, and innovative urban development has the potential to help towards this aim.

Jorge Javier – Architect, faculty coordinator and researcher in the School of Architecture, Universidad Anahuac Querétaro. He is an architect and urban designer. He has designed houses, museums, offices and commercial buildings. His professional development has revolved around three main aspects: design and construction processes, and education around architecture. Jorge has planned, designed, overseen and constructed projects in Mexico and abroad. He teaches architecture at the Universidad Anáhuac, Querétaro campus, from 2010, where he has received the best Professor Award several times. Recently, Jorge became a member of the Citizen Council for Mobility and Urbanism of the city of Querétaro.

This article was published by UNRAVEL, December 1, 2020.