Per- and polyfluoroalkyl substances, or PFAS as they are commonly referred to, have entered our greater society and impacted both our environment and human health.  framergy Inc., with the support of the US Environmental Protection Agency's Small Business Innovation Research (SBIR) program, has shown conclusively that its new materials could be used to break down these substances into non-harmful substances.

With the use of readily available Ultra Violet (UV) light, framergy's titanium Metal-Organic Frameworks (MOFs) photo catalytically breakdown PFAS. The incredible generation of hydroxyl radicals through light (even visible light) exposure to titanium MOFs is even used to kill our greatest scourge, SARS-CoV-2 (COVID-19). framergy demonstrated that these radicals could attack the bonds in PFAS molecules and result in the complete defluorination of the perfluoroalkyl moiety.

PFAS, what the US Food & Drug Administration has coined 'Forever Chemicals,' was very popular with consumer product chemists because their hydrophobic chains allow the material to push water away and create a non-stick coating. The substance can be found in food packaging, cooking apparatuses, and furniture. It is also common in firefighting foams, which has led to significant contamination of water sources where these foams are deployed.

To date, framergy has publicly shown the technology in 'batch' mode.  To optimize commercial use, there was a need for the materials to stay in place within the reactor and not clog up tubing or fittings. The Company's scientists had an innovative idea to attach its MOFs to silica fiber blankets.  PFAS contaminated water could then run through the reactor and blanket, while UV light would shine from the inside of the MOF covered blanket. Initial testing was conducted to prove the photocatalytic reaction while optimizing MOF loading, thickness, and the total strips within the reactor.

Figure 1:  The AYRSORB™ T125 catalyst bed concept was developed to immobilize active MOF particles within the flow-through reactor's annular region. The 1/8" silica fiber strips were placed to act as a host for MOF crystals to grow on.

Twelve MOF-coated (with AYRSORB™ T125) silica strips were successfully prepared where MOFs were grown on silica fibers  in situ  during the solvothermal reaction in the presence of a titanium metal source and the organic ligand. To the author's best knowledge, this is the first coating, at minimum at this scale and in a continuous nature, of titanium MOFs on silica, or for that matter, any substrate.  Two reactors were assembled and tested for flow-through rates.  After photo radiation, a color difference (blue and green) was observed in the silica strips. This color difference was likely due to the thickness of coated strips from different batches synthesized. The coating amount is a step the Company is working to control so that all of the silica strips have a uniform coating and look.

One of the team's challenges was quantifying MOF loading through gravimetric measurements, which resulted in inconclusive outcomes.  Before and after weight measurements were taken, although visual confirmation of fiber modification was made, a weight increase could not be recorded. Further analysis of the reaction byproducts revealed that along with AYRSORB™ T125, disintegrated silica fiber fragments were generated during the process.   The loss of fibers from the strip body caused gravimetric measurements to be inconclusive. Elemental analysis methods such as inductively coupled plasma mass spectrometry will be pursued to quantify the amount of titanium metal on fibers, which should indirectly reveal the amount of seeded MOF on fibers.

However, the strips were analyzed at the Rice University lab for powder X-Ray Diffraction (pXRD) and showed crystalline structures. pXRD revealed a lower intensity AYRSORB™ T125 but was confirmed to be a crystalline material within the silica strip as the low-intensity peaks appear at the angles you would expect for the MOF. This proved that MOFs were seeded and grown on the silica fibers. The residual AYRSORB™ T125 also showed to be crystalline, demonstrating that the MOF was synthesized on and around the silica strip.

Scanning electron microscope (SEM) imagery was ordered by framergy of the silica fibers after the MOF growth process was confirmed by pXRD. The imagery showed the fibers after the solvothermal MOF growth, visually confirming MOF immobilization on the silica bed fibers. This was considered the enabling technical achievement to transition from batch mode treatment to flow-through treatment. 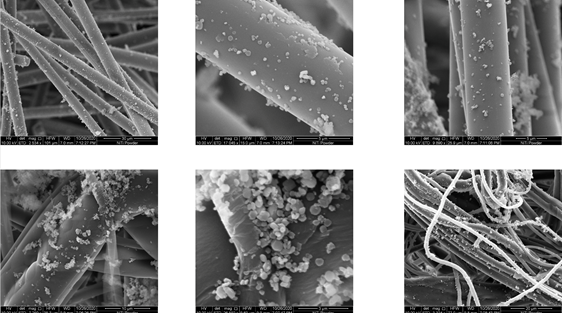 To optimize the photocatalytic reaction conditions, methylene blue (MB) dye was selected to identify reaction parameters' effects. The in-house capability to quantify MB concentrations via ultraviolet-visible spectrophotometry accelerated the development activities, establishing a proven platform for the follow-up PFAS remediation tests. A 1 ppm MB stock solution was prepared for both the silica bed reactor (control without MOFs) and the catalyst bed reactor (titanium MOFs with photocatalytic properties attached to silica bed fibers). The reactors were set up with the influent liquid coming in through a pump to the reactor inlet located at each reactor's bottom end cap. The effluent liquid was directed out of the top end cap of each reactor and into a 600 mL beaker

One sample was taken for every 100 mL (+/- 5 mL) of effluent liquid leaving each reactor. Over the course of testing trials, the silica bed reactor (control) become completely saturated with MB. The samples taken from Reactor 1 were clear until the silica bed became fully saturated. A blue hue could be seen in all of the vials past that point.  Visual observations of both reactor beds point out that the silica bed reactor absorbed and separated MB from the stock solution rather than any degradation via photolysis. At the UV-irradiated section, the catalyst bed reactor showed no MB saturation. This visually confirmed that photocatalytic reaction was taking place initiated by AYRSORB™ T125, consequently degrading MB.

As shown in the literature, at 668 nm, MB shows a characteristic absorbance peak and an inverse transmittance peak. Using the Thermo Scientific GENESYS 30 Visible Spectrophotometer and 2.5 mL cuvettes, data was collected for odd samples in each trial to show an overall trend. The data collected was in terms of absorbance and percent transmittance for each sample. At 668 nm, the influent 1 ppm Methylene Blue solution was at 63.68% transmittance, while fresh DI water was at 101.16% transmittance. The effluent solutions of both reactors were compared to these standards at 668 nm. The AYRSORB™ T125 treated samples had a transmittance close to that of DI water, achieving 95% degradation.