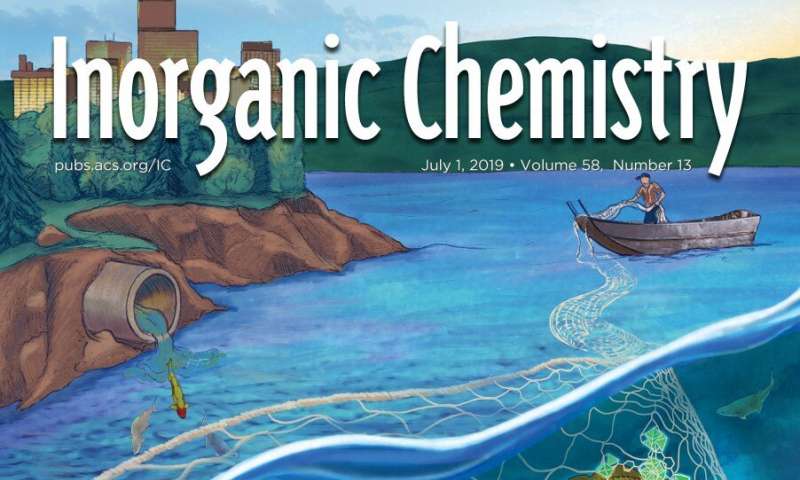 Barely visible material that looks like tiny grains of sand may hold the key to removing an invisible health threat that has contaminated water supplies across the country.

Researchers at Pacific Northwest National Laboratory (PNNL) have successfully tested highly porous materials and found they can absorb key components of a class of toxic chemicals found in 43 states.

Materials scientists at PNNL are experts in optimizing metal organic frameworks or MOFs. These nano-sized porous materials, with metal centers, can attract, hold, and then later release specific chemicals. PNNL researchers recently demonstrated a MOF that quickly takes up fluorinated compounds that were widely used in firefighting foam and non-stick cookware.

These per- and polyfluoroalkyl substances (PFAS) resist grease and water, so they have been used in some food packaging, stain-resistant fabrics and carpets, and cosmetics. Contamination of drinking water is typically associated with a specific facility like a manufacturing plant or military base. PFAS don’t break down in the environment or in human bodies.

According to the Centers for Disease Control and Prevention, more research is needed regarding health effects, but certain human studies have shown that some exposure may affect growth, learning, and behavior of infants and older children, lower a woman’s chance of getting pregnant, interfere with the body’s natural hormones, increase cholesterol levels, affect the immune system, and increase the risk of cancer.

The Environmental Protection Agency advises that the concentration in drinking water be limited to 70 parts per trillion for two of the most common compounds in the class: perfluorooctanesulfonate (PFOS) and perfluorooctanoic acid (PFOA).

Netting contaminant out of the water

With more than 20 years’ experience working with MOFs, the PNNL research team built on past research and hypothesized that a MOF with just the right characteristics could adsorb PFOS from water.

“We are excited to find a MOF that showed excellent capture capabilities at high concentrations of PFOS,” said Radha Motkuri, who leads the materials development team. “We began with two MOF candidates – one with an iron center and another with chromium. The internal structures act like little metal ‘hooks’ that allow the material to hold PFAS compounds.”

Both MOFs worked much better than existing technology, which consists mainly of granular activated carbon filters. But in lab tests reported recently in  Inorganic Chemistry , the chromium-based MOF had an extremely fast capture rate—likely because of its uniform pores, highly active sorbent sites, and internal channels.

“There is a very high chemical affinity with the chromium attracting the sulfur headgroup and fluorine tail on PFOS as observed by our X-ray photoelectron spectroscopy measurements,” said corresponding author Dev Chatterjee. “That’s one reason that it works so well compared to existing activated carbon filters.”

Both the chromium- and iron-based MOFs are stable in water. That’s important because they can be flushed with fresh water to remove the PFOS, plus researchers estimate the material can be reused up to hundreds of times.

MOFs can be thought of as a metallic mesh—rather like a fish net—scooping up PFOS while letting other molecules pass through based on specific parameters.

“It’s the ability to tailor characteristics such as pore size, active sites, orientation and the MOF-chemical interaction that make the PNNL team’s expertise in MOFs so valuable.” said Jennifer Lee, PNNL commercialization manager. “This means that other MOFs may be modified for many additional contaminants and uses.”

To observe the performance, PFOS was combined independently in 5-millimeter vials with the iron MOF, the chromium MOF, or the granular activated carbon in an extremely sensitive spectrometer that showed the concentration of PFOS over time. The chromium-based MOF almost completely adsorbed the contaminant within seconds. There was little to no reduction when using the commercially available activated carbon.

“Pure clean water is so important for all of humanity,” said Motkuri. “We envision a field-deployable system where one day water would run through, contaminants would be captured by the MOF, and clean water would come out.”

Chatterjee and the rest of the team are developing a patent-pending MOF-based electrochemical sensor that would detect ultratrace levels of PFAS contamination and would also help guide cleanup operations.

The work was supported through PNNL’s Laboratory Directed Research and Development Program. Earlier materials development was funded by the Department of Energy’s Geothermal Technologies Office.

This web feature is also available at PNNL News & Media.