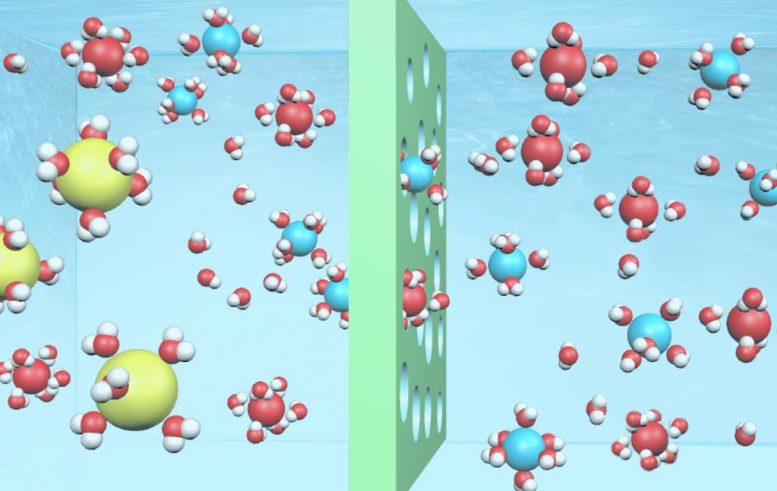 A redox flow battery that could be scaled up for grid-scale energy storage. Credit: Qilei Song, Imperial College London

The new approach to ion exchange membrane design, which was published on December 2, 2019, in  Nature Materials , uses low-cost plastic membranes with many tiny hydrophilic (‘water-attracting’) pores. They improve on current technology that is more expensive and difficult to apply practically.

“Our design hails a new generation of membranes for a variety of uses – both improving lives and boosting storage of renewable energy such as solar and wind power, which will help combat climate change.” — Dr Qilei Song

Current ion exchange membranes, known as Nafion, are used to purify water and store renewable energy output in fuel cells and batteries. However, the ion transport channels in Nafion membranes are not well defined and the membranes are very expensive.

In contrast, low-cost polymer membranes have been widely used in the membrane industry in various contexts, from removal of salt and pollutants from water, to natural gas purification – but these membranes are usually not conductive or selective enough for ion transport.

Now, a multi-institutional team led by Imperial’s Dr Qilei Song and Professor Neil McKeown at the University of Edinburgh has developed a new ion-transport membrane technology that could reduce the cost of storing energy in batteries and of purifying water.

They developed the new membranes based on a class of microporous polymers, known as polymers of intrinsic microporosity (PIMs), and altered their building blocks for varying properties using computer simulations in collaboration with Imperial’s Dr. Kim Jelfs.

Their invention could contribute to the use and storage of renewable energy, and boost the availability of clean drinking water in developing nations.

Lead author Dr. Song, of Imperial’s Department of Chemical Engineering, said: “Our design hails a new generation of membranes for a variety of uses – both improving lives and boosting storage of renewable energy such as solar and wind power, which will help combat climate change.” The polymers are made of rigid and twisted backbones, like fusilli pasta. They contain tiny pores known as ‘micropores’ that provide rigid, ordered channels through which molecules and ions travel selectively based on their physical sizes.

The polymers are also soluble in common solvents so they can be cast into super-thin films, which further speeds up ion transport. These factors mean the new membranes could be used in a wide range of separation processes and electrochemical devices that require fast and selective ion transport.

The team demonstrated that their membranes were highly selective when filtering small salt ions from water, and when removing organic molecules and organic micropollutants for municipal water treatment. Dr Song said: “Such membranes could be used in water nanofiltration systems and produced at a much larger scale to provide drinking water in developing countries.”